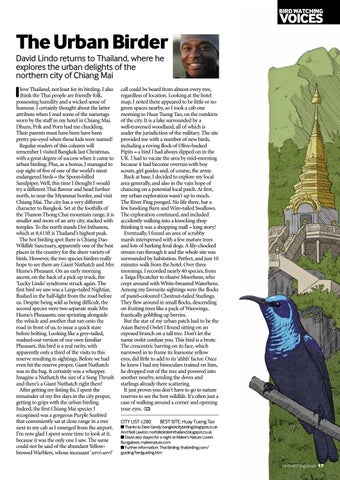 David Lindo returns to Thailand, where he explores the urban delights of the northern city of Chiang Mai

love Thailand, not least for its birding. I also think the Thai people are friendly folk, possessing humility and a wicked sense of humour. I certainly thought about the latter attribute when I read some of the nametags worn by the staff in my hotel in Chiang Mai. Dhum, Prik and Porn had me chuckling. Their parents must have been have been pretty pie-eyed when those kids were named! Regular readers of this column will remember I visited Bangkok last Christmas, with a great degree of success when it came to urban birding. Plus, as a bonus, I managed to cop sight of five of one of the world’s most endangered birds – the Spoon-billed Sandpiper. Well, this time I thought I would try a different Thai flavour and head further north, to near the Myanmar border, and visit Chiang Mai. The city has a very different character to Bangkok. Set at the foothills of the Thanon Thong Chai mountain range, it is smaller and more of an arty city, stacked with temples. To the north stands Doi Inthanon, which at 8,415ft is Thailand’s highest peak. The hot birding spot there is Chiang Dao Wildlife Sanctuary, apparently one of the best places in the country for the sheer variety of birds. However, the two species birders really hope to see there are Giant Nuthatch and Mrs Hume’s Pheasant. On an early morning ascent, on the back of a pick up truck, the ‘Lucky Lindo’ syndrome struck again. The first bird we saw was a Large-tailed Nightjar, flushed in the half-light from the road before us. Despite being sold as being difficult, the second species were two separate male Mrs Hume’s Pheasants; one sprinting alongside the vehicle and another that ran onto the road in front of us, to issue a quick stare before bolting. Looking like a grey-tailed, washed-out version of our own familiar Pheasant, this bird is a real rarity, with apparently only a third of the visits to this reserve resulting in sightings. Before we had even hit the reserve proper, Giant Nuthatch was in the bag. It certainly was a whopper. Imagine a Nuthatch the size of a Song Thrush and there’s a Giant Nuthatch right there! After getting my listing fix, I spent the remainder of my five days in the city proper, getting to grips with the urban birding. Indeed, the first Chiang Mai species I recognised was a gorgeous Purple Sunbird that conveniently sat at close range in a tree next to my cab as I emerged from the airport. I’m now glad I spent some time to look at it, because it was the only one I saw. The same could not be said of the abundant Yellowbrowed Warblers, whose incessant ‘serri-serri’

call could be heard from almost every tree, regardless of location. Looking at the hotel map, I noted there appeared to be little or no green spaces nearby, so I took a cab one morning to Huay Tueng Tao, on the outskirts of the city. It is a lake surrounded by a well-traversed woodland, all of which is under the jurisdiction of the military. The site provided me with a number of new birds, including a roving flock of Olive-backed Pipits – a bird I had always dipped on in the UK. I had to vacate the area by mid-morning because it had become overrun with boy scouts, girl guides and, of course, the army. Back at base, I decided to explore my local area generally, and also in the vain hope of chancing on a potential local patch. At first, my urban exploration wasn’t up to much. The River Ping ponged. No life there, bar a few hawking Barn and Wire-tailed Swallows. The exploration continued, and included accidently walking into a knocking shop thinking it was a shopping mall – long story! Eventually, I found an area of scrubby marsh interspersed with a few mature trees and lots of barking feral dogs. A lily-chocked stream ran through it and the whole site was surrounded by habitation. Perfect, and just 10 minutes walk from the hotel. Over three mornings, I recorded nearly 40 species, from a Taiga Flycatcher to elusive Moorhens, who crept around with White-breasted Waterhens. Among my favourite sightings were the flocks of pastel-coloured Chestnut-tailed Starlings. They flew around in small flocks, descending on fruiting trees like a pack of Waxwings, frantically gobbling up berries. But the star of my urban patch had to be the Asian Barred Owlet I found sitting on an exposed branch on a tall tree. Don’t let the name owlet confuse you. This bird is a brute. The crescentric barring on its face, which narrowed in to frame its fearsome yellow eyes, did little to add to its ‘ahhh’ factor. Once he knew I had my binoculars trained on him, he dropped out of the tree and powered into another nearby, sending the doves and starlings already there scattering. It just proves you don’t have to go to nature reserves to see the best wildlife. It’s often just a case of walking around a corner and opening your eyes. CITY LIST c280