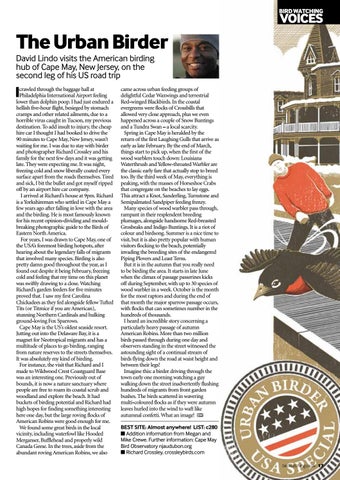 David Lindo visits the American birding hub of Cape May, New Jersey, on the second leg of his US road trip

crawled through the baggage hall at Philadelphia International Airport feeling lower than dolphin poop. I had just endured a hellish five-hour flight, besieged by stomach cramps and other related ailments, due to a horrible virus caught in Tucson, my previous destination. To add insult to injury, the cheap hire car I thought I had booked to drive the 90 minutes to Cape May, New Jersey, wasn’t waiting for me. I was due to stay with birder and photographer Richard Crossley and his family for the next few days and it was getting late. They were expecting me. It was night, freezing cold and snow liberally coated every surface apart from the roads themselves. Tired and sick, I bit the bullet and got myself ripped off by an airport hire car company. I arrived at Richard’s house at 9pm. Richard is a Yorkshireman who settled in Cape May a few years ago after falling in love with the area and the birding. He is most famously known for his recent opinion-dividing and mouldbreaking photographic guide to the Birds of Eastern North America. For years, I was drawn to Cape May, one of the USA’s foremost birding hotspots, after hearing about the legendary falls of migrants that involved many species. Birding is also pretty damn good throughout the year, as I found out despite it being February, freezing cold and feeling that my time on this planet was swiftly drawing to a close. Watching Richard’s garden feeders for five minutes proved that. I saw my first Carolina Chickadees as they fed alongside fellow Tufted Tits (or Titmice if you are American), stunning Northern Cardinals and hulking ground-loving Fox Sparrows. Cape May is the US’s oldest seaside resort. Jutting out into the Delaware Bay, it is a magnet for Neotropical migrants and has a multitude of places to go birding, ranging from nature reserves to the streets themselves. It was absolutely my kind of birding. For instance, the visit that Richard and I made to Wildwood Crest Coastguard Base was an interesting one. Previously out of bounds, it is now a nature sanctuary where people are free to roam its coastal scrub and woodland and explore the beach. It had buckets of birding potential and Richard had high hopes for finding something interesting here one day, but the large roving flocks of American Robins were good enough for me. We found some great birds in the local vicinity, including waterfowl like Hooded Merganser, Bufflehead and properly wild Canada Geese. In the trees, aside from the abundant roving American Robins, we also

came across urban feeding groups of delightful Cedar Waxwings and terrestrial Red-winged Blackbirds. In the coastal evergreens were flocks of Crossbills that allowed very close approach, plus we even happened across a couple of Snow Buntings and a Tundra Swan – a local scarcity. Spring in Cape May is heralded by the return of the first Laughing Gulls that arrive as early as late February. By the end of March, things start to pick up, when the first of the wood warblers touch down: Louisiana Waterthrush and Yellow-throated Warbler are the classic early fare that actually stop to breed too. By the third week of May, everything is peaking, with the masses of Horseshoe Crabs that congregate on the beaches to lay eggs. This attract a Knot, Sanderling, Turnstone and Semipalmated Sandpiper feeding frenzy. Many species of wood warbler pass through, rampant in their resplendent breeding plumages, alongside handsome Red-breasted Grosbeaks and Indigo Buntings. It is a riot of colour and birdsong. Summer is a nice time to visit, but it is also pretty popular with human visitors flocking to the beach, potentially invading the breeding sites of the endangered Piping Plovers and Least Terns. But it is in the autumn that you really need to be birding the area. It starts in late June when the climax of passage passerines kicks off during September, with up to 30 species of wood warbler in a week. October is the month for the most raptors and during the end of that month the major sparrow passage occurs, with flocks that can sometimes number in the hundreds of thousands. I heard an incredible story concerning a particularly heavy passage of autumn American Robins. More than two million birds passed through during one day and observers standing in the street witnessed the astounding sight of a continual stream of birds flying down the road at waist height and between their legs! Imagine this: a birder driving through the town early one morning watching a guy walking down the street inadvertently flushing hundreds of migrants from front garden bushes. The birds scattered in wavering multi-coloured flocks as if they were autumn leaves hurled into the wind to waft like autumnal confetti. What an image! BEST SITE: Almost anywhere! LIST: c280 ■ Addition information from Megan and Mike Crewe. Further information: Cape May Bird Observatory njaudubon.org ■ Richard Crossley, crossleybirds.com birdwatching.co.uk 17