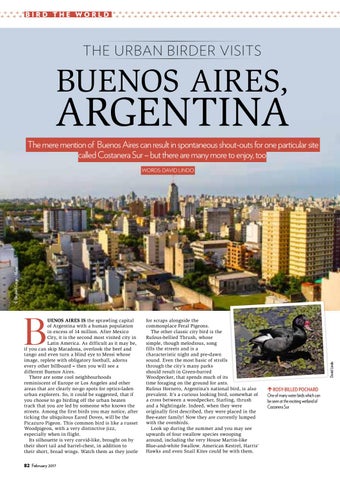 ARGENTINA The mere mention of Buenos Aires can result in spontaneous shout-outs for one particular site called Costanera Sur – but there are many more to enjoy, too

UENOS AIRES IS the sprawling capital of Argentina with a human population in excess of 14 million. After Mexico City, it is the second most visited city in Latin America. As difficult as it may be, if you can skip Maradona, overlook the beef and tango and even turn a blind eye to Messi whose image, replete with obligatory football, adorns every other billboard – then you will see a different Buenos Aires. There are some cool neighbourhoods reminiscent of Europe or Los Angeles and other areas that are clearly no-go spots for optics-laden urban explorers. So, it could be suggested, that if you choose to go birding off the urban beaten track that you are led by someone who knows the streets. Among the first birds you may notice, after ticking the ubiquitous Eared Doves, will be the Picazuro Pigeon. This common bird is like a russet Woodpigeon, with a very distinctive jizz, especially when in flight. Its silhouette is very corvid-like, brought on by their short tail and barrel-chest, in addition to their short, broad wings. Watch them as they jostle

for scraps alongside the commonplace Feral Pigeons. The other classic city bird is the Rufous-bellied Thrush, whose simple, though melodious, song fills the streets and is a characteristic night and pre-dawn sound. Even the most basic of strolls through the city’s many parks should result in Green-barred Woodpecker, that spends much of its time foraging on the ground for ants. Rufous Hornero, Argentina’s national bird, is also prevalent. It’s a curious looking bird, somewhat of a cross between a woodpecker, Starling, thrush and a Nightingale. Indeed, when they were originally first described, they were placed in the Bee-eater family! Now they are currently lumped with the ovenbirds. Look up during the summer and you may see upwards of four swallow species swooping around, including the very House Martin-like Blue-and-white Swallow. American Kestrel, Harris’ Hawks and even Snail Kites could be with them.

THANKS TO... DL: Fantastic guiding by Diego Gallegos (buenosairesbirding.com) Special thanks to Simon Rowland and the team at Wildfoot Travel (wildfoottravel.com) for facilitating my trip.

A nice introduction to birding in Buenos Aires would be to stroll through the parks of Palermo, in the north-east of the city, near the Rio de La Plata. There are number of small lakes that can harbour the very elegant Great Grebe, Redgartered Coot, Neotropic Cormorant and Yellowbilled Duck. Monk Parakeets proliferate, noisily commuting in all directions while, beneath them, the flycatching antics of the utterly gorgeous and super distinctive Great Kiskadee make for highly pleasurable viewing. University City, the site of the University of Buenos Aires, is not the most attractive of areas and its buildings look a little imposing, to say the least. But, it has a very good tidal wetland behind the complex that is decidedly under-watched. Expect the curious Limpkin, which is like a Curlew on hardcore steroids, Wattled Jacana, Cocoi Heron, Southern Lapwing, Roadside Hawk and Ringed Kingfisher. Brown-chested Martin is also easily seen here, along with Rufous-collared Sparrows. One of the better known birding spots in the city is the Vicente López Ecological Reserve. It’s a small site, described as a ‘cozy five hectares’ of humid forest with a pond. Despite its size, there are some great birds to be discovered, including Rufous-headed Crake and the splendid Grey-necked Wood Rail. It’s not all waterbirds, though, because watching for action in the trees, should result in Checkered Woodpecker and several hummers, such as the

Glitter-bellied Emerald. About 25km north of downtown Buenos Aires lies the nature reserve Ribera Norte. On a good day you could see Bare-faced Ibis, Rufescent Tiger Heron and, during the summer, study the heronry, containing vociferous Cocoi Herons, Great and also Snowy Egrets. Now to the city’s birding jewel – Costanera Sur, reclaimed land that is now an exciting wetland, sandwiched between the Rio de La Plata and city skyscrapers. To observe the birds, you have to walk along the main street that runs parallel with the wetland. There is an enormous list for the site that include such beauties as Coscoroba Swan, White-tufted Grebe, Rosy-billed Pochard, Chimango Caracara, Guira Cuckoo and Whitelined Tanager.

KEY SPECIES COSCOROBA SWAN Coscoroba Swan is the smallest swan in the world and a bit of an anomaly. White with the merest of black wing tips they resemble a slim domestic goose with a duck’s bill but with a distinct swan-like vibe. Current genetic studies seem to indicate that they are a sister group to the equally odd Cape Barren Goose. Along with the aforementioned goose, the Coscoroba Swan is a southern South American species breeding in southern Chile, central Argentina south to Tierra del Fuego and the Falkland Islands. It spends the winter further north towards the southernmost tip of Brazil. The key habitats that they favour include lagoons and freshwater marshes in which they tend to be retiring denizens. You may be wondering where the name Coscoroba came from. Well, it’s an onomatopoeia for the honking, goose-like call that the bird produces that is rendered as ‘cos-cor-ooo’. So now you know!