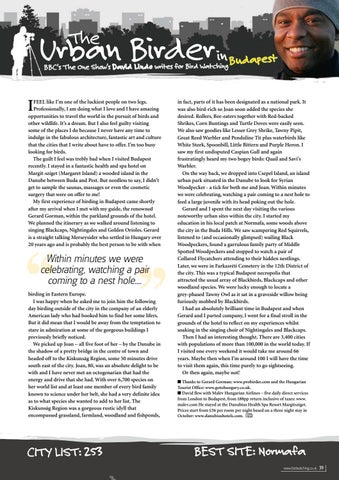 feel like I’m one of the luckiest people on two legs. Professionally, I am doing what I love and I have amazing opportunities to travel the world in the pursuit of birds and other wildlife. It’s a dream. But I also feel guilty visiting some of the places I do because I never have any time to indulge in the fabulous architecture, fantastic art and culture that the cities that I write about have to offer. I’m too busy looking for birds. The guilt I feel was trebly bad when I visited Budapest recently. I stayed in a fantastic health and spa hotel on Margit-sziget (Margaret Island) a wooded island in the Danube between Buda and Pest. But needless to say, I didn’t get to sample the saunas, massages or even the cosmetic surgery that were on offer to me! My first experience of birding in Budapest came shortly after my arrival when I met with my guide, the renowned Gerard Gorman, within the parkland grounds of the hotel. We planned the itinerary as we walked around listening to singing Blackcaps, Nightingales and Golden Orioles. Gerard is a straight talking Merseysider who settled in Hungary over 20 years ago and is probably the best person to be with when

Within minutes we were celebrating, watching a pair coming to a nest hole.... birding in Eastern Europe. I was happy when he asked me to join him the following day birding outside of the city in the company of an elderly American lady who had booked him to find her some lifers. But it did mean that I would be away from the temptation to stare in admiration at some of the gorgeous buildings I previously briefly noticed. We picked up Joan – all five foot of her – by the Danube in the shadow of a pretty bridge in the centre of town and headed off to the Kiskunság Region, some 50 minutes drive south east of the city. Joan, 80, was an absolute delight to be with and I have never met an octogenarian that had the energy and drive that she had. With over 6,700 species on her world list and at least one member of every bird family known to science under her belt, she had a very definite idea as to what species she wanted to add to her list. The Kiskunság Region was a gorgeous rustic idyll that encompassed grassland, farmland, woodland and fishponds,

in fact, parts of it has been designated as a national park. It was also bird-rich so Joan soon added the species she desired. Rollers, Bee-eaters together with Red-backed Shrikes, Corn Buntings and Turtle Doves were easily seen. We also saw goodies like Lesser Grey Shrike, Tawny Pipit, Great Reed Warbler and Penduline Tit plus waterbirds like White Stork, Spoonbill, Little Bittern and Purple Heron. I saw my first undisputed Caspian Gull and again frustratingly heard my two bogey birds: Quail and Savi’s Warbler. On the way back, we dropped into Csepel Island, an island urban park situated in the Danube to look for Syrian Woodpecker - a tick for both me and Joan. Within minutes we were celebrating, watching a pair coming to a nest hole to feed a large juvenile with its head poking out the hole. Gerard and I spent the next day visiting the various noteworthy urban sites within the city. I started my education in his local patch at Normafa, some woods above the city in the Buda Hills. We saw scampering Red Squirrels, listened to (and occasionally glimpsed) wailing Black Woodpeckers, found a garrulous family party of Middle Spotted Woodpeckers and stopped to watch a pair of Collared Flycatchers attending to their hidden nestlings. Later, we were in Farkasréti Cemetery in the 12th District of the city. This was a typical Budapest necropolis that attracted the usual array of Blackbirds, Blackcaps and other woodland species. We were lucky enough to locate a grey-phased Tawny Owl as it sat in a graveside willow being furiously mobbed by Blackbirds. I had an absolutely brilliant time in Budapest and when Gerard and I parted company, I went for a final stroll in the grounds of the hotel to reflect on my experiences whilst soaking in the singing choir of Nightingales and Blackcaps. Then I had an interesting thought. There are 3,400 cities with populations of more than 100,000 in the world today. If I visited one every weekend it would take me around 66 years. Maybe then when I’m around 100 I will have the time to visit them again, this time purely to go sightseeing. Or then again, maybe not! ■ Thanks to Gerard Gorman: www.probirder.com and the Hungarian Tourist Office: www.gotohungary.co.uk. ■ David flew with Malév Hungarian Airlines – five daily direct services from London to Budapest, from £88pp return inclusive of taxes: www. malev.com He stayed at the Danubius Health Spa Resort Margitsziget. Prices start from £56 per room per night based on a three night stay in October: www.danubiushotels.com.