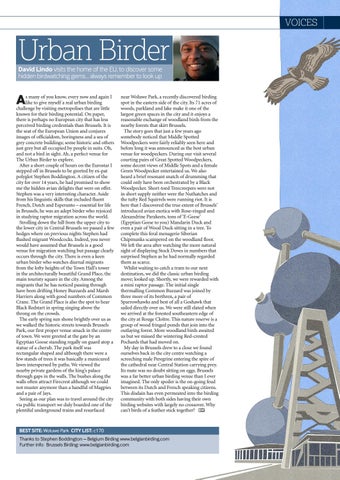 Urban Birder David Lindo visits the home of the EU, to discover some hidden birdwatching gems… always remember to look up

s many of you know, every now and again I like to give myself a real urban birding challenge by visiting metropolises that are little known for their birding potential. On paper, there is perhaps no European city that has less perceived birding credentials than Brussels. It is the seat of the European Union and conjures images of officialdom, boringness and a sea of grey concrete buildings; some historic and others just grey but all occupied by people in suits. Oh, and not a bird in sight. Ah, a perfect venue for The Urban Birder to explore. After a short couple of hours on the Eurostar I stepped off in Brussels to be greeted by ex-pat polyglot Stephen Boddington. A citizen of the city for over 14 years, he had promised to show me the hidden avian delights that were on offer. Stephen was a very interesting character. Aside from his linguistic skills that included fluent French, Dutch and Esperanto – essential for life in Brussels, he was an adept birder who rejoiced in studying raptor migration across the world. Strolling down the hill from the upper city to the lower city in Central Brussels we passed a few hedges where on previous nights Stephen had flushed migrant Woodcocks. Indeed, you never would have assumed that Brussels is a good venue for migration watching but passage clearly occurs through the city. There is even a keen urban birder who watches diurnal migrants from the lofty heights of the Town Hall’s tower in the architecturally beautiful Grand Place, the main touristy square in the city. Among the migrants that he has noticed passing through have been drifting Honey Buzzards and Marsh Harriers along with good numbers of Common Crane. The Grand Place is also the spot to hear Black Redstart in spring singing above the throng on the crowds. The early spring sun shone brightly over us as we walked the historic streets towards Brussels Park, our first proper venue smack in the centre of town. We were greeted at the gate by an Egyptian Goose standing regally on guard atop a statue of a cherub. The park itself was rectangular shaped and although there were a few stands of trees it was basically a manicured lawn interspersed by paths. We viewed the nearby private gardens of the king’s palace through gaps in the walls. The bushes along the walls often attract Firecrest although we could not muster anymore than a handful of Magpies and a pair of Jays. Seeing as our plan was to travel around the city via public transport we duly boarded one of the plentiful underground trains and resurfaced

near Woluwe Park, a recently discovered birding spot in the eastern side of the city. Its 71 acres of woods, parkland and lake make it one of the largest green spaces in the city and it enjoys a reasonable exchange of woodland birds from the nearby forests that skirt Brussels. The story goes that just a few years ago somebody noticed that Middle Spotted Woodpeckers were fairly reliably seen here and before long it was announced as the best urban venue for woodpeckers. During our visit several courting pairs of Great Spotted Woodpeckers, some decent views of Middle Spots and a female Green Woodpecker entertained us. We also heard a brief resonant snatch of drumming that could only have been orchestrated by a Black Woodpecker. Short-toed Treecreepers were not in short supply neither were the Nuthatches and the tufty Red Squirrels were running riot. It is here that I discovered the true extent of Brussels’ introduced avian exotica with Rose-ringed and Alexandrine Parakeets, tons of ‘E-Geese’ (Egyptian Geese to you) Mandarin Duck and even a pair of Wood Duck sitting in a tree. To complete this feral menagerie Siberian Chipmunks scampered on the woodland floor. We left the area after watching the more natural sight of displaying Stock Doves in numbers that surprised Stephen as he had normally regarded them as scarce. Whilst waiting to catch a tram to our next destination, we did the classic urban birding move; looked up. Shortly, we were rewarded with a mini raptor passage. The initial single thermalling Common Buzzard was joined by three more of its brethren, a pair of Sparrowhawks and best of all a Goshawk that sailed directly over us. We were still elated when we arrived at the forested southeastern edge of the city at Rouge Cloître. This nature reserve is a group of wood fringed ponds that join into the outlaying forest. More woodland birds awaited us but we missed the wintering Red-crested Pochards that had moved on. My day in Brussels drew to a close we found ourselves back in the city centre watching a screeching male Peregrine entering the spire of the cathedral near Central Station carrying prey. Its mate was no doubt sitting on eggs. Brussels was a far better urban birding venue than I ever imagined. The only spoiler is the on-going feud between its Dutch and French speaking citizens. This disdain has even permeated into the birding community with both sides having their own birding websites with largely no crossover. Why can’t birds of a feather stick together?