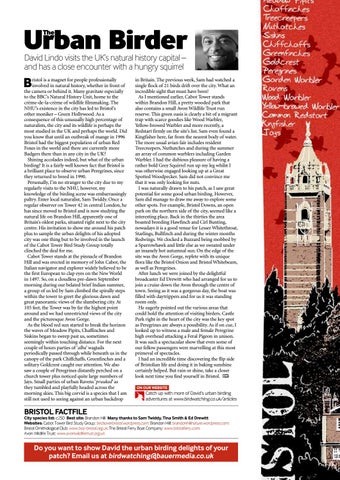 ristol is a magnet for people professionally involved in natural history, whether in front of the camera or behind it. Many gravitate especially to the BBC’s Natural History Unit, home to the crème-de-la-crème of wildlife filmmaking. The NHU’s existence in the city has led to Bristol’s other moniker – Green Hollywood. As a consequence of this unusually high percentage of naturalists, the city and its wildlife is perhaps the most studied in the UK and perhaps the world. Did you know that until an outbreak of mange in 1996 Bristol had the biggest population of urban Red Foxes in the world and there are currently more Badgers there than in any city in the UK? Shining accolades indeed, but what of the urban birding? It is a fairly well known fact that Bristol is a brilliant place to observe urban Peregrines, since they returned to breed in 1990. Personally, I’m no stranger to the city due to my regularly visits to the NHU, however, my knowledge of the birding scene was embarrassingly paltry. Enter local naturalist, Sam Twiddy. Once a regular observer on Tower 42 in central London, he has since moved to Bristol and is now studying the natural life on Brandon Hill, apparently one of Britain’s oldest parks, situated right next to the city centre. His invitation to show me around his patch plus to sample the urban delights of his adopted city was one thing but to be involved in the launch of the Cabot Tower Bird Study Group totally clinched the deal for me. Cabot Tower stands at the pinnacle of Brandon Hill and was erected in memory of John Cabot, the Italian navigator and explorer widely believed to be the first European to clap eyes on the New World in 1497. So, on a cloudless pre-dawn September morning during our belated brief Indian summer, a group of us led by Sam climbed the spirally steps within the tower to greet the glorious dawn and great panoramic views of the slumbering city. At 105 feet, the Tower was by far the highest point around and we had unrestricted views of the city and the picturesque Avon Gorge. As the blood red sun started to break the horizon the waves of Meadow Pipits, Chaffinches and Siskins began to sweep past us, sometimes seemingly within touching distance. For the next couple of hours parties of ‘alba’ wagtails periodically passed through while beneath us in the canopy of the park Chiffchaffs, Greenfinches and a solitary Goldcrest caught our attention. We also saw a couple of Peregrines distantly perched on a church tower plus noticed quite large numbers of Jays. Small parties of urban Ravens ‘pruuked’ as they tumbled and playfully headed across the morning skies. This big corvid is a species that I am still not used to seeing against an urban backdrop

in Britain. The previous week, Sam had watched a single flock of 21 birds drift over the city. What an incredible sight that must have been! As I mentioned earlier, Cabot Tower stands within Brandon Hill, a pretty wooded park that also contains a small Avon Wildlife Trust run reserve. This green oasis is clearly a bit of a migrant trap with scarce goodies like Wood Warbler, Yellow-browed Warbler and more recently, a Redstart firmly on the site’s list. Sam even found a Kingfisher here, far from the nearest body of water. The more usual avian fair includes resident Treecreepers, Nuthatches and during the summer an array of common warblers including Garden Warbler. I had the dubious pleasure of having a rather bold Grey Squirrel run up my leg whilst I was otherwise engaged looking up at a Great Spotted Woodpecker. Sam did not convince me that it was only looking for nuts. I was naturally drawn to his patch, as I saw great potential for some good urban birding. However, Sam did manage to draw me away to explore some other spots. For example, Bristol Downs, an open park on the northern side of the city, seemed like a interesting place. Back in the thirties the area boasted breeding Hawfinch and Cirl Bunting, nowadays it is a good venue for Lesser Whitethroat, Starlings, Bullfinch and during the winter months Redwings. We clocked a Buzzard being mobbed by a Sparrowhawk and little else as we sweated under an insanely hot autumnal sun. On the edge of the site was the Avon Gorge, replete with its unique flora like the Bristol Onion and Bristol Whitebeam, as well as Peregrines. After lunch we were joined by the delightful broadcaster Ed Drewitt who had arranged for us to join a cruise down the Avon through the centre of town. Seeing as it was a gorgeous day, the boat was filled with daytrippers and for us it was standing room only. He eagerly pointed out the various areas that could hold the attention of visiting birders. Castle Park right in the heart of the city was the key spot as Peregrines are always a possibility. As if on cue, I looked up to witness a male and female Peregrine high overhead attacking a Feral Pigeon in unison. It was such a spectacular show that even some of our fellow passengers were marvelling at this most primeval of spectacles. I had an incredible time discovering the flip side of Bristolian life and doing it in baking sunshine certainly helped. But rain or shine, take a closer look next time you find yourself in Bristol. on our website

Catch up with more of David’s urban birding adventures at www.birdwatching.co.uk/articles

Do you want to show David the urban birding delights of your patch? Email us at birdwatching@bauermedia.co.uk