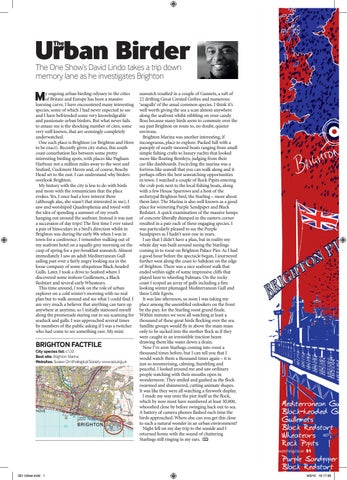 y ongoing urban birding odyssey to the cities of Britain and Europe has been a massive learning curve. I have encountered many interesting species, some of which I had never expected to see and I have befriended some very knowledgeable and passionate urban birders. But what never fails to amaze me is the shocking number of cites, some very well known, that are seemingly completely underwatched. One such place is Brighton (or Brighton and Hove to be exact). Recently given city status, this south coast conurbation lies between some pretty interesting birding spots, with places like Pagham Harbour not a million miles away to the west and Seaford, Cuckmere Haven and, of course, Beachy Head set to the east. I can understand why birders overlook Brighton. My history with the city is less to do with birds and more with the romanticism that the place evokes. Yes, I once had a love interest there (although alas, she wasn’t that interested in me), I saw and worshiped Quadrophenia and toyed with the idea of spending a summer of my youth hanging out around the seafront. Instead it was just a succession of day trips! The first time I ever raised a pair of binoculars in a bird’s direction whilst in Brighton was during the early 90s when I was in town for a conference. I remember walking out of my seafront hotel on a squally grey morning on the cusp of spring for a pre-breakfast seawatch. Almost immediately I saw an adult Mediterranean Gull sailing past over a fairly angry looking sea in the loose company of some ubiquitous Black-headed Gulls. Later, I took a drive to Seaford where I discovered some inshore Guillemots, a Black Redstart and several early Wheatears. This time around, I took on the role of urban explorer on a cold winter’s morning with no real plan but to walk around and see what I could find. I am very much a believer that anything can turn up anywhere at anytime, so I initially stationed myself along the promenade staring out to sea scanning for seaduck and gulls. I was approached several times by members of the public asking if I was a twitcher who had come to see something rare. My mini

seawatch resulted in a couple of Gannets, a raft of 22 drifting Great Crested Grebes and numerous ‘seagulls’ of the usual common species. I think it’s well worth giving the sea a scan almost anywhere along the seafront whilst nibbling on your candy floss because many birds seem to commute over the sea past Brighton en route to, no doubt, quieter environs. Brighton Marina was another interesting, if incongruous, place to explore. Packed full with a panoply of neatly moored boats ranging from small simple fishing crafts to luxury yachts that looked more like floating Bentleys, judging from their car-like dashboards. Encircling the marina was a fortress-like seawall that you can walk along and it perhaps offers the best seawatching opportunities in town. I watched a couple of Rock Pipits entering the crab pots next to the local fishing boats, along with a few House Sparrows and a host of the archetypal Brighton bird, the Starling – more about them later. The Marina is also well known as a good place for wintering Purple Sandpiper and Black Redstart. A quick examination of the massive lumps of concrete liberally dumped in the eastern corner resulted in a pair each of these engaging species. I was particularly pleased to see the Purple Sandpipers as I hadn’t seen one in years. I say that I didn’t have a plan, but in reality my whole day was built around seeing the Starlings coming in to roost on Brighton Palace Pier. As I had a good hour before the spectacle began, I journeyed further west along the coast to Saltdean on the edge of Brighton. There was a nice seafront walk that ended within sight of some impressive cliffs that played host to wheeling Fulmars. On the rocky coast I scoped an array of gulls including a fine looking winter plumaged Mediterranean Gull and three Little Egrets. It was late afternoon, so soon I was taking my place among the assembled onlookers on the front by the pier, for the Starling roost grand finale. Within minutes we were all watching at least a thousand of these great birds flocking over the sea. Satellite groups would fly in above the main mass only to be sucked into the mother flock as if they were caught in an irresistible traction beam drawing them like water down a drain. Now I’ve seen Starlings coming into roost a thousand times before, but I can tell you that I would watch them a thousand times again – it is just so mesmerising, calming, humbling and peaceful. I looked around me and saw ordinary people watching with their mouths open in wonderment. They smiled and gushed as the flock swarmed and shimmered, cutting animate shapes. It was like they were all watching a firework display. I made my way onto the pier itself as the flock, which by now must have numbered at least 30,000, whooshed close by before swinging back out to sea. A battery of camera phones flashed each time the birds approached. Where else can you get this close to such a natural wonder in an urban environment? Night fell on my day trip to the seaside and I returned home with the sound of chattering Starlings still ringing in my ears. www.birdwatching.co.uk 51