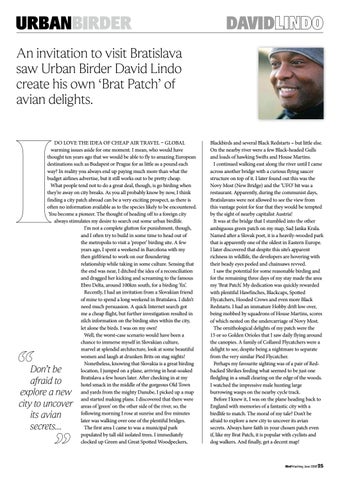 An invitation to visit Bratislava saw Urban Birder David Lindo create his own ‘Brat Patch’ of avian delights. do love the idea of cheap air travel – global warming issues aside for one moment. I mean, who would have thought ten years ago that we would be able to fly to amazing European destinations such as Budapest or Prague for as little as a pound each way? In reality you always end up paying much more than what the budget airlines advertise, but it still works out to be pretty cheap. What people tend not to do a great deal, though, is go birding when they’re away on city breaks. As you all probably know by now, I think finding a city patch abroad can be a very exciting prospect, as there is often no information available as to the species likely to be encountered. You become a pioneer. The thought of heading off to a foreign city always stimulates my desire to search out some urban birdlife. I’m not a complete glutton for punishment, though, and I often try to build in some time to head out of the metropolis to visit a ‘proper’ birding site. A few years ago, I spent a weekend in Barcelona with my then girlfriend to work on our floundering relationship while taking in some culture. Sensing that the end was near, I ditched the idea of a reconciliation and dragged her kicking and screaming to the famous Ebro Delta, around 100km south, for a birding ‘fix’. Recently, I had an invitation from a Slovakian friend of mine to spend a long weekend in Bratislava. I didn’t need much persuasion. A quick Internet search got me a cheap flight, but further investigation resulted in zilch information on the birding sites within the city, let alone the birds. I was on my own! Well, the worst-case scenario would have been a chance to immerse myself in Slovakian culture, marvel at splendid architecture, look at some beautiful women and laugh at drunken Brits on stag nights! Nonetheless, knowing that Slovakia is a great birding location, I jumped on a plane, arriving in heat-soaked Bratislava a few hours later. After checking in at my hotel smack in the middle of the gorgeous Old Town and yards from the mighty Danube, I picked up a map and started making plans. I discovered that there were areas of ‘green’ on the other side of the river, so, the following morning I rose at sunrise and five minutes later was walking over one of the plentiful bridges. The first area I came to was a municipal park populated by tall old isolated trees. I immediately clocked up Green and Great Spotted Woodpeckers,

Don’t be afraid to explore a new city to uncover its avian secrets...

Blackbirds and several Black Redstarts – but little else. On the nearby river were a few Black-headed Gulls and loads of hawking Swifts and House Martins. I continued walking east along the river until I came across another bridge with a curious flying saucer structure on top of it. I later found out this was the Novy Most (New Bridge) and the ‘UFO’ bit was a restaurant. Apparently, during the communist days, Bratislavans were not allowed to see the view from this vantage point for fear that they would be tempted by the sight of nearby capitalist Austria! It was at the bridge that I stumbled into the other ambiguous green patch on my map, Sad Janka Krala. Named after a Slovak poet, it is a heavily-wooded park that is apparently one of the oldest in Eastern Europe. I later discovered that despite this site’s apparent richness in wildlife, the developers are hovering with their beady eyes peeled and chainsaws revved. I saw the potential for some reasonable birding and for the remaining three days of my stay made the area my ‘Brat Patch’. My dedication was quickly rewarded with plentiful Hawfinches, Blackcaps, Spotted Flycatchers, Hooded Crows and even more Black Redstarts. I had an immature Hobby drift low over, being mobbed by squadrons of House Martins, scores of which nested on the undercarriage of Novy Most. The ornithological delights of my patch were the 15 or so Golden Orioles that I saw daily flying around the canopies. A family of Collared Flycatchers were a delight to see, despite being a nightmare to separate from the very similar Pied Flycatcher. Perhaps my favourite sighting was of a pair of Redbacked Shrikes feeding what seemed to be just one fledgling in a small clearing on the edge of the woods. I watched the impressive male hunting large burrowing wasps on the nearby cycle track. Before I knew it, I was on the plane heading back to England with memories of a fantastic city with a birdlife to match. The moral of my tale? Don’t be afraid to explore a new city to uncover its avian secrets. Always have faith in your chosen patch even if, like my Brat Patch, it is popular with cyclists and dog walkers. And finally, get a decent map!