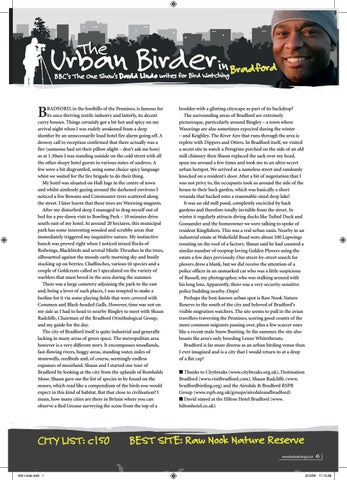 RADFORD, in the foothills of the Pennines, is famous for its once thriving textile industry and latterly, its decent curry houses. Things certainly got a bit hot and spicy on my arrival night when I was rudely awakened from a deep slumber by an unnecessarily loud hotel fire alarm going off. A drowsy call to reception confirmed that there actually was a fire (someone had set their pillow alight – don’t ask me how) so at 1.30am I was standing outside on the cold street with all the other sleepy hotel guests in various states of undress. A few were a bit disgruntled, using some choice spicy language whist we waited for the fire brigade to do their thing. My hotel was situated on Hall Ings in the centre of town and whilst aimlessly gazing around the darkened environs I noticed a few Rowans and Cotoneaster trees scattered along the street. I later learnt that these trees are Waxwing magnets. After my disturbed sleep I managed to drag myself out of bed for a pre-dawn visit to Bowling Park – 10 minutes drive south-east of my hotel. At around 20 hectares, this municipal park has some interesting wooded and scrubby areas that immediately triggered my inquisitive nature. My instinctive hunch was proved right when I noticed mixed flocks of Redwings, Blackbirds and several Mistle Thrushes in the trees, silhouetted against the moody early morning sky and busily stocking up on berries. Chaffinches, various tit species and a couple of Goldcrests called as I speculated on the variety of warblers that must breed in the area during the summer. There was a large cemetery adjoining the park to the east and, being a lover of such places, I was tempted to make a beeline for it via some playing fields that were covered with Common and Black-headed Gulls. However, time was not on my side as I had to head to nearby Bingley to meet with Shaun Radcliffe, Chairman of the Bradford Ornithological Group, and my guide for the day. The city of Bradford itself is quite industrial and generally lacking in many areas of green space. The metropolitan area however is a very different story. It encompasses woodlands, fast-flowing rivers, boggy areas, standing water, miles of stonewalls, reedbeds and, of course, seemingly endless expanses of moorland. Shaun and I started our tour of Bradford by looking at the city from the uplands of Rombalds Moor. Shaun gave me the list of species to be found on the moors, which read like a compendium of the birds you would expect in this kind of habitat. But that close to civilisation? I mean, how many cities are there in Britain where you can observe a Red Grouse surveying the scene from the top of a

boulder with a glinting cityscape as part of its backdrop? The surrounding areas of Bradford are extremely picturesque, particularly around Bingley – a town where Waxwings are also sometimes expected during the winter – and Keighley. The River Aire that runs through the area is replete with Dippers and Otters. In Bradford itself, we visited a secret site to watch a Peregrine perched on the side of an old mill chimney then Shaun replaced the sack over my head, spun me around a few times and took me to an ultra-secret urban hotspot. We arrived at a nameless street and randomly knocked on a resident’s door. After a bit of negotiation that I was not privy to, the occupants took us around the side of the house to their back garden, which was basically a short veranda that backed onto a reasonable-sized deep lake! It was an old mill pond, completely encircled by back gardens and therefore totally invisible from the street. In winter it regularly attracts diving ducks like Tufted Duck and Goosander and the homeowner we were talking to spoke of resident Kingfishers. This was a real urban oasis. Nearby in an industrial estate at Wakefield Road were about 100 Lapwings roosting on the roof of a factory. Shaun said he had counted a similar number of rooptop loving Golden Plovers using the estate a few days previously. Our street-by-street search for plovers drew a blank, but we did receive the attention of a police officer in an unmarked car who was a little suspicious of Russell, my photographer, who was stalking around with his long lens. Apparently, there was a very security-sensitive police building nearby. Oops! Perhaps the best-known urban spot is Raw Nook Nature Reserve to the south of the city and beloved of Bradford’s visible migration watchers. The site seems to pull in the avian travellers traversing the Pennines, scoring good counts of the more common migrants passing over, plus a few scarcer ones like a recent male Snow Bunting. In the summer, the site also boasts the area’s only breeding Lesser Whitethroats. Bradford is far more diverse as an urban birding venue than I ever imagined and is a city that I would return to at a drop of a flat cap! ■ Thanks to Citybreaks (www.citybreaks.org.uk), Destination Bradford (www.visitbradford.com), Shaun Radcliffe (www. bradfordbirding.org) and the Airedale & Bradford RSPB Group (www.rspb.org.uk/groups/airedaleandbradford) ■ David stayed at the Hilton Hotel Bradford (www. hiltonhotel.co.uk)