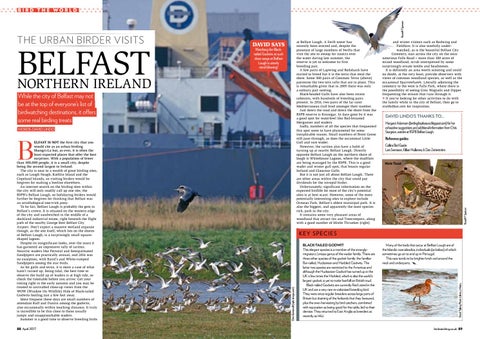 Watching the Blacktailed Godwits at such close range at Belfast Lough is utterly mind-blowing!

NORTHERN IRELAND While the city of Belfast may not be at the top of everyone’s list of birdwatching destinations, it offers some real birding treats

ELFAST IS NOT the first city that you would cite as an urban birding Shangri-La but, as ever, it is often the least expected places that offer the best surprises. With a population of fewer than 300,000 people, it is a small city, despite being the second largest in Ireland. The city is near to a wealth of great birding sites, such as Lough Neagh, Rathlin Island and the Copeland Islands, so visiting birders would be forgiven for making a beeline elsewhere. An internet search on the birding sites within the city will only readily call up one site, the RSPB’s Belfast Lough, so holidaying birders would further be forgiven for thinking that Belfast was an ornithological one-trick pony. To be fair, Belfast Lough is probably the gem in Belfast’s crown. It is situated on the western edge of the city and sandwiched in the middle of a dockland industrial estate, right beneath the flight path of the nearby George Best Belfast City Airport. Don’t expect a massive wetland expanse though, as the site itself, which lies on the shores of Belfast Lough, is a surprisingly small squareshaped lagoon. Despite its insignificant looks, over the years it has garnered an impressive tally of rarities. Nearctic waders like Pectoral and Semipalmated Sandpipers are practically annual, and 2016 was no exception, with Baird’s and White-rumped Sandpipers among the star birds. As for gulls and terns, it is more a case of what hasn’t turned up. Being tidal, the best time to observe the build up of waders is at high tide, so check the timetable before you arrive. Get your timing right in the early autumn and you may be treated to unrivalled close-up views from the WOW (Window On Wildlife) Hide of Black-tailed Godwits feeding just a few feet away. More frequent these days are small numbers of attendant Ruff and Dunlin among the godwits, also occasionally within touching distance. It truly is incredible to be this close to these usually jumpy and unapproachable waders. Summer is a good time to observe breeding birds

and winter visitors such as Redwing and Fieldfare. It is also woefully underwatched, as is the beautiful Belfast City Cemetery, east across the city on the once notorious Falls Road – more than 100 acres of mixed woodland, scrub interspersed by some surprisingly ornate tombs and headstones. It is definitely an area worth scouting and could no doubt, at the very least, provide observers with views of common woodland species, as well as the occasional Sparrowhawk. Literally adjoining the cemetery to the west is Falls Park, where there is the possibility of seeing Grey Wagtails and Dipper frequenting the stream that runs through it.  If you’re looking for other activities to do with the family while in the city of Belfast, then go to visitbelfast.com for inspiration.

at Belfast Lough. A Swift tower has recently been erected and, despite the presence of large numbers of Swifts that visit the site to swoop for insects over the water during late summer, the reserve is yet to welcome its first breeding pair. A few pairs of Lapwing and Redshank have started to breed but it is the terns that steal the show. Some 500 pairs of Common Terns (above) patronise the two tern rafts that are in place. This is remarkable given that in 2005 there was only a solitary pair nesting. Black-headed Gulls have also been recent colonists, with hundreds of breeding pairs present. In 2016, two pairs of the far rarer Mediterranean Gull bred amongst their number. Just down the road and down the shore from the RSPB reserve is Kinnegar. In days gone by it was a good spot for waterfowl like Red-breasted Merganser and waders. Sadly, numbers of all the species that frequented this spot seem to have plummeted for some inexplicable reason. Small numbers of Brent Geese still pass through, as does the occasional Little Gull and rare wader. However, the rarities also have a habit of turning up at nearby Belfast Lough. Directly opposite Belfast Lough on the northern shore of lough is Whitehouse Lagoon, where the mudflats are being managed by the RSPB. This is a good wader and winter gull spot, that boasts regular Iceland and Glaucous Gulls. But it is not just all about Belfast Lough. There are other areas within the city that could pay dividends for the intrepid birder. Unfortunately, significant information on the expected birdlife for most of the city’s potential sites is at best scant. However, some of the more potentially interesting sites to explore include Ormeau Park, Belfast’s oldest municipal park. It is also the biggest, and apparently the most species rich, park in the city. It contains some very pleasant areas of woodland that attract tits and Treecreepers, along with a good number of Mistle Thrushes (right)

BLACK-TAILED GODWIT This elegant species is a member of the stronglymigratory Limosa genus of the wader family. There are three other species of the godwit family: the familiar Bar-tailed, Hudsonian and Marbled Godwits. The latter two species are restricted to the Americas and although the Hudsonian Godwit has turned up in the UK a few times the Marbled, which is also the world’s largest godwit, is yet to make footfall on British mud. Black-tailed Godwits are currently Red Listed in the UK and are a very rare re-colonised breeding bird. They were once regular breeders across large parts of Britain but draining of the fenlands that they favoured, plus the over-harvesting by bird catchers, combined with reputation as being good for the table, led to their demise. They returned to East Anglia as breeders as recently as 1952.

Many of the birds that occur at Belfast Lough are of the Islandic race islandica, individuals (as below) of which sometimes go on to end up in Portugal. This race tends to be brighter brick-red around the neck and underparts.