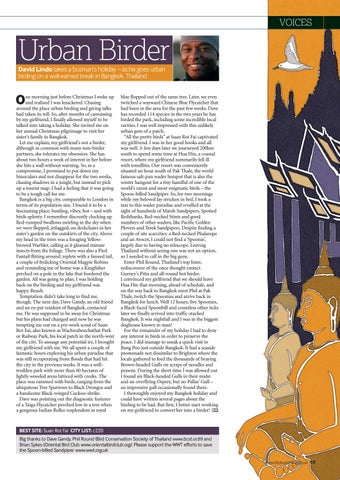 Urban Birder David Lindo takes a busman’s holiday – as he goes urban birding on a well-earned break in Bangkok, Thailand

ne morning just before Christmas I woke up and realised I was knackered. Chasing around the place urban birding and giving talks had taken its toll. So, after months of canvassing by my girlfriend, I finally allowed myself to be talked into taking a holiday. She invited me on her annual Christmas pilgrimage to visit her sister’s family in Bangkok. Let me explain; my girlfriend’s not a birder, although in common with many non-birder partners, she tolerates my obsession. She has about two hours a week of interest in her before she hits a wall without warning. So, as a compromise, I promised to put down my binoculars and not disappear for the two weeks, chasing shadows in a jungle, but instead to pick up a tourist map. I had a feeling that it was going to be a tough call for me. Bangkok is a big city, comparable to London in terms of its population size. I found it to be a fascinating place; bustling, vibey, hot – and with birds aplenty. I remember discreetly clocking up Red-rumped Swallows swirling in the sky when we were flopped, jetlagged, on deckchairs in her sister’s garden on the outskirts of the city. Above my head in the trees was a foraging Yellowbrowed Warbler, calling as it gleaned minute insects from the foliage. There was also a Pied Fantail flitting around, replete with a fanned tail, a couple of frolicking Oriental Magpie Robins and reminding me of home was a Kingfisher perched on a pole in the lake that bordered the garden. All was going to plan. I was holding back on the birding and my girlfriend was happy. Result. Temptation didn’t take long to find me, though. The next day, Dave Gandy, an old friend and an ex-pat resident of Bangkok, contacted me. He was supposed to be away for Christmas but his plans had changed and now he was tempting me out on a pre-work scout of Suan Rot Fai, also known as Wachirabenchathat Park or Railway Park, his local patch in the north-west of the city. To assuage any potential ire, I brought my girlfriend with me. We all spent a couple of fantastic hours exploring his urban paradise that was still recuperating from floods that had hit the city in the previous weeks. It was a welltrodden park with more than 60 hectares of lightly wooded areas latticed with creeks. The place was rammed with birds, ranging from the ubiquitous Tree Sparrows to Black Drongos and a handsome Black-winged Cuckoo-shrike. Dave was pointing out the diagnostic features of a Taiga Flycatcher perched low in a tree when a gorgeous Indian Roller resplendent in royal

blue flopped out of the same tree. Later, we even twitched a wayward Chinese Blue Flycatcher that had been in the area for the past few weeks. Dave has recorded 114 species in the two years he has birded the park, including some incredible local rarities. I was well impressed with this unlikely urban gem of a patch. “All the pretty birds” at Suan Rot Fai captivated my girlfriend. I was in her good books and all was well. A few days later we journeyed 200km south to spend some time at Hua Hin, a coastal resort, where my girlfriend summarily fell ill with tonsillitis. Our resort was conveniently situated an hour south of Pak Thale, the world famous salt-pan wader hotspot that is also the winter hangout for a tiny handful of one of the world’s rarest and most enigmatic birds – the Spoon-billed Sandpiper. So, for two mornings while my beloved lay stricken in bed, I took a taxi to this wader paradise and revelled at the sight of hundreds of Marsh Sandpipers, Spotted Redshanks, Red-necked Stints and good numbers of other waders, like Pacific Golden Plovers and Terek Sandpipers. Despite finding a couple of site scarcities: a Red-necked Phalarope and an Avocet, I could not find a ‘Spoonie’, largely due to having no telescope. Leaving Thailand without seeing one was not an option, so I needed to call in the big guns. Enter Phil Round, Thailand’s top lister, rediscoverer of the once thought extinct Gurney’s Pitta and all-round hot birder. I convinced my girlfriend that we should leave Hua Hin that morning, ahead of schedule, and on the way back to Bangkok meet Phil at Pak Thale, twitch the Spoonies and arrive back in Bangkok for lunch. Well 12 hours, five Spoonies, a Black-faced Spoonbill and countless other ticks later we finally arrived into traffic-stacked Bangkok. It was nightfall and I was in the biggest doghouse known to man! For the remainder of my holiday I had to deny any interest in birds in order to preserve the peace. I did manage to sneak a quick visit to Bang Poo just outside Bangkok. It had a seaside promenade not dissimilar to Brighton where the locals gathered to feed the thousands of braying Brown-headed Gulls on scraps of noodles and prawns. During the short time I was allowed out I found six Black-headed Gulls in their midst and an overflying Osprey, but no Pallas’ Gull – an impressive gull occasionally found there. I thoroughly enjoyed my Bangkok holiday and could have written several pages about the birding to be had. But first, I better start working on my girlfriend to convert her into a birder!