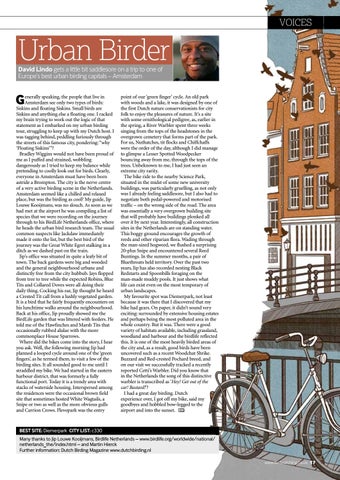 enerally speaking, the people that live in Amsterdam see only two types of birds: Siskins and floating Siskins. Small birds are Siskins and anything else a floating one. I racked my brain trying to work out the logic of that statement as I embarked on my urban birding tour, struggling to keep up with my Dutch host. I was tagging behind, peddling furiously through the streets of this famous city, pondering: “why ‘Floating Siskins’”? Bradley Wiggins would not have been proud of me as I puffed and strained, wobbling dangerously as I tried to keep my balance while pretending to coolly look out for birds. Clearly, everyone in Amsterdam must have been born astride a Brompton. The city is the nerve centre of a very active birding scene in the Netherlands. Amsterdam seemed like a chilled and relaxed place, but was the birding as cool? My guide, Jip Louwe Kooijmans, was no slouch. As soon as we had met at the airport he was compiling a list of species that we were recording on the journey through to his BirdLife Netherlands office, where he heads the urban bird research team. The usual common suspects like Jackdaw immediately made it onto the list, but the best bird of the journey was the Great White Egret stalking in a ditch as we dashed past on the train. Jip’s office was situated in quite a leafy bit of town. The back gardens were big and wooded and the general neighbourhood urbane and distinctly free from the city hubbub. Jays flopped from tree to tree while the expected Robins, Blue Tits and Collared Doves were all doing their daily thing. Cocking his ear, Jip thought he heard a Crested Tit call from a lushly vegetated garden. It is a bird that he fairly frequently encounters on his lunchtime walks around the neighbourhood. Back at his office, Jip proudly showed me the BirdLife garden that was littered with feeders. He told me of the Hawfinches and Marsh Tits that occasionally rubbed alulae with the more commonplace House Sparrows. Where did the bikes come into the story, I hear you ask. Well, the following morning Jip had planned a looped cycle around one of the ‘green fingers’, as he termed them, to visit a few of the birding sites. It all sounded good to me until I straddled my bike. We had started in the eastern harbour district, that was formerly a fully functional port. Today it is a trendy area with stacks of waterside housing. Interspersed among the residences were the occasional brown field site that sometimes hosted White Wagtails, a Snipe or two as well as the more obvious gulls and Carrion Crows. Flevopark was the entry

point of our ‘green finger’ cycle. An old park with woods and a lake, it was designed by one of the first Dutch nature conservationists for city folk to enjoy the pleasures of nature. It’s a site with some ornithological pedigree, as, earlier in the spring, a River Warbler spent three weeks singing from the tops of the headstones in the overgrown cemetery that forms part of the park. For us, Nuthatches, tit flocks and Chiffchaffs were the order of the day, although I did manage to glimpse a Lesser Spotted Woodpecker bouncing away from me, through the tops of the trees. Unbeknown to me, I had just seen an extreme city rarity. The bike ride to the nearby Science Park, situated in the midst of some new university buildings, was particularly gruelling, as not only was I already feeling saddlesore, but I also had to negotiate both pedal-powered and motorised traffic – on the wrong side of the road. The area was essentially a very overgrown building site that will probably have buildings plonked all over it by next year. Interestingly, all construction sites in the Netherlands are on standing water. This boggy ground encourages the growth of reeds and other riparian flora. Wading through the man-sized hogweed, we flushed a surprising 20-plus Snipe and encountered several Reed Buntings. In the summer months, a pair of Bluethroats held territory. Over the past two years, Jip has also recorded nesting Black Redstarts and Spoonbills foraging on the man-made muddy pools. It just shows what life can exist even on the most temporary of urban landscapes. My favourite spot was Diemerpark, not least because it was there that I discovered that my bike had gears. On paper, it didn’t sound very exciting: surrounded by extensive housing estates and perhaps being the most polluted area in the whole country. But it was. There were a good variety of habitats available, including grassland, woodland and harbour and the birdlife reflected this. It is one of the most heavily birded areas of the city and, as a result, good birds have been uncovered such as a recent Woodchat Shrike. Buzzard and Red-crested Pochard breed, and on our visit we successfully tracked a recently reported Cetti’s Warbler. Did you know that in the Netherlands the song of this distinctive warbler is transcribed as ‘Hey! Get out of the car! Bastard!’? I had a great day birding. Dutch experience over, I got off my bike, said my goodbyes and hobbled bow-legged to the airport and into the sunset.