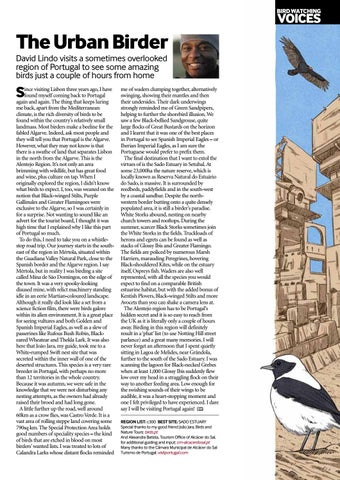 ince visiting Lisbon three years ago, I have found myself coming back to Portugal again and again. The thing that keeps luring me back, apart from the Mediterranean climate, is the rich diversity of birds to be found within the country’s relatively small landmass. Most birders make a beeline for the fabled Algarve. Indeed, ask most people and they will tell you that Portugal is the Algarve. However, what they may not know is that there is a swathe of land that separates Lisbon in the north from the Algarve. This is the Alentejo Region. It’s not only an area brimming with wildlife, but has great food and wine, plus culture on tap. When I originally explored the region, I didn’t know what birds to expect. I, too, was weaned on the notion that Black-winged Stilts, Purple Gallinules and Greater Flamingoes were exclusive to the Algarve, so I was certainly in for a surprise. Not wanting to sound like an advert for the tourist board, I thought it was high time that I explained why I like this part of Portugal so much. To do this, I need to take you on a whistlestop road trip. Our journey starts in the southeast of the region in Mértola, situated within the Guadiana Valley Natural Park, close to the Spanish border and the Algarve region. I say Mértola, but in reality I was birding a site called Mina de São Domingos, on the edge of the town. It was a very spooky-looking disused mine, with relict machinery standing idle in an eerie Martian-coloured landscape. Although it really did look like a set from a science fiction film, there were birds galore within its alien environment. It is a great place for seeing vultures and both Golden and Spanish Imperial Eagles, as well as a slew of passerines like Rufous Bush Robin, Blackeared Wheatear and Thekla Lark. It was also here that João Jara, my guide, took me to a White-rumped Swift nest site that was secreted within the inner wall of one of the deserted structures. This species is a very rare breeder in Portugal, with perhaps no more than 12 territories in the whole country. Because it was autumn, we were safe in the knowledge that we were not disturbing any nesting attempts, as the owners had already raised their brood and had long gone. A little further up the road, well around 60km as a crow flies, was Castro Verde. It is a vast area of rolling steppe land covering some 790sq km. The Special Protection Area holds good numbers of speciality species – the kind of birds that are etched in blood on most birders’ wanted lists. I was treated to lots of Calandra Larks whose distant flocks reminded

me of waders clumping together, alternatively swinging, showing their mantles and then their undersides. Their dark underwings strongly reminded me of Green Sandpipers, helping to further the shorebird illusion. We saw a few Black-bellied Sandgrouse, quite large flocks of Great Bustards on the horizon and I learnt that it was one of the best places in Portugal to see Spanish Imperial Eagles – or Iberian Imperial Eagles, as I am sure the Portuguese would prefer to prefix them. The final destination that I want to extol the virtues of is the Sado Estuary in Setubal. At some 23,000ha the nature reserve, which is locally known as Reserva Natural do Estuário do Sado, is massive. It is surrounded by reedbeds, paddyfields and in the south-west by a coastal sandbar. Despite the northwestern border butting onto a quite densely populated area, it is still a birder’s paradise. White Storks abound, nesting on nearby church towers and rooftops. During the summer, scarcer Black Storks sometimes join the White Storks in the fields. Truckloads of herons and egrets can be found as well as stacks of Glossy Ibis and Greater Flamingo. The fields are policed by numerous Marsh Harriers, marauding Peregrines, hovering Black-shouldered Kites, while on the estuary itself, Ospreys fish. Waders are also well represented, with all the species you would expect to find on a comparable British estuarine habitat, but with the added bonus of Kentish Plovers, Black-winged Stilts and more Avocets than you can shake a camera lens at. The Alentejo region has to be Portugal’s hidden secret and it is so easy to reach from the UK as it is literally only a couple of hours away. Birding in this region will definitely result in a ‘phat’ list (to use Notting Hill street parlance) and a great many memories. I will never forget an afternoon that I spent quietly sitting in Lagoa de Melides, near Grândola, further to the south of the Sado Estuary. I was scanning the lagoon for Black-necked Grebes when at least 1,000 Glossy Ibis suddenly flew low over my head in a straggling flock on their way to another feeding area. Low enough for the swishing sounds of their wings to be audible, it was a heart-stopping moment and one I felt privileged to have experienced. I dare say I will be visiting Portugal again! REGION LIST: c300  BEST SITE: SADO ESTUARY Special thanks to my good friend João Jara, Birds and Nature Tours: birds.pt And Alexandra Batista, Tourism Office of Alcácer do Sal, for additional guiding and input: cm-alcacerdosal.pt Many thanks to the Câmara Municipal de Alcácer do Sal Turismo de Portugal: visitportugal.com