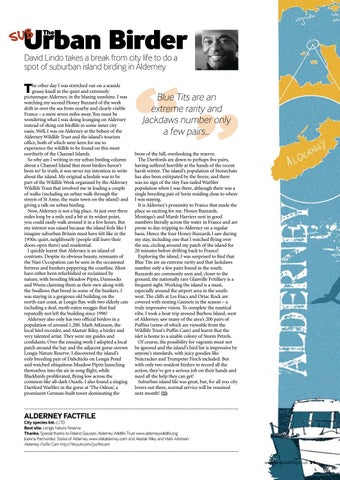 he other day I was stretched out on a seaside grassy knoll in the quiet and extremely picturesque Alderney, in the blazing sunshine. I was watching my second Honey Buzzard of the week drift in over the sea from nearby and clearly visible France – a mere seven miles away. You must be wondering what I was doing lounging on Alderney instead of eking out birdlife in some inner city oasis. Well, I was on Alderney at the behest of the Alderney Wildlife Trust and the island’s tourism office, both of which were keen for me to experience the wildlife to be found on this most northerly of the Channel Islands. So why am I writing in my urban birding column about a Channel Island that most birders haven’t been to? In truth, it was never my intention to write about the island. My original schedule was to be part of the Wildlife Week organised by the Alderney Wildlife Trust that involved me in leading a couple of walks (including an urban walk through the streets of St Anne, the main town on the island) and giving a talk on urban birding. Now, Alderney is not a big place. At just over three miles long by a mile and a bit at its widest point, you could easily walk around it in a few hours. But my interest was raised because the island feels like I imagine suburban Britain must have felt like in the 1950s: quiet, neighbourly (people still leave their doors open there) and residential. I quickly learnt that Alderney is an island of contrasts. Despite its obvious beauty, remnants of the Nazi Occupation can be seen in the occasional fortress and bunkers peppering the coastline. Most have either been refurbished or reclaimed by nature, with breeding Meadow Pipits, Dunnocks and Wrens claiming them as their own along with the Swallows that breed in some of the bunkers. I was staying in a gorgeous old building on the north-east coast, at Longis Bay, with two elderly cats including a deaf, moth-eaten moggie that had reputedly not left the building since 1996! Alderney also only has two official birders in a population of around 1,200. Mark Atkinson, the local bird recorder, and Alastair Riley, a birder and very talented artist. They were my guides and confidants. Over the ensuing week I adopted a local patch around the bay and the adjacent gorse-strewn Longis Nature Reserve. I discovered the island’s only breeding pair of Dabchicks on Longis Pond and watched ubiquitous Meadow Pipits launching themselves into the air in song flight, while Blackbirds proliferated, flying low across the common like all-dark Ouzels. I also found a singing Dartford Warbler in the gorse at ‘The Odeon’, a prominent German-built tower dominating the

Blue Tits are an extreme rarity and Jackdaws number only a few pairs... brow of the hill, overlooking the reserve. The Dartfords are down to perhaps five pairs, having suffered horribly at the hands of the recent harsh winter. The island’s population of Stonechats has also been extirpated by the freeze, and there was no sign of the tiny Fan-tailed Warbler population when I was there, although there was a single breeding pair of Serin residing close to where I was staying. It is Alderney’s proximity to France that made the place so exciting for me. Honey Buzzards, Montagu’s and Marsh Harriers nest in good numbers literally across the water in France and are prone to day-tripping to Alderney on a regular basis. Hence the four Honey Buzzards I saw during my stay, including one that I watched flying over the sea, circling around my patch of the island for 20 minutes before drifting back to France! Exploring the island, I was surprised to find that Blue Tits are an extreme rarity and that Jackdaws number only a few pairs found in the south. Buzzards are commonly seen and, closer to the ground, the nationally rare Glanville Fritillary is a frequent sight. Working the island is a must, especially around the airport area in the southwest. The cliffs at Les Etacs and Ortac Rock are covered with nesting Gannets in the season – a truly impressive vision. To complete the nautical vibe, I took a boat trip around Burhou Island, west of Alderney, saw many of the area’s 200 pairs of Puffins (some of which are viewable from the Wildlife Trust’s Puffin Cam) and learnt that the islet is home to a sizable colony of Storm Petrels. Of course, the possibility for vagrants must not be ignored and the island’s bird list is impressive by anyone’s standards, with juicy goodies like Nutcracker and Trumpeter Finch included. But with only two resident birders to record all the action, they’ve got a serious job on their hands and need all the help they can get! Suburban island life was great, but, for all you city lovers out there, normal service will be resumed next month!