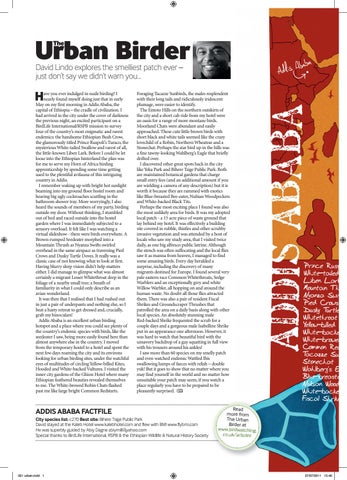 ave you ever indulged in nude birding? I nearly found myself doing just that in early May on my first morning in Addis Ababa, the capital of Ethiopia – the cradle of civilization. I had arrived in the city under the cover of darkness the previous night, an excited participant on a BirdLife International/RSPB mission to survey four of the country’s most enigmatic and rarest endemics: the handsome Ethiopian Bush Crow, the glamorously titled Prince Ruspoli’s Turaco, the mysterious White-tailed Swallow and rarest of all, the little-known Liben Lark. Before I could be let loose into the Ethiopian hinterland the plan was for me to serve my Horn of Africa birding apprenticeship by spending some time getting used to the plentiful avifauna of this intriguing country in Addis. I remember waking up with bright hot sunlight beaming into my ground floor hostel room and hearing big ugly cockroaches scuttling in the bathroom shower tray. More worryingly, I also heard the sounds of members of my party, birding outside my door. Without thinking, I stumbled out of bed and raced outside into the hostel garden where I was immediately subjected to a sensory overload. It felt like I was watching a virtual slideshow - there were birds everywhere. A Brown-rumped Seedeater morphed into a Mountain Thrush as Nyanza Swifts swirled overhead in the same airspace as traversing Pied Crows and Dusky Turtle Doves. It really was a classic case of not knowing what to look at first. Having blurry sleep vision didn’t help matters either. I did manage to glimpse what was almost certainly a migrant Lesser Whitethroat deep in the foliage of a nearby small tree; a breath of familiarity in what I could only describe as an avian wonderland. It was then that I realised that I had rushed out in just a pair of underpants and nothing else, so I beat a hasty retreat to get dressed and, crucially, grab my binoculars! Addis Ababa is an excellent urban birding hotspot and a place where you could see plenty of the country’s endemic species with birds, like the seedeater I saw, being more easily found here than almost anywhere else in the country. I moved from the temporary hostel to a hotel and spent the next few days roaming the city and its environs looking for urban birding sites, under the watchful eyes of multitudes of circling Yellow-billed Kites, Hooded and White-backed Vultures. I visited the inner city gardens of the Ghion Hotel where many Ethiopian feathered beauties revealed themselves to me. The White-browed Robin Chats flashed past me like large bright Common Redstarts.

Foraging Tacazze Sunbirds, the males resplendent with their long tails and ridiculously iridescent plumage, were easier to identify. The Entoto Hills on the northern outskirts of the city and a short cab ride from my hotel were an oasis for a range of more montane birds. Moorland Chats were abundant and easily approached. These cute little brown birds with short black and white tails seemed like the crazy lovechild of a Robin, Northern Wheatear and a Stonechat. Perhaps the star bird up in the hills was a fine tawny-looking Wahlberg’s Eagle that briefly drifted over. I discovered other great spots back in the city like Yeka Park and Bihere Tsige Public Park. Both are maintained botanical gardens that charge small entry fees (and an additional amount if you are wielding a camera of any description) but it is worth it because they are rammed with exotics like Blue-breasted Bee-eater, Nubian Woodpeckers and White-backed Black Tits. Perhaps the most exciting place I found was also the most unlikely area for birds. It was my adopted local patch - a 15 acre piece of waste ground that lay behind my hotel. It was effectively a building site covered in rubble, thistles and other scrubby invasive vegetation and was attended by a host of locals who saw my study area, that I visited twice daily, as one big alfresco public latrine. Although the stench was often suffocating and the local flies saw it as manna from heaven, I managed to find some amazing birds. Every day heralded a surprise, including the discovery of many migrants destined for Europe. I found several very pale eastern race Common Whitethroats, Sedge Warblers and an exceptionally grey and white Willow Warbler, all hopping on and around the human waste. No doubt all those flies attracted them. There was also a pair of resident Fiscal Shrikes and Groundscraper Thrushes that patrolled the area on a daily basis along with other local species. An absolutely stunning male Red-backed Shrike frequented the scrub for a couple days and a gorgeous male Isabelline Shrike put in an appearance one afternoon. However, it was hard to watch that beautiful bird with the unsavory backdrop of a guy squatting in full view with his trousers around his ankles! I saw more than 60 species on my smelly patch and even watched endemic Wattled Ibis swallowing lumps of faeces with relish – double yuk! But it goes to show that no matter where you may find yourself in the world and no matter how unsuitable your patch may seem, if you watch a place regularly you have to be prepared to be pleasantly surprised.