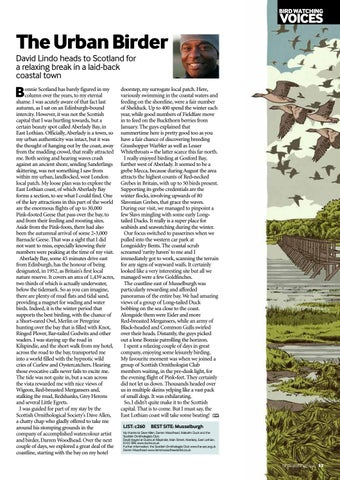 onnie Scotland has barely figured in my column over the years, to my eternal shame. I was acutely aware of that fact last autumn, as I sat on an Edinburgh-bound intercity. However, it was not the Scottish capital that I was hurtling towards, but a certain beauty spot called Aberlady Bay, in East Lothian. Officially, Aberlady is a town, so my urban authenticity was intact, but it was the thought of hanging out by the coast, away from the madding crowd, that really attracted me. Both seeing and hearing waves crash against an ancient shore, sending Sanderlings skittering, was not something I saw from within my urban, landlocked, west London local patch. My loose plan was to explore the East Lothian coast, of which Aberlady Bay forms a section, to see what I could find. One of the key attractions in this part of the world are the enormous flights of up to 30,000 Pink-footed Geese that pass over the bay, to and from their feeding and roosting sites. Aside from the Pink-foots, there had also been the autumnal arrival of some 2-3,000 Barnacle Geese. That was a sight that I did not want to miss, especially knowing their numbers were peaking at the time of my visit. Aberlady Bay, some 45 minutes drive east from Edinburgh, has the honour of being designated, in 1952, as Britain’s first local nature reserve. It covers an area of 1,439 acres, two thirds of which is actually underwater, below the tidemark. So as you can imagine, there are plenty of mud flats and tidal sand, providing a magnet for wading and water birds. Indeed, it is the winter period that supports the best birding, with the chance of a Short-eared Owl, Merlin or Peregrine hunting over the bay that is filled with Knot, Ringed Plover, Bar-tailed Godwits and other waders. I was staying up the road in Kilspindie, and the short walk from my hotel, across the road to the bay, transported me into a world filled with the hypnotic wild cries of Curlew and Oystercatchers. Hearing those evocative calls never fails to excite me. The tide was not quite in, but a scan across the vista rewarded me with nice views of Wigeon, Red-breasted Mergansers and, stalking the mud, Redshanks, Grey Herons and several Little Egrets. I was guided for part of my stay by the Scottish Ornithological Society’s Dave Allen, a chatty chap who gladly offered to take me around his stomping grounds in the company of accomplished watercolour artist and birder, Darren Woodhead. Over the next couple of days, we explored a great deal of the coastline, starting with the bay on my hotel

doorstep, my surrogate local patch. Here, variously swimming in the coastal waters and feeding on the shoreline, were a fair number of Shelduck. Up to 400 spend the winter each year, while good numbers of Fieldfare move in to feed on the Buckthorn berries from January. The guys explained that summertime here is pretty good too as you have a fair chance of discovering breeding Grasshopper Warbler as well as Lesser Whitethroats – the latter scarce this far north. I really enjoyed birding at Gosford Bay, further west of Aberlady. It seemed to be a grebe Mecca, because during August the area attracts the highest counts of Red-necked Grebes in Britain, with up to 50 birds present. Supporting its grebe credentials are the winter flocks, involving upwards of 80 Slavonian Grebes, that grace the waves. During our visit, we managed to pinpoint a few Slavs mingling with some early Longtailed Ducks. It really is a super place for seabirds and seawatching during the winter. Our focus switched to passerines when we pulled into the western car park at Longniddry Bents. The coastal scrub screamed ‘rarity haven’ to me and I immediately got to work, scanning the terrain for any signs of wayward waifs. It certainly looked like a very interesting site but all we managed were a few Goldfinches. The coastline east of Musselburgh was particularly rewarding and afforded panoramas of the entire bay. We had amazing views of a group of Long-tailed Duck bobbing on the sea close to the coast. Alongside them were Eider and more Red-breasted Mergansers, while an army of Black-headed and Common Gulls swirled over their heads. Distantly, the guys picked out a lone Bonxie patrolling the horizon. I spent a relaxing couple of days in great company, enjoying some leisurely birding. My favourite moment was when we joined a group of Scottish Ornithologist Club members waiting, in the pre-dusk light, for the evening flight of Pink-feet. They certainly did not let us down. Thousands headed over us in multiple skeins yelping like a vast pack of small dogs. It was exhilarating. So, I didn’t quite make it to the Scottish capital. That is to come. But I must say, the East Lothian coast will take some beating! List: c260