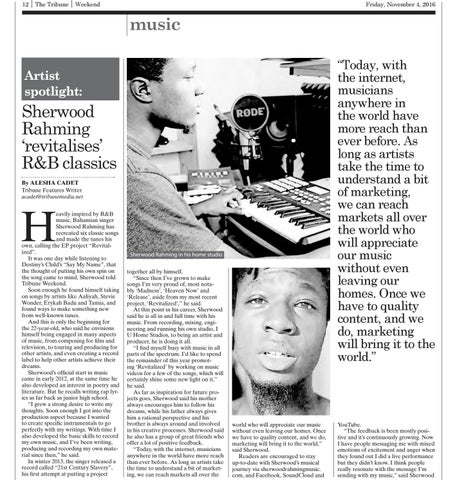 music “Today, with the internet, musicians anywhere in the world have more reach than ever before. As long as artists take the time to understand a bit of marketing, we can reach markets all over the world who will appreciate our music without even leaving our homes. Once we have to quality content, and we do, marketing will bring it to the world.”

eavily inspired by R&B music, Bahamian singer Sherwood Rahming has recreated six classic songs and made the tunes his own, calling the EP project “Revitalized”. It was one day while listening to Destiny’s Child’s “Say My Name”, that the thought of putting his own spin on the song came to mind, Sherwood told Tribune Weekend. Soon enough he found himself taking on songs by artists like Aaliyah, Stevie Wonder, Erykah Badu and Tamia, and found ways to make something new from well-known tunes. And this is only the beginning for the 22-year-old, who said he envisions himself being engaged in many aspects of music, from composing for film and television, to touring and producing for other artists, and even creating a record label to help other artists achieve their dreams. Sherwood’s official start in music came in early 2012, at the same time he also developed an interest in poetry and literature. But he recalls writing rap lyrics as far back as junior high school. “I grew a strong desire to write my thoughts. Soon enough I got into the production aspect because I wanted to create specific instrumentals to go perfectly with my writings. With time I also developed the basic skills to record my own music, and I’ve been writing, producing and recording my own material since then,” he said. In winter 2013, the singer released a record called “21st Century Slavery”, his first attempt at putting a project

Sherwood Rahming in his home studio together all by himself. “Since then I’ve grown to make songs I’m very proud of, most notably ‘Madness’, ‘Heaven Now’ and ‘Release’, aside from my most recent project, ‘Revitalized’,” he said. At this point in his career, Sherwood said he is all in and full time with his music. From recording, mixing, engineering and running his own studio, I U Home Studios, to being an artist and producer, he is doing it all. “I find myself busy with music in all parts of the spectrum. I’d like to spend the remainder of this year promoting ‘Revitalized’ by working on music videos for a few of the songs, which will certainly shine some new light on it,” he said. As far as inspiration for future projects goes, Sherwood said his mother always encourages him to follow his dreams, while his father always gives him a rational perspective and his brother is always around and involved in his creative processes. Sherwood said he also has a group of great friends who offer a lot of positive feedback. “Today, with the internet, musicians anywhere in the world have more reach than ever before. As long as artists take the time to understand a bit of marketing, we can reach markets all over the

world who will appreciate our music without even leaving our homes. Once we have to quality content, and we do, marketing will bring it to the world,” said Sherwood. Readers are encouraged to stay up-to-date with Sherwood’s musical journey via sherwoodrahmingmusic. com, and Facebook, SoundCloud and

YouTube. “The feedback is been mostly positive and it’s continuously growing. Now I have people messaging me with mixed emotions of excitement and anger when they found out I did a live performance but they didn’t know. I think people really resonate with the message I’m sending with my music,” said Sherwood