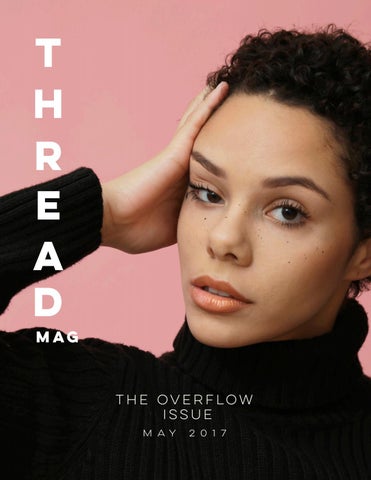 Authors Note Dear Reader, Thank you for supporting THREAD Mag! THREAD Mag was created with the intention of providing a space for artists to collaborate and grow with their fellow artists, innovators, and creators. In this first issue, our “test-run” of sorts, you will find a combination of pieces created by collaborative pairs as well as individual artists all inspired by the concept, “Overflow.” All work is original and created for this issue. As THREAD continues to grow and evolve, we hope to develop a stronger focus on the collaborative aspect of our project, cultivating more relationships with artists willing to work in partnership with fellow creators. We are so thankful for the overwhelming support and proud to present the incredible work of many talented and passionate artists. Special thanks to all those who donated their time and support to help us get this far. Yours truly, M&amp;E

The theme of our first issue is OVERFLOW. An overflow of talent, emotion, and passion. Created in a time where polar ice caps are melting into the sea, overflowing into cities and destroying homes. Created in a time when emotion is overflowing from people who feel marginalized, people of color, LGBTQ, women, and people with disabilities, while fear pours out of their eyes and floods the streets in protest. Created in a time when, more than ever, there must be an overflow of love to combat the systemic hate in our nation. We have asked our participating artists to create an OVERFLOW in any way they know how.

Congealed in a sloshing constancy Rivering-- catalogued as Nature’s boon / why does it always feel Like an unmending? Body bloody—being unmended Circumscribing as in blanketing irrevocably Like the cloaking of night when one, unbeknownst will not Live into the yellow The erasure that is / morning It is / like that. Bloody blanket/ unmended / unmended bloody As if blood equals wound equals fissure equals hole equals injured equals weak. Quickening, as Shakespeare uses it: “To enliven” / like in the milk mold of the waxen womb walls The body’s way of relaying: I have a tidal current and thus, nature, and thus, all that Reason Can include in its all-inclusivity Will never / by some firm-wielding will Of some / omnipresence / be stagnant Even pastoral stillness is tidal. Darling drip, criminal, miracle Color coming onto cotton like readied assault Second hand shame accompanies women’s deluge Does cyclical sacrifice translate to indignity? If pelvic flow, a woman’s wine, was taken not as Acrid / Acridity like bitter soil / But as / Evangelic If it wasn’t deemed inundation/ turbulent/ But blessing / What if / permission was given To bleed on everything / everything / He / needs / white/ unwhite/ everything she’s afraid to stain Overflow asking not for warranted apology / Overflow in red Kisses left on the earth’s face.

Items in compacted synthesis wherein individual parts Cannot be identified Compound Cathartic momentum is like emoting a crystallized compound just now permitting breakage Out like smoke through slits as thin as biblical oaths The brain’s ugly apparition / is / unwound Billowing out like pent up breath In the manic stuff of seizures/ in wintered nakedness after the summer Has surmounted and the heat in the ground is lifted like an unruly child—even the undetectable. Textbook definition immanence And when immanence moves exothermic that is when It peacocks itself as most alive in us when bodies release Volcanic impetus / hibernated reeling of poetry We The poetry/ the ardor /that divided humans Into haphazard rhythm with nature and breath Destined us plugged us into the ability to profoundly release to Purge/ is the small death the equivalent to salt and blood in an orgasm Malignant clouds that teeter on the unrest of the rain they house cleansed and bathed the same time they are pushed through our cells Forced through like trauma sweet release the afterbirth It is here that disquietude is found in the motion of soul, The wheeling of it, the breaking of the wheel of it, the discourse in the wheeling of it Over boiled epiphanies climb up themselves to find A skyscraping vantage at which to leak And they pour, oh, they pour Like the unwavering, abominable sensation of a phantom limb Forever lamenting the tangible flesh that has been lost The sensation persists it outcries It stains the consciousness like an uncoiled smog.

III. Lust Every intake of the salt on his skin Wilts the long, unerupted merchandise of safekept things Irreverence to Overtake/the name of suspicious will, is unarmed like a frenzied guard. Desire, the menacing jester of every court, diligent in his surmise That he is murderous and decadent, Brooding and pseudo-utopian, flails the games of his practice With sweet notes of ardor and siren calls/ trills like a dying star. And in his method, unable to rest, plays-- on, and on. A mutiny to the nerves of the masochistic kind What occurs is the physical manifestation of the letters written With cursive of symphonic amiability Cursive stylistic of impressionism like A lovers laugh when they unwind the stiff bind Of another’s volcanic grid points All it is is a climbing of axes, or mountain peaks, or laiden bends. Sacrificial impressionism: Medium; the pink-wetted entrails of the easily wounded places: Art in the precarious abstract that screams when it is fingered in a stringing And unstringing/ Rupture! in the gaping and

imploring caverns of itself. Lust reveals itself bespoken in between the ruled lines of a ribcage/page/indelicate Now as it’s endured an unerring coming, deflating, wither, suckle, toss, tense, lose, let. The private moment for a Grecian form. Legs sprawled apart are ruins falling depleted, into the jaws of the earth And crying “Take us back to where you mouthed, molded, us first Un-chisel us and turn our stone to river, stream With the will of our heat like a goblet for sacred melting. It… drools a web of warmed silk around our motion Guilds hips like artillery, chests like portals If all of This, wokenness, is an idol-given dread, a drop from grace: The tokens of lust are our only splendid leisure.

IV. Storm Stewed hailing in a space of continual barreling Its as if before the blow we forget about the intent The quiet wait like a stalking fiend The starved instinct of a fetish or of love of taking Unravels us in the form of Its abysmal mouth If an atmosphere was metaphoric And offered movement for chaos- Chaos: dancer, live wire, rabbid The birthplace of storms brutal as gods and spades Would claim well an arena above our heads. Powder-keg challenge until a warm front Stenches, wounds a mild haze. Placation is death here/ in this incessant rowing Blow refutes bustle like a mutinous roar A colosseum brawl in epic thicks and sheens/ tos and fros emerge from the feral instinct of it Curses, profanity in the form of hail/stabs in the guise of rain. I hope she comes and rapes the windows off the undeserving houses, who Regret they even gave permit to transparent glimpses On their hips and cheeks Dismiss their smooth skin among jagged incisions Relentlessly in oscillation between overflow and filling up/ again Bows and troughs I donâ&amp;#x20AC;&amp;#x2122;t know how she mighties like a Titan in the night.

Groves will start to bow into themselves fetal Sheâ&amp;#x20AC;&amp;#x2122;ll set you drifting in her livid hum Before you have clearance to fossil yourself into the sofa Scornful? Or needing? The by-product of too-stale waiting? I have no more stand to name her or her reason, (perhaps her catalyst) Than an eye intently watching her ferment but there is fury in the drool of it A disruption in the misleading comfort night like this is necessity Towns will ooze away through the spaces in her hands.

V. Construct crack the basin for indignation when the masonry does injustice to you? If you print it in blue With a cordial, concise, two-dimensionality Everything that is fretted and ached for Is reduced to pipes, compartments, chemicals So why not unscrew the pipes with your dirty fingernails Is that was all quasi-uplift is, anyway? Teaching the unscrewing of oneâ&amp;#x20AC;&amp;#x2122;s boisterous ebbs: Deploy all of the unforgiving torments onto the porcelain-precious receptacles Of our belonging to Stab and resist congealment so that youth deflates like the whipping-past seasons As they are pushed away by voices insisting for warmer, colder, tight, upheld, hoist I want to know if there is anything constant If constancy/ if circumferencing oneself in affirmation Is a validity at all/ she, he, they, the collective, swims And every particle of drip and drown/ of intake and exhaust, Expense of muscle- is a flick and thus, realignment of

the clay The bodies printed for artificial, capitalistic enterprises Are just the opposite of clay/ the cold, crippled contagion of gloss on reconstruction Negligence of the hatch Think: nymphic, cherrubish women Glide your eyes through the courses of blush and tempestuous avenues Museumed for centuries in the guarding loom of a frame This is a semblance of body in the divine sense Ripples/ spillage out into/ evoke essence of ripened divinity We sanction the liquid ownness into pressurized obscurity Put a padlock on the festering growth of a thing before It overtakes the entire vessel And the evocative shapes in the whispering frames Urge us to dwell with them further/ to taste the relish of/ overflow.

I have come to look at the foam on the tops of waves. The foam from breaking waves covers between three to four percent of the earthâ&amp;#x20AC;&amp;#x2122;s surface. This acreage is equal to the continent of North America. Knowing things like this keeps my mind at ease: How small bubbles are. My mother is in the house today. She is most likely sinking into the couch, drowning in Netflix, negotiating the weight of her eyelids, drinking water with bubbles edging up against the rim of her glass. On any shore, 8,000 waves break a day. I must have sat a long time on that beach. When I returned to my house my mother was allowing drifting darkness to spill into the empty rooms. The glow from the screen in my motherâ&amp;#x20AC;&amp;#x2122;s palms fills the window with a brimming light making the waning day look darker than it is. A teasing August rain that raises expectations it cannot fill begins dissolving bubble on the tops of waves. The memory of the day turns to dust moats floating in the air. Quietness booms against the walls, like close thunder in panic, until draining to less than a whisper. -Samantha Bruce

glass half empty I am not

My heart seems to Gush with the pulsating desire to explode from my chesttoo Big for its container of chambers, arteries and valves, too occupied with the Presence that is only mine. The size of two fists Stabbed Defiantly in the sky, it squeezes itself into knots with the hopes of Release. But moon and person and tear and smile Live Here; so. it pounds on. heavily. without relief. wishing, with held Breath, it could Open its gates and Flood itself over. - Elizabeth Katz

Once again, we are so appreciative of the support weâ&amp;#x20AC;&amp;#x2122;ve received. Please continue to our website to view our Overflow Featured Films. http://www.thethreadmag.com New York City Artists, Writers, and Web Designers, visit our website to join our Thread Mag team.

The Thread Mag is a collaborative, multi-media art magazine based in New York City. For more information, visit www.thethreadmag.com. 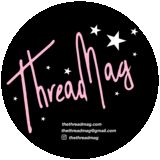