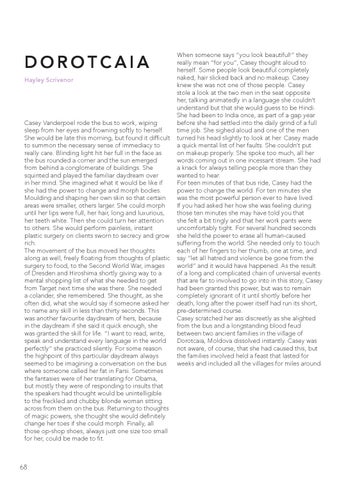 Casey Vanderpoel rode the bus to work, wiping sleep from her eyes and frowning softly to herself. She would be late this morning, but found it difficult to summon the necessary sense of immediacy to really care. Blinding light hit her full in the face as the bus rounded a corner and the sun emerged from behind a conglomerate of buildings. She squinted and played the familiar daydream over in her mind. She imagined what it would be like if she had the power to change and morph bodies. Moulding and shaping her own skin so that certain areas were smaller, others larger. She could morph until her lips were full, her hair, long and luxurious, her teeth white. Then she could turn her attention to others. She would perform painless, instant plastic surgery on clients sworn to secrecy and grow rich. The movement of the bus moved her thoughts along as well, freely floating from thoughts of plastic surgery to food, to the Second World War, images of Dresden and Hiroshima shortly giving way to a mental shopping list of what she needed to get from Target next time she was there. She needed a colander, she remembered. She thought, as she often did, what she would say if someone asked her to name any skill in less than thirty seconds. This was another favourite daydream of hers, because in the daydream if she said it quick enough, she was granted the skill for life. “I want to read, write, speak and understand every language in the world perfectly” she practiced silently. For some reason the highpoint of this particular daydream always seemed to be imagining a conversation on the bus where someone called her fat in Farsi. Sometimes the fantasies were of her translating for Obama, but mostly they were of responding to insults that the speakers had thought would be unintelligible to the freckled and chubby blonde woman sitting across from them on the bus. Returning to thoughts of magic powers, she thought she would definitely change her toes if she could morph. Finally, all those op-shop shoes, always just one size too small for her, could be made to fit.

When someone says “you look beautiful!” they really mean “for you”, Casey thought aloud to herself. Some people look beautiful completely naked, hair slicked back and no makeup. Casey knew she was not one of those people. Casey stole a look at the two men in the seat opposite her, talking animatedly in a language she couldn’t understand but that she would guess to be Hindi. She had been to India once, as part of a gap year before she had settled into the daily grind of a full time job. She sighed aloud and one of the men turned his head slightly to look at her. Casey made a quick mental list of her faults. She couldn’t put on makeup properly. She spoke too much, all her words coming out in one incessant stream. She had a knack for always telling people more than they wanted to hear. For teen minutes of that bus ride, Casey had the power to change the world. For ten minutes she was the most powerful person ever to have lived. If you had asked her how she was feeling during those ten minutes she may have told you that she felt a bit tingly and that her work pants were uncomfortably tight. For several hundred seconds she held the power to erase all human-caused suffering from the world. She needed only to touch each of her fingers to her thumb, one at time, and say “let all hatred and violence be gone from the world” and it would have happened. As the result of a long and complicated chain of universal events that are far to involved to go into in this story, Casey had been granted this power, but was to remain completely ignorant of it until shortly before her death, long after the power itself had run its short, pre-determined course. Casey scratched her ass discreetly as she alighted from the bus and a longstanding blood feud between two ancient families in the village of Dorotcaia, Moldova dissolved instantly. Casey was not aware, of course, that she had caused this, but the families involved held a feast that lasted for weeks and included all the villages for miles around. 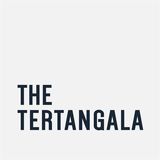 Get excited for the first tertangala for 2015. Filled with a plethora of articles featuring all that is weird and wonderful about Wollongong...

Get excited for the first tertangala for 2015. Filled with a plethora of articles featuring all that is weird and wonderful about Wollongong...