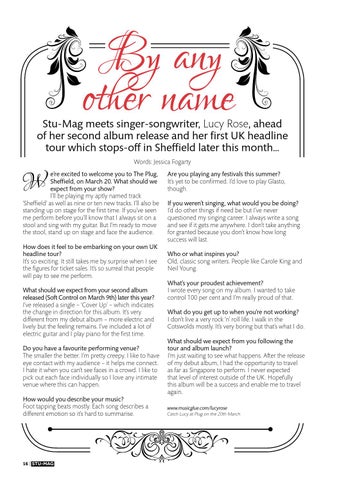 Stu-Mag meets singer-songwriter, Lucy Rose, ahead of her second album release and her first UK headline tour which stops-off in Sheffield later this month… Words: Jessica Fogarty e’re excited to welcome you to The Plug, Sheffield, on March 20. What should we expect from your show? I’ll be playing my aptly named track ‘Sheffield’ as well as nine or ten new tracks. I’ll also be standing up on stage for the first time. If you’ve seen me perform before you’ll know that I always sit on a stool and sing with my guitar. But I’m ready to move the stool, stand up on stage and face the audience. How does it feel to be embarking on your own UK headline tour? It’s so exciting. It still takes me by surprise when I see the figures for ticket sales. It’s so surreal that people will pay to see me perform. What should we expect from your second album released (Soft Control on March 9th) later this year? I’ve released a single – ‘Cover Up’ – which indicates the change in direction for this album. It’s very different from my debut album – more electric and lively but the feeling remains. I’ve included a lot of electric guitar and I play piano for the first time. Do you have a favourite performing venue? The smaller the better. I’m pretty creepy. I like to have eye contact with my audience – it helps me connect. I hate it when you can’t see faces in a crowd. I like to pick out each face individually so I love any intimate venue where this can happen. How would you describe your music? Foot tapping beats mostly. Each song describes a different emotion so it’s hard to summarise.

Are you playing any festivals this summer? It’s yet to be confirmed. I’d love to play Glasto, though. If you weren’t singing, what would you be doing? I’d do other things if need be but I’ve never questioned my singing career. I always write a song and see if it gets me anywhere. I don’t take anything for granted because you don’t know how long success will last. Who or what inspires you? Old, classic song writers. People like Carole King and Neil Young. What’s your proudest achievement? I wrote every song on my album. I wanted to take control 100 per cent and I’m really proud of that. What do you get up to when you’re not working? I don’t live a very rock ‘n’ roll life. I walk in the Cotswolds mostly. It’s very boring but that’s what I do. What should we expect from you following the tour and album launch? I’m just waiting to see what happens. After the release of my debut album, I had the opportunity to travel as far as Singapore to perform. I never expected that level of interest outside of the UK. Hopefully this album will be a success and enable me to travel again. www.musicglue.com/lucyrose Catch Lucy at Plug on the 20th March 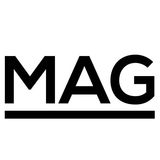