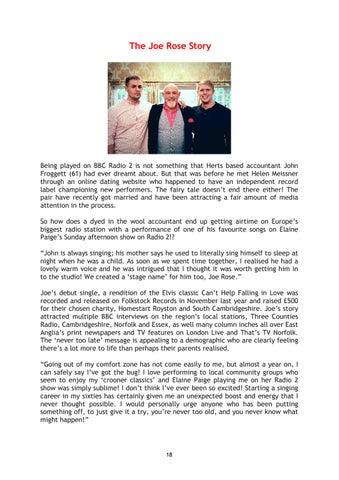 Being played on BBC Radio 2 is not something that Herts based accountant John Froggett (61) had ever dreamt about. But that was before he met Helen Meissner through an online dating website who happened to have an independent record label championing new performers. The fairy tale doesn’t end there either! The pair have recently got married and have been attracting a fair amount of media attention in the process. So how does a dyed in the wool accountant end up getting airtime on Europe’s biggest radio station with a performance of one of his favourite songs on Elaine Paige’s Sunday afternoon show on Radio 2!? “John is always singing; his mother says he used to literally sing himself to sleep at night when he was a child. As soon as we spent time together, I realised he had a lovely warm voice and he was intrigued that I thought it was worth getting him in to the studio! We created a ‘stage name’ for him too, Joe Rose.” Joe’s debut single, a rendition of the Elvis classic Can’t Help Falling in Love was recorded and released on Folkstock Records in November last year and raised £500 for their chosen charity, Homestart Royston and South Cambridgeshire. Joe’s story attracted multiple BBC interviews on the region’s local stations, Three Counties Radio, Cambridgeshire, Norfolk and Essex, as well many column inches all over East Anglia’s print newspapers and TV features on London Live and That’s TV Norfolk. The ‘never too late’ message is appealing to a demographic who are clearly feeling there’s a lot more to life than perhaps their parents realised. “Going out of my comfort zone has not come easily to me, but almost a year on, I can safely say I’ve got the bug! I love performing to local community groups who seem to enjoy my ‘crooner classics’ and Elaine Paige playing me on her Radio 2 show was simply sublime! I don’t think I’ve ever been so excited! Starting a singing career in my sixties has certainly given me an unexpected boost and energy that I never thought possible. I would personally urge anyone who has been putting something off, to just give it a try, you’re never too old, and you never know what might happen!” Out now the October Issue of The Sticks digital magazine The number one what’s on magazine across Herts, Beds & Bucks with over 16,000 reade...

Out now the October Issue of The Sticks digital magazine The number one what’s on magazine across Herts, Beds & Bucks with over 16,000 reade...