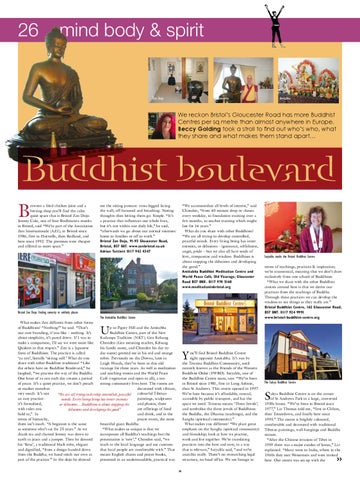 We reckon Bristol’s Gloucester Road has more Buddhist Centres per sq metre than almost anywhere in Europe. Beccy Golding took a stroll to find out who’s who, what they share and what makes them stand apart…

etween a fried chicken joint and a betting shop you’ll find the calm quiet space that is Bristol Zen Dojo. Jeremy Cole, one of four Bodhisattra monks in Bristol, said “We’re part of the Association Zen Internationale (AZI), in Bristol since 1986, first in Hotwells, then Redland, and here since 1992. The premises were cheaper and offered us more space.”

me the sitting posture: cross-legged facing the wall, off-focussed and breathing. Noting thoughts then letting them go. Simple. “It’s a practice that influences our whole lives, but it’s not within our daily life,” he said, “afterwards we go about our normal routines: home to families or off to work.” Bristol Zen Dojo, 91-93 Gloucester Road, Bristol, BS7 8AT. www.zenbristol.co.uk Adrian Tuttiett 0117 942 4347

“We accommodate all levels of interest,” said Chonden, “from 40-minute drop-in classes every weekday, to foundation training over a few months, to teacher training which might last for 14 years.” What do you share with other Buddhists? “We are all trying to develop controlled, peaceful minds. Every living being has inner enemies, or delusions – ignorance, selfishness, anger, pride – but we also all have seeds of love, compassion and wisdom. Buddhism is about stopping the delusions and developing the good.” Amitabha Buddhist Meditation Centre and World Peace Café, Old Vicarage, Gloucester Road BS7 8NX. 0117 974 5160 www.meditationinbristol.org

Bristol Zen Dojo: finding serenity in unlikely places The Amitabha Buddhist Centre What makes Zen different from other forms of Buddhism? “Nothing!” he said. “That’s p to Pigsty Hill and the Amitabha our core branding, if you like – nothing. It’s Buddhist Centre, part of the New about simplicity, it’s pared down. If I was to Kadampa Tradition (NKT). Gen Kelsang make a comparison, I’d say we were more like Chonden (Gen meaning teacher, Kelsang Quakers in that respect.” Zen is a Japanese his family name, and Chonden his day-toform of Buddhism. The practice is called day name) greeted me in his red and orange ‘za-zen’, literally ‘sitting still.’ What do you robes. Previously on the Downs, later in share with other Buddhist traditions? “Like Leigh Woods, they’ve been in this old the others here on Buddhist Boulevard,” he vicarage for three years. As well as meditation laughed, “we practise the way of the Buddha. and teaching rooms and the World Peace One hour of za-zen each day creates a period Café (vegetarian and open to all), a tenof peace. It’s a quiet practice, we don’t preach strong community lives here. The rooms are or market ourselves decorated with vibrant, very much. It’s not colourful Tibetan “We are all trying to develop controlled, peaceful an easy practice: paintings, sculptures minds. Every living being has inner enemies it’s formalised, and photos, there or delusions… Buddhism is about stopping the with rules you are offerings of food delusions and developing the good” hold to,”. In and drink, and in the terms of hierarchy, prayer room, the most there isn’t much. “A beginner is the same beautiful giant Buddha. as someone who’s sat for 25 years.” As we “What makes us unique is that we drank tea and chatted Jeremy was down to incorporate all Buddha’s teachings but the earth in jeans and a jumper. Then he donned presentation is ‘new’,” Chonden said, “we his ‘Kesa’, a traditional black robe, elegant teach in the local language and use customs and dignified, “from a design handed down that local people are comfortable with.” That from the Buddha; we hand stitch our own as means English chants and prayer books, part of the practice.” In the dojo he showed presented in an understandable, practical way.

Satyalila inside the Bristol Buddhist Centre terms of teachings, practices &amp; inspiration; we’re ecumenical, meaning that we don’t draw exclusively from one school of Buddhism. “What we share with the other Buddhist centres around here is that we derive our practices from the teachings of Buddha. Through these practices we can develop the wisdom to see things as they really are.” Bristol Buddhist Centre, 162 Gloucester Road, BS7 8NT. 0117 924 9991 www.bristol-buddhist-centre.org

ou’ll find Bristol Buddhist Centre right opposite Amitabha. It’s run by the Triratna Buddhist Community, until recently known as the Friends of the Western Buddhist Order (FWBO). Satyalila, one of the Buddhist Centre team, says: “We’ve been in Bristol since 1981, first in Long Ashton, then St Andrews. This centre opened in 1997. We’re here because it’s affordable, central, accessible by public transport, and has the space we need. Triratna means ‘Three Jewels’, and symbolise the three jewels of Buddhism: the Buddha, the Dharma (teachings), and the Sangha (spiritual community).” What makes you different? “We place great emphasis on the Sangha (spiritual community) and friendship; look at how we practise, work and live together. We’re translating practices into the here and now, in a way that is relevant,” Satyalila said, “and we’re anarchic really. There’s no overarching legal structure, no head office. We see lineage in 26

akya Buddhist Centre is on the corner of St Andrews Park in a large, converted 1930s house. “We’ve been in Bristol since 1977,” Liz Thomas told me, “first in Clifton, then Totterdown, and finally here since 1995.” The centre is brightly coloured, comfortable and decorated with traditional Tibetan paintings, wall-hangings and Buddha statues. “After the Chinese invasion of Tibet in 1959 there was a major exodus of lamas,” Liz explained. “Many went to India, where in the 1960s they met Westerners and were invited ›› here. Our centre was set up with the 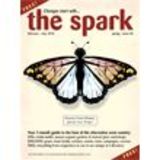