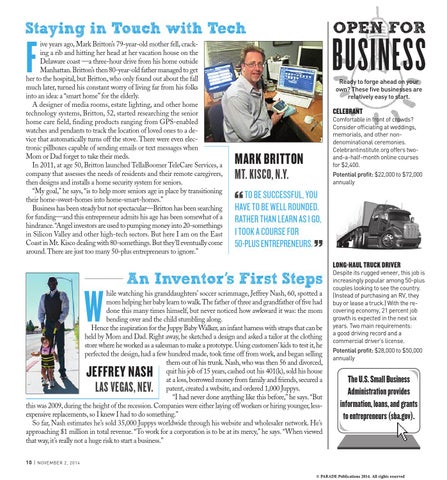 Ready to forge ahead on your own? These five businesses are relatively easy to start.

Comfortable in front of crowds? Consider officiating at weddings, memorials, and other nondenominational ceremonies. Celebrantinstitute.org offers twoand-a-half-month online courses for $2,400.

you “haveTotobebesuccessful, well rounded. Rather than learn as I go, I took a course for 50-plus entrepreneurs.

ive years ago, Mark Britton’s 79-year-old mother fell, cracking a rib and hitting her head at her vacation house on the Delaware coast —a three-hour drive from his home outside Manhattan. Britton’s then 80-year-old father managed to get her to the hospital, but Britton, who only found out about the fall much later, turned his constant worry of living far from his folks into an idea: a “smart home” for the elderly. A designer of media rooms, estate lighting, and other home technology systems, Britton, 52, started researching the senior home care field, finding products ranging from GPS-enabled watches and pendants to track the location of loved ones to a device that automatically turns off the stove. There were even electronic pillboxes capable of sending emails or text messages when Mom or Dad forget to take their meds. In 2011, at age 50, Britton launched TellaBoomer TeleCare Services, a company that assesses the needs of residents and their remote caregivers, then designs and installs a home security system for seniors. “My goal,” he says, “is to help more seniors age in place by transitioning their home-sweet-homes into home-smart-homes.” Business has been steady but not spectacular—Britton has been searching for funding—and this entrepreneur admits his age has been somewhat of a hindrance. “Angel investors are used to pumping money into 20-somethings in Silicon Valley and other high-tech sectors. But here I am on the East Coast in Mt. Kisco dealing with 80-somethings. But they’ll eventually come around. There are just too many 50-plus entrepreneurs to ignore.”

hile watching his granddaughters’ soccer scrimmage, Jeffrey Nash, 60, spotted a mom helping her baby learn to walk. The father of three and grandfather of five had done this many times himself, but never noticed how awkward it was: the mom bending over and the child stumbling along. Hence the inspiration for the Juppy Baby Walker, an infant harness with straps that can be held by Mom and Dad. Right away, he sketched a design and asked a tailor at the clothing store where he worked as a salesman to make a prototype. Using customers’ kids to test it, he perfected the design, had a few hundred made, took time off from work, and began selling them out of his trunk. Nash, who was then 56 and divorced, quit his job of 15 years, cashed out his 401(k), sold his house at a loss, borrowed money from family and friends, secured a patent, created a website, and ordered 1,000 Juppys. “I had never done anything like this before,” he says. “But this was 2009, during the height of the recession. Companies were either laying off workers or hiring younger, lessexpensive replacements, so I knew I had to do something.” So far, Nash estimates he’s sold 35,000 Juppys worldwide through his website and wholesaler network. He’s approaching $1 million in total revenue. “To work for a corporation is to be at its mercy,” he says. “When viewed that way, it’s really not a huge risk to start a business.”

Despite its rugged veneer, this job is increasingly popular among 50-plus couples looking to see the country. (Instead of purchasing an RV, they buy or lease a truck.) With the recovering economy, 21 percent job growth is expected in the next six years. Two main requirements: a good driving record and a commercial driver’s license. Potential profit: $28,000 to $50,000 annually 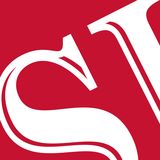