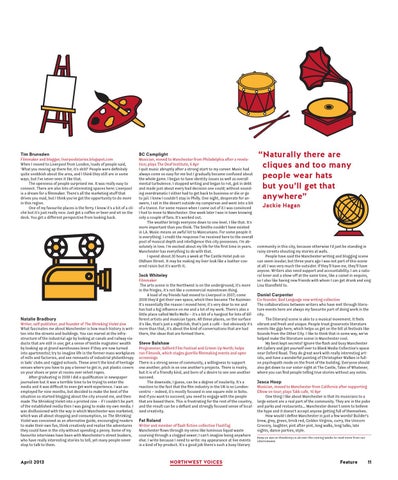 Tim Brunsden Filmmaker and blogger, liverpoolstories.blogspot.com When I moved to Liverpool from London, loads of people said, ‘What you moving up there for, it’s shit?’ People were definitely quite snobbish about the area, and I think they still are in some ways, but I’ve never seen it like that. The openness of people surprised me. It was really easy to connect. There are also lots of interesting spaces here: Liverpool is a dream for a filmmaker. There’s all the marketing stuff that drives you mad, but I think you’ve got the opportunity to do more in this region. One of my favourite places is the ferry. I know it’s a bit of a cliché but it’s just really nice. Just get a coffee or beer and sit on the deck. You get a different perspective from looking back.

Natalie Bradbury Writer, self-publisher, and founder of The Shrieking Violet zine What fascinates me about Manchester is how much history is written into the streets and buildings. You can marvel at the infrastructure of the industrial age by looking at canals and railway viaducts that are still in use; get a sense of textile magnates’ wealth by looking up at grand warehouses (even if they are now turned into apartments); try to imagine life in the former mass workplaces of mills and factories, and see remnants of industrial philanthropy in lads’ clubs and ragged schools. These aren’t the kind of heritage venues where you have to pay a tenner to get in, put plastic covers on your shoes or peer at rooms over velvet ropes. After graduating in 2008 I did a qualification in newspaper journalism but it was a terrible time to be trying to enter the media and it was difficult to even get work experience. I was unemployed for nine months, but decided to make the best of the situation so started blogging about the city around me, and then made The Shrieking Violet into a printed zine – if I couldn’t be part of the established media then I was going to make my own media. I was disillusioned with the way in which Manchester was marketed, which was all about shopping and consumption, so The Shrieking Violet was conceived as an alternative guide, encouraging readers to make their own fun, think creatively and realise the adventures they could have in the city without spending a penny. Some of my favourite interviews have been with Manchester’s street buskers, who have really interesting stories to tell, yet many people never stop to talk to them.

BC Camplight Musician, moved to Manchester from Philadelphia after a revelation; plays The Deaf Institute, 6 Apr I quit music abruptly after a strong start to my career. Music had always come so easy for me but I gradually became confused about the whole game. I began to have identity issues as well as overall mental turbulence. I stopped writing and began to rot, got in debt and made just about every bad decision one could; without sounding overdramatic I either had to get back to business or die or go to jail. I knew I couldn’t stay in Philly. One night, desperate for answers, I sat in the desert outside my campervan and went into a bit of a trance. For some reason when I came out of it I was convinced I had to move to Manchester. One week later I was in town knowing only a couple of fans. It’s worked out. The weather brings everyone down to one level. I like that. It’s more important than you think. The Smiths couldn’t have existed in LA. Music means an awful lot to Mancunians. For some people it is everything. I credit the response I’ve received here to the overall pool of musical depth and intelligence this city possesses. I’m absolutely in love. I’m excited about my life for the first time in years. Manchester has everything to do with that. I spend about 30 hours a week at The Castle Hotel pub on Oldham Street. It may be making my liver look like a leather-covered raisin but it’s worth it. Jack Whiteley Filmmaker The arts scene in the Northwest is on the underground, it’s more in the fringes, it’s not like a commercial mainstream thing. A load of my friends had moved to Liverpool in 2007; come 2008 they’d got their own space, which then became The Kazimier. It’s essentially the reason I moved here; it’s very dear to me and has had a big influence on me and a lot of my work. There’s also a little place called Mello Mello – it’s a bit of a hangout for lots of different artists and musician types. All these places, on the surface it’s like, that’s just a nightclub, that’s just a café – but obviously it’s more than that, it’s about the kind of conversations that are had there, the ideas that are formed there. Steve Balshaw Programmer, Salford Film Festival and Grimm Up North; helps run Filmonik, which stages guerilla filmmaking events and open screenings There is a strong sense of community, a willingness to support one another, pitch in on one another’s projects. There is rivalry, but it is of a friendly kind, and born of a desire to see one another succeed. The downside, I guess, can be a degree of insularity. It’s a reaction to the fact that the film industry in the UK is so Londoncentric – indeed, it’s mostly focused in one square mile in Soho. And if you want to succeed, you need to engage with the people that are based there. This is frustrating for the rest of the country, and the result can be a defiant and strongly focused sense of localised creativity. Fat Roland Writer and member of flash fiction collective FlashTag Manchester flows through my veins like luminous liquid waste coursing through a clogged sewer; I can’t imagine being anywhere else. I write because I need to write: my appearance at live events is a kind of by-product. It’s a good job there’s such a busy literary

community in this city, because otherwise I’d just be standing in rainy streets shouting my stories at walls. People have said the Manchester writing and blogging scene can seem insular, but three years ago I was not part of this scene at all: I was very much the outsider. If they’ll have me, they’ll have anyone. Writers also need support and accountability. I am a natural loner and a show-off at the same time, like a camel in sequins, so I also like having new friends with whom I can get drunk and sing Lisa Stansfield to. Daniel Carpenter Co-founder, Bad Language new writing collective The collaborations between writers who have met through literature events here are always my favourite part of doing work in the city. The [literary] scene is akin to a musical movement. It feels vibrant and fresh and unique. People treat grassroots literature events like gigs here, which helps us get on the bill at festivals like Sounds from the Other City. I like to think that in some way, we’ve helped make the literature scene in Manchester cool. My best kept secrets? Ignore the flash and busy Manchester Art Gallery and get yourself over to Blank Media Collective’s space near Oxford Road. They do great work with really interesting artists, and have a wonderful painting of Christopher Walken in fullon psychopath mode on the front of the building. Everyone should also get down to our sister night at The Castle, Tales of Whatever, where you can find people telling true stories without any notes. Jesca Hoop Musician, moved to Manchester from California after supporting Elbow on tour; plays Takk cafe, 10 Apr One thing I like about Manchester is that its musicians to a large extent are a real part of the community. They are in the pubs and parks and restaurants... Manchester doesn’t seem to believe the hype and it doesn’t accept anyone getting full of themselves. How would I define Manchester in just a few words? Builder’s brew, grey, green, brick red, Golden Virginia, curry, the Unicorn Grocery, laughter, pint after pint, long walks, long talks, late nights, dance parties, style. Keep an eye on theskinny.co.uk over the coming weeks to read more from our interviewees 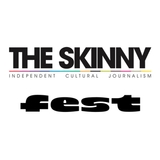 The Skinny Northwest is a new entertainment and listings magazine for Manchester and Liverpool.

The Skinny Northwest is a new entertainment and listings magazine for Manchester and Liverpool.