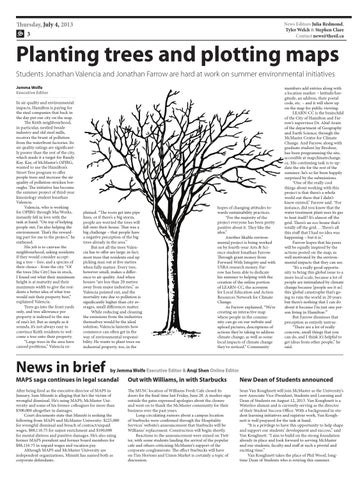 Planting trees and plotting maps Students Jonathan Valencia and Jonathan Farrow are hard at work on summer environmental initiatives Jemma Wolfe Executive Editor In air quality and environmental impacts, Hamilton is paying for the steel companies that back in the day put our city on the map. The Keith neighbourhood, in particular, nestled beside industry and old steel mills, receives the brunt of pollution from the waterfront factories. Its air quality ratings are significantly poorer than the rest of the city, which made it a target for Randy Kay. Kay, of McMaster’s OPIRG, wanted to use the Hamilton’s Street Tree program to offer people trees and increase the air quality of pollution-stricken boroughs. The initiative has become the summer project of third-year kinesiology student Jonathan Valencia. Valencia, who is working for OPIRG through MacWorks, instantly fell in love with the task at hand. “On top of helping people out, I’m also helping the environment. That’s the rewarding part for me to the project,” he enthused. His job is to canvass the neighbourhood, asking residents if they would consider accepting a tree – free, and a species of their choice - from the city. “Of the trees [the City] has in stock, I found out what their maximum height is at maturity and their maximum width to give the residents a better idea of what tree would suit their property best,” explained Valencia. Trees go into the front yards only, and tree allowance per property is indexed to the size of one’s lot. But as simple as it sounds, it’s not always easy to convince Keith residents to welcome a tree onto their property. “Large trees in the area have caused problems,” Valencia ex-

plained. “The roots get into pipe lines, or if there’s a big storm, people are worried the trees will fall onto their house. That was a big challenge – that people have a negative perception of the big trees already in the area.” But not all the trees Valencia has to offer are large; in fact, most trees that residents end up picking max out at five metres when fully mature. Every tree, however small, makes a difference to air quality. And when houses “are less than 20 metres away from major industries,” as Valencia pointed out, and the mortality rate due to pollution is significantly higher than city averages, small differences matter. While reducing and cleaning the emissions from the industries themselves would be the ideal solution, Valencia laments how commerce can often get in the way of environmental responsibility. He wants to plant trees on industrial property, too, in the

hopes of changing attitudes towards sustainability practices. “For the majority of the project everyone has been pretty positive about it. They like the idea.” Another likable environmental project is being worked on by fourth-year Arts &amp; Science student Jonathan Farrow. Through grant money from Forward With Integrity and with USRA research money, Farrow has been able to dedicate his summer to helping with the creation of the online portion of LEARN-CC, the acronym for Local Education and Action Resources Network for Climate Change. As Farrow explained, “We’re creating an interactive map where people in the community can go on our website and upload pictures, descriptions of actions they’re taking to address climate change, as well as some local impacts of climate change they’ve noticed.” Community

members add entries along with a location marker – latitude/longitude, an address, their postal code, etc. – and it will show up on the map for public viewing. LEARN-CC is the brainchild of the City of Hamilton and Farrow’s supervisor Dr. Altaf Arain of the department of Geography and Earth Science, through the McMaster Centre for Climate Change. And Farrow, along with graduate student Jay Brodeur, has been programming the site, accessible at mapclimatechange. ca. His continuing task is to update the site for the rest of the summer; he’s so far been happily surprised by the submissions. “One of the really cool things about working with this project is that there’s a whole world out there that I didn’t know existed,” Farrow said. “For instance, did you know that the water treatment plant uses its gas to heat itself? It’s almost off the grid. There’s an eco house that’s totally off the grid… There’s all this stuff that I had no idea was happening – but it is.” Farrow hopes that his peers will be equally inspired by the actions posted on the map, as well motivated by the environmental impacts that they can see. “It’s a really good opportunity to bring this global issue to a more local scale, because a lot of people are intimidated by climate change because [people see it as] this ‘global catastrophe that’s going to ruin the world in 20 years but there’s nothing that I can do about it because I’m just one person living in Hamilton.’” But Farrow dismisses that perception as entirely untrue. “There are a lot of really concrete, small things that you can do, and I think it’s helpful to get ideas from other people,” he said.

Out with Williams, in with Starbucks

After being fired as the executive director of MAPS in January, Sam Minniti is alleging that he’s the victim of wrongful dismissal. He’s suing MAPS, McMaster University and some of his former colleagues for more than $500,000 altogether in damages. Court documents state that Minniti is seeking the following from MAPS and McMaster University: $225,000 for wrongful dismissal and breach of contract/unpaid wages, $88,116.75 for unjust enrichment and $100,000 for mental distress and punitive damages. He’s also suing former MAPS president and former board members for $88,116.75 in unpaid wages and vacation pay. Although MAPS and McMaster University are independent organizations, Minniti has named both as corporate defendants.

The MUSC location of Williams Fresh Cafe closed its doors for the final time last Friday, June 28. A modest sign outside the gates expressed apologies about the closure and went on to thank the McMaster community for their business over the past years. Long-circulating rumors about a campus location of Starbucks were confirmed through the Hospitality Services’ website’s announcement that Starbucks will be Williams’ replacement. Construction will begin shortly. Reactions to the announcement were mixed on Twitter, with some students lauding the arrival of the popular cafe and others criticizing McMaster’s support of the corporate conglomerate. The effect Starbucks will have on Tim Hortons and Union Market is certainly a topic of discussion.

Sean Van Koughnett will join McMaster as the University’s new Associate Vice-President, Students and Learning and Dean of Students on August 12, 2013. Van Koughnett is a Waterloo alumni and is currently serving as the director of their Student Success Office. With a background in student learning initiatives and registrar work, Van Koughnett is well prepared for the task at hand. “It is a privilege to have this opportunity to help shape and support our students’ development and success,” said Van Koughnett. “I aim to build on the strong foundation already in place and look forward to serving McMaster and our students, faculty and staff at such a pivotal and exciting time.” Van Koughnett takes the place of Phil Wood, longtime Dean of Students who is retiring this summer.

Volume 84, Issue 2 of the McMaster Silhouette 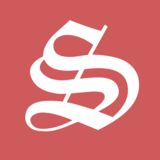