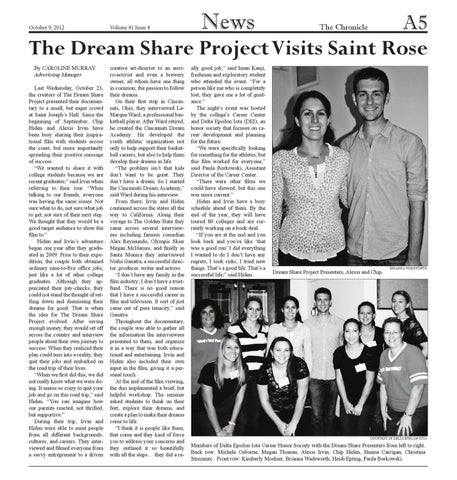 By CAROLINE MURRAY Advertising Manager Last Wednesday, October 23, the creators of The Dream Share Project presented their documentary to a small, but eager crowd at Saint Joseph’s Hall. Since the beginning of September, Chip Hiden and Alexis Irvin have been busy sharing their inspirational film with students across the coast, but more importantly spreading their positive message of success. “We wanted to share it with college students because we are recent graduates,” said Irvin when referring to their tour. “When talking to our friends, everyone was having the same issues. Not sure what to do, not sure what job to get, not sure of their next step. We thought that they would be a good target audience to show the film to.” Hiden and Irvin’s adventure began one year after they graduated in 2009. Prior to their expedition, the couple both obtained ordinary nine-to-five office jobs, just like a lot of other college graduates. Although they appreciated their pay-checks, they could not stand the thought of settling down and dismissing their dreams for good. That is when the idea for The Dream Share Project evolved. After saving enough money, they would set off across the country and interview people about their own journey to success. When they realized their plan could turn into a reality, they quit their jobs and embarked on the road trip of their lives. “When we first did this, we did not really know what we were doing. It seems so crazy to quit your job and go on this road trip,” said Hiden. “You can imagine how our parents reacted, not thrilled, but supportive.” During their trip, Irvin and Hiden were able to meet people from all different backgrounds, cultures, and careers. They interviewed and filmed everyone from a savvy entrepreneur to a driven

creative art-director to an enviro-activist and even a brewery owner, all whom have one thing in common; the passion to follow their dreams. On their first stop in Cincinnati, Ohio, they interviewed LaMarque Ward, a professional basketball player. After Ward retired, he created the Cincinnati Dream Academy. He developed the youth athletic organization not only to help support their basketball careers, but also to help them develop their dreams in life. “The problem isn’t that kids don’t want to be great. They don’t have a dream. So I started the Cincinnati Dream Academy,” said Ward during his interview. From there, Irvin and Hiden continued across the states all the way to California. Along their voyage to The Golden State they came across several interviewees including famous comedian Alex Reymundo, Olympic Skier Megan McHames, and finally in Santa Monica they interviewed Nisha Ganatra, a successful director, producer, writer and actress. “I don’t have any family in the film industry; I don’t have a trustfund. There is no good reason that I have a successful career in film and television. It sort of just came out of pure tenacity,” said Ganatra. Throughout the documentary, the couple was able to gather all the information the interviewees presented to them, and organize it in a way that was both educational and entertaining. Irvin and Hiden also included their own input in the film, giving it a personal touch. At the end of the film viewing, the duo implemented a brief, but helpful workshop. The seminar asked students to think on their feet, explore their dreams, and create a plan to make their dreams come to life. “I think it is people like them, that come and they kind of force you to address your concerns and they outlined it so beautifully with all the steps… they did a re-

ally good job,” said Iman Kanji, freshman and exploratory student who attended the event. “For a person like me who is completely lost, they gave me a lot of guidance.” The night’s event was hosted by the college’s Career Center and Delta Epsilon Iota (DEI), an honor society that focuses on career development and planning for the future. “We were specifically looking for something for the athletes, but this film worked for everyone,” said Paula Borkowski, Assistant Director of the Career Center. “There were other films we could have showed, but this one was more current.” Hiden and Irvin have a busy schedule ahead of them. By the end of the year, they will have toured 80 colleges and are currently working on a book deal. “If you are at the end and you look back and you’re like ‘that was a good run’ I did everything I wanted to do I don’t have any regrets, I took risks, I tried new things. That’s a good life. That’s a successful life,” said Hiden. 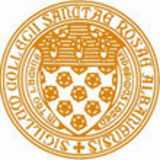