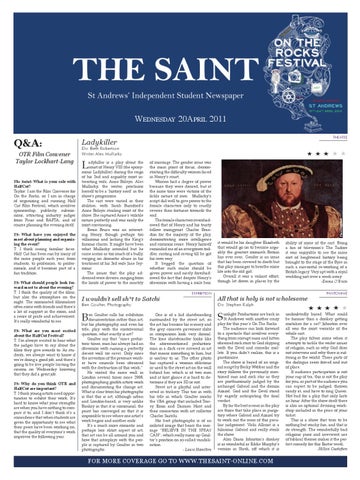 OTR Film Convener Taylor Lockhart-Lang The Saint: What is your role with HalfCut? Taylor: I am the Film Convener for On the Rocks, so I am in charge of organizing and running Half Cut Film Festival, which involves sponsorship, publicity, submissions, attracting industry judges from Pixar and BAFTA, and of course planning the evening itself. TS: What have you enjoyed the most about planning and organizing the event? T: I think seeing familiar faces. Half Cut has been run by many of the same people each year, from students, to professors, to professionals, and it becomes part of a fun tradition. TS: What should people look forward most to about the evening? T: I think the quality of the films, but also the atmosphere on the night. The nominated filmmakers often come with friends and there’s a lot of support in the room, and a sense of pride and achievement. It’s really wonderful to see. TS: What are you most excited about the HalfCut Festival? T: I’m always excited to hear what the judges have to say about the films they give awards to. As students, we always want to know if we’re doing a good job, and there’s going to be five people leaving the cinema on Wednesday knowing that they did a great job. TS: Why do you think OTR and HalfCut are important? T: I think young artists need opportunities to exhibit their work. It’s hard to know what your strengths are when you have nothing to compare it to, and I don’t think it’s a coincidence that when students are given the opportunity to see what their peers have been working on, that the quality of everyone’s work improves the following year.

adykiller is a play about the court of Henry VIII (the eponymous Ladykiller) during the reign of his 2nd and arguably most interesting wife, Anne Boleyn. Alex Mullarky, the writer, proclaims herself to be a ‘history nerd’ in the show’s programme. The cast were varied in their abilities, with Sarah Burnford’s Anne Boleyn stealing most of the show. She captured Anne’s volatile nature perfectly and was easily the most convincing. Ewan Bruce was an interesting Henry, though perhaps too villainous and lacking the King’s famous charm. It might have been what Mullarky intended but he came across as too much of a bully, verging on domestic abuse in his treatment of his 3rd wife Jane Seymour. The issues that the play addressed were diverse, ranging from the limits of power to the sanctity

of marriage. The gender issue was the main point of focus, demonstrating the difficulty women faced in Henry’s court. Women had a degree of power because they were desired, but at the same time were victims of the fickle nature of men. Mullarky’s script did well to give power to the female characters only to cruelly reverse their fortunes towards the end. The female characters overshadowed that of Henry and his trusty fellow misogynist Charles Brandon for the majority of the play, demonstrating more intelligence and common sense. Henry himself reminded me of an overgrown toddler, ranting and raving till he got his own way. It begged the question of whether such males should be given power and nicely foreshadowed the fact that despite Henry’s obsession with having a male heir,

I wouldn’t sell sh*t to Satchi

en Goulter calls his exhibition documentation rather than art, but his photography, and even his title, play with the controversial question; what exactly is art? Goulter say that “since prehistoric times, man has always had an obsession with ruining a perfectly decent wall (or cave). Only since the invention of the pressure washer have councils been obsessed with the destruction of this work.” He visited the same wall in London several times since 2008, photographing graffiti artists work and documenting the change art. What is clear from his photographs is that this is art, although urban and London-based, is very unlike Banksy in that it is communal; the paint has converged so that it is impossible to see where one artist’s work begins and another ends. It’s a much more romantic and perhaps less elitist aspect of art, that art can be all around you and how that interplays with the people is captured by Goulter in two photographs.

One is of a kid skateboarding surrounded by the street art; so the art has become his scenery and the grey concrete pavement slabs in comparison look very dismal. The lone skateboarder looks like the aforementioned prehistoric man in a dark cave covered in art that means something to him, but is unclear to us. The other photo has captured a woman oblivious or used to the street art on the wall behind her, which is of two men and at first glance it is hard to determine if they are 3D or not. Street art is playful and interested in trickery. This ties in with his title in which Goulter mocks the YBA group that included Tracey Emin and Damien Hirst and their connection with art collector Charles Saatchi. His best photographs is of an isolated image that bears the message “BELIEVE IN THE SPRAY CAN”; which really sums up Goulter’s position on so-called vandalisation. - Laura Hamilton

it would be his daughter Elizabeth that would go on to become arguably the greatest monarch Britain has ever seen. Gender is an issue that has been covered to death but this play manages to breathe some life into the old girl. Overall it was a valiant effort, though let down in places by the

ability of some of the cast. Being a fan of television’s The Tudors it was enjoyable to see the same sort of heightened history being brought to the stage of the Byre in such a successful re-working of a British legacy. Very apt with a royal wedding just over a week away. -Emma O’Brien

All that is holy is not wholesome

unlight Productions are back in St Andrews with another crazy play for this year’s On The Rocks. The audience can look forward to a spectacle that involves everything from corrupt nuns and kitten obsessed rock stars to God skyping with the Devil and comedic mallets. If you didn’t realize, this is a pantomime. The show is based of an original script by Becky Webber and the story follows the previously mentioned nun and rock star as they are posthumously judged by the archangel Gabriel and the demon Azazel. God and the Devil stand by eagerly anticipating the final verdict. By far the best scenes in the play are those that take place in purgatory where Gabriel and Azazel try to work out the mess of this peculiar judgement. Vicki Allcoat is a hilarious Gabriel and really steals the show. Also Diana Johnston’s donkey is as wonderful as Eddie Murphy’s version in Shrek, off which it is

For More Coverage GO TO www.thesaint-online.com

undoubtedly based. What could be funnier than a donkey getting mistaken for a cat? Johnston over all was the most versatile of the whole cast. The play falters some when it attempts to tackle the wider issues of religion, such as why God does not intervene and why there is suffering in the world. These parts of the dialogue seem forced and out of place. If audience participation is not your cup of tea, this is not the play for you; as part of the audience you can expect to be judged, thrown candy at, and have to sing Queen. Not bad for a play that only lasts an hour. After the show itself there is also an optional devising workshop included in the price of your ticket. This is a show that tries to be nothing but wacky fun, and that is its strength. The wonderfully bad religious puns and irreverent use of biblical themes makes it the perfect comedy for this Easter week. -Hillevi Gustafson

The Saint covers On The Rocks, the student art festival in St Andrews. 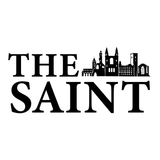