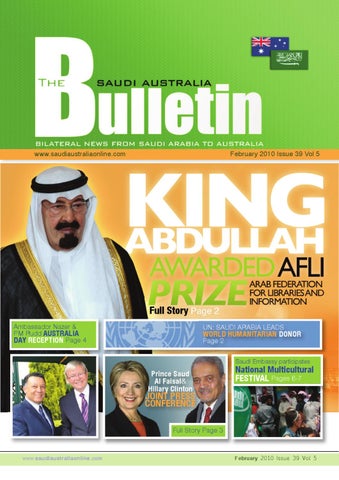 U N :  S A U D I  L E A D S  T H E  WAY  I N HUMINATARIAN DONATIONS Saudi Arabia has been emerging as an important and growing force in aid for humanitarian activities globally, according to a report released by the United Nations . Saudi Arabia has been ranked as “the largest international donor to humanitarian appeals” when measured as a percentage of gross domestic product (GDP). The Kingdom gave 0.19 per cent of the value of its economy to humanitarian funding abroad. This is large in comparison to the US, which spent 0.02 per cent of its GDP on humanitarian aid in 2008. “The UN office in Riyadh commends the nation for its solidarity with fellow countries, and stands ready to continue this agenda through our cooperation programmes and initiatives in the Kingdom and abroad,” said Riyad Musa, the UN’s resident coordinator in the kingdom. He said that the rise of Saudi Arabia as the world’s top humanitarian donor “is a great success and shows the strong commitments of Custodian of the Two Holy Mosques King Abdullah bin Abdulaziz to achieving the UN’s Millennium Development Goals”. The report said the kingdom not only led humanitarian donors as a percentage of GDP when compared to the US, but also in comparison to the more generous European countries, such as Sweden (0.14 ent) and Norway (0.13 per cent).

inister of Foreign Aﬀairs Prince Saud Al-Faisal and U.S. Secretary of State Hillary Clinton held a joint press conference following Secretary Clinton’s meeting with the Custodian of the Two Holy Mosques King Abdullah bin Abdulaziz at his ranch at Rawdhat Khuraim on the outskirts of Riyadh. Prince Saud Al-Faisal said Secretary Clinton had a long indepth, comprehensive and frank discussions with King Abdullah as is customary in their meetings. Prince Saud also said that he also had discussions with the secretary that covered vital regional issues and the other international issues of interest to both countries. Prince Saud noted that the meeting occurred in the week which marked the 65th anniversary of the historic meeting between passing King Abdulaziz, the founder of modern Saudi Arabia and President Franklin Roosevelt on February 14, 1945. “e two leaders laid the foundation of Saudi-U.S. relations which are based on mutual respect, the promotion of joint interests, and joint eﬀorts to serve the United Nations pursuit for achieving international peace and security,” the foreign minister said. ese principles, Prince Saud said, “have helped our two countries to steadfastly confront all challenges and to take signiﬁcant steps to consolidate bilateral relations and to move toward a signiﬁcant strategic stage, according to an institutional framework and through direct contacts between concerned bodies in both countries and signing civil

agreements and memos of understanding in all ﬁelds of scientiﬁc, economic, security, and military cooperation.” Among the most signiﬁcant results of this cooperation is the increase of Saudi students in the United States from 3,000 students to about 25,000 during the last few years, an increase in the volume of trade and investment and travel by Saudi and Americans oﬃcials and private citizens. “Together with the advent of businessmen, this has increased the burden of our consular missions who are required to issue more and more visas and who sometimes face media campaigns calling for its expediting and facilitating measures. In this connection, I raised the issue of tightening the travel measures against Saudi nationals. I noticed that the U.S. Government has sympathetic understanding of the Saudi viewpoint and the Saudi concern in this regard, and that the tightening of measures applies to all travelers to the United States and emanates from our keenness to achieve a balance between security measures and respect of civilian freedoms and basic rights.” On regional and international issue, Prince Saud said the peace process received particular attention and expressed the Kingdom’s appreciation to the U.S. Administration for its prompt movement “to resuscitate the peace process and to treat the major issue of conﬂict within the framework of the two-state solution” which aims at establishing an independent and viable Palestinian state.

e ambassador also oﬀered his best wishes for the Prime Minister of constant good health, happiness, steady progress and prosperity as he provides for the Australian people on the renowned occasion of his country's National Day. On his part, the Australian Prime Minister sent his greetings to the Custodian of the Two Holy Mosques, the royal family and the Saudi people, expressing his satisfaction over the progress of the bilateral relations between the two countries.

Australian Deputy Prime Minister and Education Minister Julia Gillard has received Saudi Ambassador to Australia Hassan Tala't Nazer. During the meeting, they discussed the Program of Custodian of the Two Holy Mosques for Foreign Scholarships, the situation of Saudi students on scholarships in Australia, and joint cultural, educational and political relations between the two countries. Gillard and Nazer expressed their satisfaction over the progress and development of bilateral relations.

Australian Trade Minister Hon. Simon Crean e Australian Trade Minister the Hon. Simon Crean highlighted the important and remarkable progress of the trade and investment between Australia and Saudi Arabia which has been increased considerably in recent years. e Saudi Press Agency correspondent in Australia, conducted an exclusive interview with the Minister Simon Crean during the Foreign Correspondents' Association (FCA), Newsmaker Luncheon in Sydney on ursday 16 February. Minister Crean praised the diplomatic cooperation with the Royal Embassy of Saudi Arabia in Australia , stressing the ongoing development of the relations between the two countries. He stressed the importance of the Kingdom of Saudi Arabia's political and economic, leadership in the Gulf , Middle East and globally , stressing the role that the Saudi Arabia can be played in accelerating the FTA negotiations currently under way between Australia and the GCC.

Ambassador Hassan Nazer with Deputy Prime Minister Ms Julia Gillard Minister Crean expressed the Australian desire to strengthen the prospects of trade and investment cooperation between the two countries “Australia’s interest to invest in the education sector, which witnessed a clear growth in recent years including the possibility of opening a new campus of the Australian Universities in Saudi Arabia “Minister Crean said. e Minister also expressed the Australia interest to strengthen and open the doors of investment with Saudi Arabia in the sectors of agriculture, livestock and mining .

mbassador of the Saudi Arabia to Australia Mr Hassan Talat Nazer has praised the activities and cultural events, held on the 14th multi-cultural festival, in the Australian capital Canberra, under the presence of performers and visitors from across the nation and globe with participation of over 44 foreign countries and 578 exhibitors from Australia and abroad. is year the Saudi Arabia Al Khaimah Exhibition presented the Haramain, Holy City Mosques as well as photographs and paintings as part of the heritage of the Kingdom and its modern renaissance, they also distributed a large number of books, publications and press releases Minister of Multiculture in ACT, Ms Joy Burch telling the story of the Kingdom and the achieve- MLA with Saudi Students at the Festival

ments in its development. e President and members of the club of the Saudi students present in the capital Canberra, wore the national dress in the tent of Saudi Arabia as they provided coﬀee and dates, which had the attention of the public and the festival tent made of Saudi Arabia. Also played inside the tent was a documentary ﬁlm in English depicting the full proﬁles of life in Saudi Arabia and its cultural development. e opening ceremony of the festival included a large space for art including the traditional Saudi dance performed by students for the second time on the festival stage as they mingled with the enthusiastic voices of the

SA BULLETIN PAGE 7 Ambassador meets with Heads of Saudi Student Clubs for 2010 Saudi Ambassador to Australia and New Zealand Hassan Talaat Nazer has met with the new heads of Saudi Students Clubs in Australia for the year 2010. The ambassador has emphasized the importance of the objectives  of  the  Program  of  Custodian  of  the Two  Holy Mosques for Foreign Scholarships, reviewing the role of the embassy in cooperation with the clubs and its support for their cultural, social and sports activities. On the other hand, Saudi Cultural Attaché Dr. Ali bin Mohammed Al-Bishri has met with the heads of the Saudi Students Clubs in Australia and they discussed administrative and financial aspects of the clubs.

surrounding scene as swords and drums and banners carried by the uniﬁed Saudi students, chanting songs of joy and peace. e Ambassador His Excellency Hassan Nazer expressed his gratitude and stressed the importance of participating in various cultural events to bring the message of the Kingdom’s emerging values of civilization and modernity to all Australian people and the friendly people of the world at large. e ambassador expressed his satisfaction of the successful Saudi Cultural Exhebiton and all others, praising the great eﬀorts in preparing and arranging their participation in the festival. e Ambassador thanked the Saudi cultural attaché, and the members of the Saudi Student Club in Canberra including students who participated in the Multicultural Day festival, valuing their combined great eﬀorts. For her part, Minister of multiculture in the Australian capital, Canberra, Ms Joy Burch MLA expressed her appreciation of the Saudi Arabia tent and also thanked the participation of all important actors in the festival.

he Saudi Ambassador to Australia His Saudi Ambassasdor Hassan Nazer, Cultural Attache Dr. Ali Bishri, Saudi Air Gaurd Pilot Major General Rashid Al Zahrani and Brigader General Excellency Mr. Hassan Nazer patronShaddad Al Asmari with Saudi graduated pilots at the Australian Academy ized the graduated ﬁrst group of pilots wards the graduation of the ﬁrst Saudi pilot group in Australia as part of the Saudi National Guard Training at the Sunand wished all the graduated pilots success, urging them to shine Coast Australian Academy, in Queensland. e gradapply what they have learned gratefully into their homeland. uation was held in the presence of the President of the Royal Saudi Air Guard pilot board , Major General Rashid al-Zahrani, Brigadier General Shaddad Al Asmari, culture attaché in Australia Dr. Ali Bishri and a number of senior oﬃcials of the academy.In a speech ceremony held on the occasion, Ambassador Nazer conveyed the greetings and congratulations of the Custodian of the Two Holy Mosques King Abdullah bin Abdulaziz Al Saud, Crown Prince Sultan bin Abdulaziz and Second Deputy Premier and Minister of Interior, Prince Naif bin Abdulaziz, to all the graduates.Ambassador Nazer expressed his pride to- 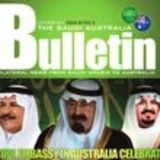