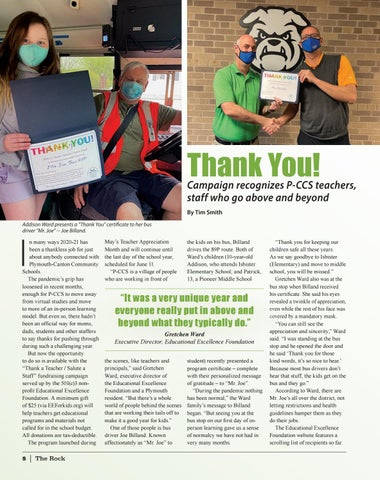 Campaign recognizes P-CCS teachers, staff who go above and beyond By Tim Smith

n many ways 2020-21 has been a thankless job for just about anybody connected with Plymouth-Canton Community Schools. The pandemic’s grip has loosened in recent months, enough for P-CCS to move away from virtual studies and move to more of an in-person learning model. But even so, there hadn’t been an official way for moms, dads, students and other staffers to say thanks for pushing through during such a challenging year. But now the opportunity to do so is available with the “Thank a Teacher / Salute a Staff” fundraising campaign served up by the 501(c)3 nonprofit Educational Excellence Foundation. A minimum gift of $25 (via EEForkids.org) will help teachers get educational programs and materials not called for in the school budget. All donations are tax-deductible. The program launched during 8

May’s Teacher Appreciation Month and will continue until the last day of the school year, scheduled for June 11. “P-CCS is a village of people who are working in front of

the kids on his bus, Billand drives the 89P route. Both of Ward’s children (10-year-old Addison, who attends Isbister Elementary School; and Patrick, 13, a Pioneer Middle School

“It was a very unique year and everyone really put in above and beyond what they typically do.” ­Gretchen Ward Executive Director, Educational Excellence Foundation the scenes, like teachers and principals,” said Gretchen Ward, executive director of the Educational Excellence Foundation and a Plymouth resident. “But there’s a whole world of people behind the scenes that are working their tails off to make it a good year for kids.” One of those people is bus driver Joe Billand. Known affectionately as “Mr. Joe” to

student) recently presented a program certificate – complete with their personalized message of gratitude – to “Mr. Joe”. “During the pandemic nothing has been normal,” the Ward family’s message to Billand began. “But seeing you at the bus stop on our first day of inperson learning gave us a sense of normalcy we have not had in very many months.

“Thank you for keeping our children safe all these years. As we say goodbye to Isbister (Elementary) and move to middle school, you will be missed.” Gretchen Ward also was at the bus stop when Billand received his certificate. She said his eyes revealed a twinkle of appreciation, even while the rest of his face was covered by a mandatory mask. “You can still see the appreciation and sincerity,” Ward said. “I was standing at the bus stop and he opened the door and he said ‘Thank you for those kind words, it’s so nice to hear.’ Because most bus drivers don’t hear that stuff, the kids get on the bus and they go.” According to Ward, there are Mr. Joe’s all over the district, not letting restrictions and health guidelines hamper them as they do their jobs. The Educational Excellence Foundation website features a scrolling list of recipients so far.