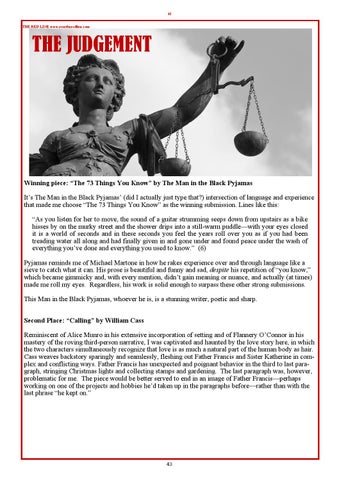 Winning piece: “The 73 Things You Know” by The Man in the Black Pyjamas It’s The Man in the Black Pyjamas’ (did I actually just type that?) intersection of language and experience that made me choose “The 73 Things You Know” as the winning submission. Lines like this: “As you listen for her to move, the sound of a guitar strumming seeps down from upstairs as a bike hisses by on the murky street and the shower drips into a still-warm puddle—with your eyes closed it is a world of seconds and in these seconds you feel the years roll over you as if you had been treading water all along and had finally given in and gone under and found peace under the wash of everything you’ve done and everything you used to know.” (6) Pyjamas reminds me of Michael Martone in how he rakes experience over and through language like a sieve to catch what it can. His prose is beautiful and funny and sad, despite his repetition of “you know,” which became gimmicky and, with every mention, didn’t gain meaning or nuance, and actually (at times) made me roll my eyes. Regardless, his work is solid enough to surpass these other strong submissions. This Man in the Black Pyjamas, whoever he is, is a stunning writer, poetic and sharp. Second Place: “Calling” by William Cass Reminiscent of Alice Munro in his extensive incorporation of setting and of Flannery O’Connor in his mastery of the roving third-person narrative, I was captivated and haunted by the love story here, in which the two characters simultaneously recognize that love is as much a natural part of the human body as hair. Cass weaves backstory sparingly and seamlessly, fleshing out Father Francis and Sister Katherine in complex and conflicting ways. Father Francis has unexpected and poignant behavior in the third to last paragraph, stringing Christmas lights and collecting stamps and gardening. The last paragraph was, however, problematic for me. The piece would be better served to end in an image of Father Francis—perhaps working on one of the projects and hobbies he’d taken up in the paragraphs before—rather than with the last phrase “he kept on.”