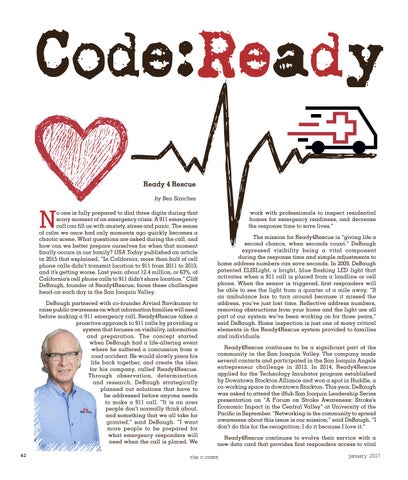 work with professionals to inspect residential homes for emergency readiness, and decrease the response time to save lives.”

o one is fully prepared to dial three digits during that scary moment of an emergency crisis. A 911 emergency call can fill us with anxiety, stress and panic. The sense of calm we once had only moments ago quickly becomes a chaotic scene. What questions are asked during the call, and how can we better prepare ourselves for when that moment finally occurs in our family? USA Today published an article in 2015 that explained, “In California, more than half of cell phone calls didn’t transmit location to 911 from 2011 to 2013, and it’s getting worse. Last year, about 12.4 million, or 63%, of California’s cell phone calls to 911 didn’t share location.” Cliff DeBaugh, founder of Ready4Rescue, faces these challenges head-on each day in the San Joaquin Valley.

The mission for Ready4Rescue is “giving life a second chance, when seconds count.” DeBaugh expressed visibility being a vital component during the response time and simple adjustments to home address numbers can save seconds. In 2009, DeBaugh patented ELISLight, a bright, blue flashing LED light that activates when a 911 call is placed from a landline or cell phone. When the sensor is triggered, first responders will be able to see the light from a quarter of a mile away. “If an ambulance has to turn around because it missed the address, you’ve just lost time. Reflective address numbers, removing obstructions from your home and the light are all part of our system we’ve been working on for three years,” said DeBaugh. Home inspection is just one of many critical elements in the Ready4Rescue system provided to families and individuals.

DeBaugh partnered with co-founder Arvind Ravikumar to raise public awareness on what information families will need before making a 911 emergency call. Ready4Rescue takes a proactive approach to 911 calls by providing a system that focuses on visibility, information and preparation. The concept started when DeBaugh had a life-altering event where he suffered a concussion from a road accident. He would slowly piece his life back together, and create the idea for his company, called Ready4Rescue. Through observation, determination and research, DeBaugh strategically planned out solutions that have to be addressed before anyone needs to make a 911 call. “It is an area people don’t normally think about, and something that we all take for granted,” said DeBaugh. “I want more people to be prepared for what emergency responders will need when the call is placed. We 42

Ready4Rescue continues to be a significant part of the community in the San Joaquin Valley. The company made several contacts and participated in the San Joaquin Angels entrepreneur challenge in 2012. In 2014, Ready4Rescue applied for the Technology Incubator program established by Downtown Stockton Alliance and won a spot in Huddle, a co-working space in downtown Stockton. This year, DeBaugh was asked to attend the iHub San Joaquin Leadership Series presentation on “A Forum on Stroke Awareness: Stroke’s Economic Impact in the Central Valley” at University of the Pacific in September. “Networking in the community to spread awareness about this issue is our mission,” said DeBaugh. “I don’t do this for the recognition; I do it because I love it.” Ready4Rescue continues to evolve their service with a new data card that provides first responders access to vital 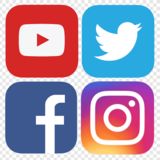