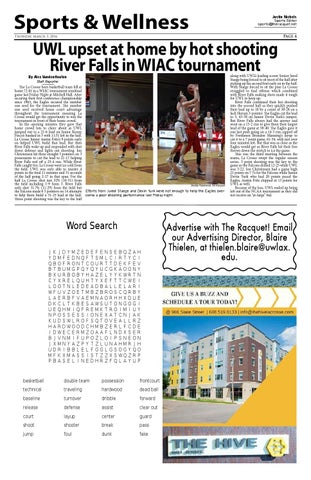 The La Crosse boys basketball team fell at home 72-61 in a WIAC tournament semifinal game last Friday Night at Mitchell Hall. After securing their first conference championship since 1965, the Eagles secured the number one seed for the tournament. The number one seed received home court advantage throughout the tournament meaning La Crosse would get the opportunity to win the tournament in front of their home crowd. In the opening minutes they gave that home crowd lots to cheer about as UWL jumped out to a 21-6 lead on Junior Kenny Finco’s banked in 3 with 11:31 left in the half. La Crosse Junior Austin Fritz’s 9 points early on helped UWL build that lead. But then River Falls woke up and responded with shut down defense and lights out shooting. Jon Christensen hit three straight 3 pointers on 3 possessions to cut the lead to 21-17 helping River Falls reel off a 25-4 run. While River Falls caught fire, La Crosse went ice cold from the field. UWL was only able to muster 4 points in the final 11 minutes and 31 seconds of the half going 2-17 in that span. For the half La Crosse shot just 32% (10-31) from the field including 1-9 from 3. River Falls only shot 31.7% (11-29) from the field but the Falcons made 6 3 pointers on 14 attempts to help them build a 31-25 lead at the half. Three point shooting was the key to the half

along with UWL’s leading scorer Senior Jared Staege being forced to sit most of the half after picking up his second foul early on in the half. With Staege forced to sit the pine La Crosse struggled to find offense which combined with River Falls making shots made it tough for UWL to keep up. River Falls continued their hot shooting into the second half as they quickly pushed their lead up to 10 by a count of 38-28 on a Jack Herum 3-pointer. The Eagles cut the lead to 5, 43-38 on Junior Devin Yurk’s jumper. But River Falls always had the answer and went on a 15-2 run to give them their largest lead of the game at 58-40. The Eagles gave it one last push going on a 14-3 run capped off by Freshmen Brendon Manning’s layup to cut it to a 7 point game, 61-54, with just over four minutes left. But that was as close as the Eagles would get as River Falls hit their free throws down the stretch to ice the game. This was the third meeting between the teams, La Crosse swept the regular season series. 3 point shooting was the key to the game as the Falcons drilled 12-25 while UWL was 3-22. Jon Christensen had a game high 21 points on 7 3’s for the Falcons while Junior Devin Yurk who had 20 points paced the Eagles, Austin Fritz chipped in 13 points for UWL as well. Because of the loss, UWL ended up being left out of the NCAA tournament as they did not receive an “at-large” bid.

Advertise with The Racquet! Email our Advertising Director, Blaire Thielen, at thielen.blaire@uwlax. edu.

Build your own custom worksheet at education.com/worksheet-generator 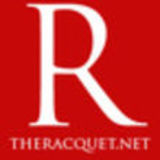