The Quarantine Train — A Poetry Workshop | Curated by Arjun Rajendran 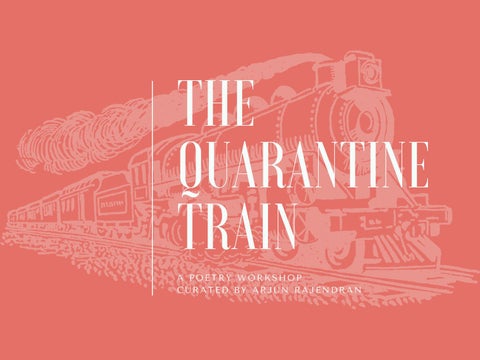 THE QUARANTINE TRAIN A POETRY WORKSHOP CURATED BY ARJUN RAJENDRAN

&quot;Arjun Rajendran has been called one of the most versatile, contemporary Indian poets of today. He writes about wide-ranging themes: from memories to beetroots, and even about Snowy and Tintin! The poet, whose fourth book is to be published in 2020, was the Charles Wallace Fellow for Creative Writing at the University of Stirling, Scotland in 2018 and is the Poetry Editor of The Bombay Literary Magazine.&quot; â&amp;#x20AC;&amp;#x201D; BOUND MAGAZINE

When Arjun Rajendran posted about a poetry workshop on Facebook, the response was immediate and overwhelming. THE

The journey began with appreciating the work of celebrated poets, and the train halted, trilled its whistles or sped through tracks imprinted on the mind by poems seen and scented through the trainâ&amp;#x20AC;&amp;#x2122;s windows. Shortly into the modern world&#39;s largest quarantine, we are on an unprecedented journey of delight and discovery, of camaraderie and experimentation.

The Quarantine Train began its journey sometime before the onset of Covid-19 in March 2020. The workshop soon became the talk of the town, and it needed a name. After many discussions, Arjun&#39;s suggestion seemed agreeable and it became the workshop&#39;s call-sign. The name is also influenced by lines from a poem by Arjun. The name represents the journey of a motley group in a social-distancing milieu, bound by one fact: they are all smitten by the poetry bug. For the poet must strike a path unknown, nourished by the company of Â peers, in pursuit of this very elusive of literary arts.

TRAIN BEHIND THE NAME

The workshop covers key poetic terms and devices by studying poems by modern and contemporary poets, and then provides the members a chance to try writing new drafts using prompts. Throughout the workshop, members get a chance to get their drafts critiqued and get feedback, to arrive at more polished poems. Members also get the opportunity to lead workshop sessions, where they may take up a poet, a genre, or any relevant literary stations for discussion.

The workshop has a diverse membership, both national and international. Ranging from 18-70 years, there is a cosmopolitan mix of poets, writers, and scholars, both emerging and the accomplished, interacting in a learning environment that thrives on sharing ideas, creative conversations, and a spirit of adventure. TQT is committed to diversity in membership, in the work that members produce, and the content of workshops. The workshop aims to include, analyse, and produce work written in various languages, work which bends generic boundaries, and which originates from varied histories and people from different walks of life.

The workshopÂ is a safe space and there is zero tolerance for harassment. While the workshop has no rigorous rules, adherence to the following points is mandatory: Mutual respect Conversations relevant to art and literature Regular participation Curiosity Motivation Cooperative spirit to further learning Confidentiality of discussions Administrators reserve the right to modify events/topics and will remove inactive members or those who violate rules. Please read our Zero Tolerance Policy for your understanding.

ZERO TOLERANCE POLICY The Quarantine Train follows a strict Zero Tolerance Policy with regards to harassment of any kind. TQT is committed to being a safe space for everyone irrespective of personal experiences, race, religion, caste, national or social origin, sexual orientation, gender, or political views. All members are encouraged to honour othersâ&amp;#x20AC;&amp;#x2122; differences, privacy, and boundaries so that it can truly be a space free of fear, bullying, and hurt of any kind. If any member of the group behaves untowardly with another, the Curators will intervene. Such behaviour may include repeatedly commenting on a colleagueâ&amp;#x20AC;&amp;#x2122;s photograph/status, pestering them even when the other party is disinterested, prying on personal lives, and any other way of putting them in awkward situations. If healthy personal relationships are developed outside of the group, that is the personal matter of the members. However, if any member of the group feels threatened or has a cause to complain against another, they are encouraged to message Arjun Rajendran (Curator) or Sivakami Velliangiri (Co-curator). Being a part of TQT does not absolve anyone of misbehaviour, instead the workshop strives to assure everyone a safe space.

The Quarantine Train membership is by invitation only. Once you&#39;re added to the WhatsApp group, please introduce yourself and provide your email ID. A copy of your introduction and email ID should be sent via WhatsApp to Kinjal Sethia @ 75062 00014, andÂ you&#39;ll be added to the email group and the Google archive. For the bi-weekly sessions, you&#39;ll get a Zoom conferencing invite in your email few hours prior.

The Quarantine Train is on Facebook where you can find updates, listen to podcasts of earlier workshops, and enjoy other creative initiatives by the workshop participants.Â www.facebook.com/TheQuarantineTrain/

Co-Curator Sivakami is the author of ‘How We Measured Time’. Her poems have appeared in various publications around the world. She finds TQT, a poetry movement, snowballing beyond aspirations.

ASWIN VIJAYAN Managing Editor Aswin is a poet, teacher, and researcher interested in concerns of language and spatiality. TQT has proved to be the answer to his quest for a community of poets.

PERVIN SAKET Managing Editor Pervin Saket is the author of ‘Urmila’ and ‘A Tinge of Turmeric’, and co-founder of the annual Dum Pukht Writers Workshop, Pondicherry. Pervin is delighted that TQT is a community for dedicated poets curious about the craft of writing.

Translations Coordinator Devanshi joined TQT to find a community of poets at a time of uncertainties. She spends her days running, writing about Elena Ferrante, and translating from Italian and Hindi into English.

Kinjal is a Pune-based feature writer, focusing on culture and creativity. She joined TQT hoping poetry, as the highest art form, will help hone her craft of writing.

PRASHANT PARVATNENI Allied Arts Coordinator Prashant lives in Bangalore, writes poetry, and teaches art and cinema. He won the Srinivas Rayaprol Poetry Prize in 2019. For him, TQT is a collective space for experimenting with the art of writing.

International Coordinator With degrees in Chinese &amp; English literature, Anesce is a U.S. poet, blogger, and aspiring novelist. While travelling in India, lockdown struck and she found herself sipping tea aboard the scenic route of TQT.

ABBAS BAGASRAWALA Funds Manager Abbas is an entrepreneur and engineer, and has actively been writing fiction and non-fiction. TQT for him represents diversityâ&amp;#x20AC;&amp;#x201D;people and poems, and a channel for his creativity.

SONI SOMARAJAN Creative Head A copywriter and alumnus of Iowa Universityâ&amp;#x20AC;&amp;#x2122;s IWP Advanced Poetry Seminar, Soni&#39;s first book of poetry is due in 2020. TQT fulfills his need to sustain the daily mindfulness that poetry demands.

Sessions Coordinator Shobhana has authored two collections of verse and six books of non-ficion. Her book of haibun is forthcoming. She is a pluviophile and TQTrain is the best thing that has happened to her.

ARATHY ASOK Moderator Arathy Asok is a bilingual writer and poet. Her work has been described as &quot;resistance poetry with a sharp edge&quot;(JoCL). TQT has been a huge learning experience for her and she believes it to be historical.

SUMIT CHAUDHARY Moderator Sumit, a poet-programmer, believes memes can generate interest in difficult texts. He translates Rajasthani texts to English. TQT allows him to explore poetry&#39;s modalities in a sodality of writers.

&quot;Most of all, I enjoy the company of writers who have become my friends, to be able to talk to them about literature but within the familiar setting of trust and camaraderie, over many bottles of good liquor and outside any institutional or exhibitionist glare.&quot; ARJUN RAJENDRAN SOURCE: BOUND MAGAZINE

The Quarantine Train — A Poetry Workshop | Curated by Arjun Rajendran

The Quarantine Train is a great entry point for those interested in the art of poetry writing. The brochure presents a synopsis of the workshop's trajectory, its vision, salient features, and information useful to those joining the journey.