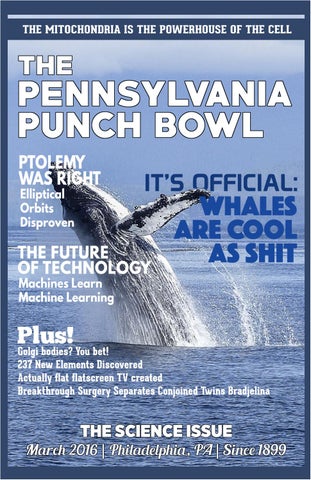 Unfortunately we do not get enough funding for a full-color version of this issue. But we created a fascinating infographic to show you the layers of the Earth. It was an in-depth examination of the Crust, the Mantle, the Mickey Mantle, the Manatee, the Outer Core,

the Hardcore Punk, and that part you missed learning about in Geology last Friday. But we can’t afford to print that. So instead you get this:

Copyright Punch Bowl 2016. All characters appearing in this work are fictitious. Any resemblance to real persons, living, dead, or living-dead, is purely coincidental.

Dear Serfs: I write to you today in defense of the empirical power of the social sciences (except for anthropology, that’s a hard pass). While normally I only lower myself to your level to remind you of the importance of my existence and how good I look SABsing in a pleather shift dress, the disturbing trend of discounting myself and my academic peers has upset me deeply and you will all pay to soothe my anger with an exorbitant salary increase. I am a limber, blonde Old Testament God and your irreverence will cost you deeply. The consistent assault on the rigor and explanatory power of the social sciences will not be stemmed solely by fiscal punishment however; the situation requires a robotically impassioned defense, a rhetorical aesthetic I have honed through my years as a political scientist and tenure as Penn’s fearless Tsarina. Firstly, and perhaps most importantly, the power of multiple regression must not be discounted. That is to say, we use numbers too. We are not simply, as some have suggested, “making shit up,” but rather constructing convoluted statistical models based on messily collected and processed data in order to test armchair theorizations about the social world. This, fools, is science in all its glory! Also, I remind you that economics is technically a social science. Yes, that means all Wharton students are just super-entitled social scientists who will go on to perpetuate the extreme levels of inequality that sociologists will study for centuries to come. Social scientists are epistemological autotrophs. Truly, we can all call ourselves doctors. While a time in history has not yet arisen where my people have been useful in answering the terrified cry of “Is anyone on this plane a doctor?!” that does not mean our time will never come. Bask in your discoveries of “evolution” and “gravity” for now, but know that we are not to be counted out. If you take nothing else from the above treatise, remember this: I am listening and I can revoke your degree at any time. I have my ear to the ground; I’m omniscient but I enjoy acting out idiomatic expressions and the physical sensation of resting my ears on the cool Italian marble that makes up the entirety of my palace. Shove it,

Alchemy 101 There are some days when we’re feeling particularly protoscientific. Here are some alchemy recipes that are sure to convert your day into pure gold! How to make The Elixir of Immortality 1. Pore over every Elite Daily article about Grumpy Cat. Write a paper about how long he would last in a Doomsday scenario. 2. Add 3 vials of blood from a werewolf, or from Grammy nominated superproducer Pharrell Williams, whichever is most convenient for you. :) 3. Pace around the room muttering under your breath “Dippin Dots are the ice cream of the future” for 5 - 30 minutes. 4. Make a 10 L solution of 1 M Red Bull. 5. Whisk together in a bowl and thank Chef D for the wonderful meal. How to Make an Alkahest (Universal Solvent)

How To Make Your Dearly Departed Love Return To You From The Netherworld 1. Call Corey Feldman. Ask how he’s doing. Let me know how he’s doing. He hasn’t returned my calls. 2. Attend that chemistry recitation that you haven’t attended all semester. 3. Contract yellow fever. 4. Rap the Dr. Dre verse from “No Diggity” in 4 regional dialects of Spanish. 5. Head to the nearest McDonald’s bathroom on the 3rd Wednesday of the month. Your recently lost love will be waiting for you by the soap dispenser.

1. Apologize to Venus Williams for that mean tweet about her from December. You didn’t write the tweet, but being a bystander and not speaking up is the same as writing it yourself, you prick. 2. Combine the urine of six varieties of wolf local to your area. 3. Subscribe to Forbes magazine for the latest business and financial news. Enter the promo code THEIRISHPOTATOFAMINENEVERHAPPENED to get the first 6 months of issues for free! 4. Pick nine symmetrical daffodils from the local community garden. 5. Run the urine from step 2 through a Brita filter and enjoy!

Apology from the Editors On May 17th, 2015, The Pennsylvania Punch Bowl published an article discussing the viability of a potential new species that could serve as an alternate source of companionship, similar to the way that canines have serve as companions for millennia. This species has been created by crossbreeding the common North American opossum, also known by their scientific name Didelphimorphia, with the Platypus, also known as Ornithorhynchus anatinus. Despite what we might have implied earlier, this is NOT a viable animal. Not for companionship, not for food, not for warmth, and CER-

TAINLY don’t even think about trying to train it to be a service animal. This is a MEAN animal. We repeat, this little guys are mean as SHIT. Also we are worried they might be poisonous. We’d run tests, but Martin got bit last month and he hasn’t been the same since. And we also haven’t been able to find any of them for over a week. They seem to have escaped the confines of the lab. We think they might be living inside of the walls... Expect an update in future volumes. Godspeed.

Questions Science Hasn’t Answered How do birds work? Why can’t birds walk but humans can swim? How hot do ovens get? Why is water in a cup clear but water in the ocean blue? If you cover a fish’s gills, does it drown or choke? What’s the difference between pancakes and flapjacks? How does a screenshot work? What is dark matter? Why do we focus on dark matter? Doesn’t light matter matter? Doesn’t all matter matter? How can our eyes be real if mirrors are real? What does it all mean? Are dart frogs good at playing darts? How do you beat Candy Crush? Is it possible to beat Candy Crush? How many levels are there in Candy Crush? Which candy in Candy Crush would taste best? Why are snakes so weird? Why are tennis balls covered in fuzz? If the sun is at an altitude of 15 degrees on your southern horizon, it’s 3am UTC, and you’re at sea without water on Christmas morning, what’s your latitude? What does the word diaphanous mean? Can humans echolocate? Why do some planes fly at higher altitudes than others. Can you really turn orange if you eat too many carrots? How come there are more days in July than in June? How much toilet paper does a human consume in one fiscal year? How many volts are in an electric eel? Could an electric eel power a conventional lightbulb? For how long? How come there are so many different types of potatoes? Which limb is easiest to live without? Lizard tails grow back? Has anyone ever proved that ghosts don’t exist? Which bear is best? What’s your favorite Animorph? How do you actually make alcohol? Relatively, how important is relativity? How do you convert Celsius to Fahrenheit? Why don’t people talk about what coffee does to your digestive system? What came first, the chicken or the egg? What came first, the candy or the galaxy? Who came first, the man or the woman? How many hot dogs does it take to result in a 95% chance of death? What does the inside of the inside of a computer look like? 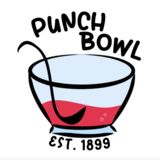