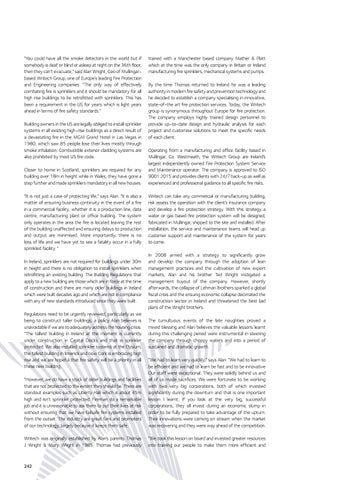 “You could have all the smoke detectors in the world but if somebody is deaf or blind or asleep at night on the 36th floor, then they can’t evacuate,” said Alan Wright, Ceo of Mullingarbased Writech Group, one of Europe’s leading Fire Protection and Engineering companies. “The only way of effectively combating fire is sprinklers and it should be mandatory for all high rise buildings to be retrofitted with sprinklers. This has been a requirement in the US for years which is light years ahead in terms of fire safety standards.” Building owners in the US are legally obliged to install sprinkler systems in all existing high-rise buildings as a direct result of a devastating fire in the MGM Grand Hotel in Las Vegas in 1980, which saw 85 people lose their lives mostly through smoke inhalation. Combustible exterior cladding systems are also prohibited by most US fire code. Closer to home in Scotland, sprinklers are required for any building over 18m in height while in Wales, they have gone a step further and made sprinklers mandatory in all new houses. “It is not just a case of protecting life,” says Alan. “It is also a matter of ensuring business continuity in the event of a fire in a commercial facility, whether it is a production line, data centre, manufacturing plant or office building. The system only operates in the area the fire is located leaving the rest of the building unaffected and ensuring delays to production and output are minimised. More importantly, there is no loss of life and we have yet to see a fatality occur in a fully sprinkled facility. “ In Ireland, sprinklers are not required for buildings under 30m in height and there is no obligation to install sprinklers when retrofitting an existing building. The Building Regulations that apply to a new building are those which are in force at the time of construction and there are many older buildings in Ireland which were built decades ago and which are not in compliance with any of new standards introduced since they were built. Regulations need to be urgently reviewed, particularly as we being to construct taller buildings; a policy Alan believes is unavoidable if we are to adequately address the housing crisis. “The tallest building in Ireland at the moment is currently under construction in Capital Docks and that is sprinkler protected. We also installed sprinkler systems at the Elysium, the tallest building in limerick and now Cork is embracing high rise and we are hopeful that fire safety will be a priority in all these new building.

trained with a Manchester based company Mather &amp; Platt which at the time was the only company in Britain or Ireland manufacturing fire sprinklers, mechanical systems and pumps. By the time Thomas returned to Ireland he was a leading authority in modern fire safety and prevention technology and he decided to establish a company specialising in innovative, state-of-the art fire protection services. Today, the Writech group is synonymous throughout Europe for fire protection. The company employs highly trained design personnel to provide up-to-date design and hydraulic analysis for each project and customise solutions to meet the specific needs of each client. Operating from a manufacturing and office facility based in Mullingar, Co. Westmeath, the Writech Group are Ireland’s largest independently owned Fire Protection System Service and Maintenance operator. The company is approved to ISO 9001:2015 and provides clients with 24/7 back-up as well as experienced and professional guidance to all specific fire risks, Writech can take any commercial or manufacturing building, risk assess the operation with the client’s insurance company and develop a fire protection strategy. With this strategy a water or gas based fire protection system will be designed, fabricated in Mullingar, shipped to the site and installed. After installation, the service and maintenance teams will head up customer support and maintenance of the system for years to come. In 2008 armed with a strategy to significantly grow and develop the company through the adoption of lean management practices and the cultivation of new export markets, Alan and his brother Ted Wright instigated a management buyout of the company. However, shortly afterwards, the collapse of Lehman Brothers sparked a global fiscal crisis and the ensuing economic collapse decimated the construction sector in Ireland and threatened the best laid plans of the Wright brothers. The tumultuous events of the late noughties proved a mixed blessing and Alan believes the valuable lessons learnt during this challenging period were instrumental in steering the company through choppy waters and into a period of sustained and dramatic growth.

“However, we do have a stock of older buildings and facilities that are not protected to the extent they should be. There are standout examples such as Liberty Hall which is about 45m high and isn’t sprinkler protected. Fireman do a remarkable job and it is unreasonable to ask them to put their lives at risk without ensuring that we have failsafe fire systems installed from the outset. The industry are great fans and promoters of our technology, largely because it keeps them safe.

“We had to learn very quickly,” says Alan. “We had to learn to be efficient and we had to learn be fast and to be innovative Our staff were exceptional. They were solidly behind us and all of us made sacrifices. We were fortunate to be working with two very big corporations, both of which invested significantly during the downturn and that is one important lesson I learnt. If you look at the very big, successful corporations, they all invest during an economic slump in order to be fully prepared to take advantage of the upturn. Their innovations were coming on stream when the market was recovering and they were way ahead of the competition. 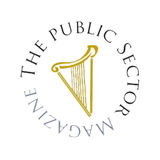