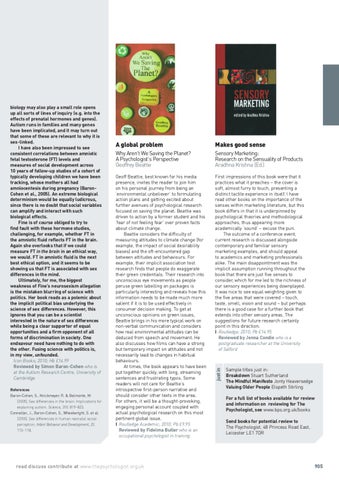 Why Aren't We Saving the Planet? A Psychologist's Perspective Geoffrey Beattie

Geoff Beattie, best known for his media presence, invites the reader to join him on his personal journey from being an ‘environmental unbeliever’ to formulating action plans and getting excited about further avenues of psychological research focused on saving the planet. Beattie was driven to action by a former student and his ‘fear of not feeling fear’ over proven facts about climate change. Beattie considers the difficulty of measuring attitudes to climate change (for example, the impact of social desirability biases) and the oft-encountered gap between attitudes and behaviours. For example, their implicit association test research finds that people do exaggerate their green credentials. Their research into unconscious eye movements as people peruse green labelling on packages is particularly interesting and reveals how this information needs to be made much more salient if it is to be used effectively in consumer decision making. To get at unconscious opinions on green issues, Beattie brings in his more typical work on non-verbal communication and considers how real environmental attitudes can be deduced from speech and movement. He also discusses how films can have a strong but temporary impact on attitudes and not necessarily lead to changes in habitual behaviours. At times, the book appears to have been put together quickly, with long, streaming sentences and frustrating typos. Some readers will not care for Beattie’s introspective first-person narrative and should consider other texts in the area. For others, it will be a thought-provoking, engaging personal account coupled with actual psychological research on this most pertinent global issue. I Routledge Academic; 2010; Pb £9.95 Reviewed by Fidelma Butler who is an occupational psychologist in training

First impressions of this book were that it practices what it preaches – the cover is soft, almost furry to touch, presenting a distinct tactile experience in itself. I have read other books on the importance of the senses within marketing literature, but this book differs in that it is underpinned by psychological theories and methodological approaches, thus appearing more academically ‘sound’ – excuse the pun. The outcome of a conference event, current research is discussed alongside contemporary and familiar sensory marketing examples, and should appeal to academics and marketing professionals alike. The main disappointment was the implicit assumption running throughout the book that there are just five senses to consider, which for me led to the richness of our sensory experiences being downplayed. It was nice to see equal weighting given to the five areas that were covered – touch, taste, smell, vision and sound – but perhaps there is a good case for a further book that extends into other sensory areas. The suggestions for future research certainly point in this direction. I Routledge; 2010; Pb £14.95 Reviewed by Jenna Condie who is a postgraduate researcher at the University of Salford

biology may also play a small role opens up all sorts of lines of inquiry (e.g. into the effects of prenatal hormones and genes). Autism runs in families and many genes have been implicated, and it may turn out that some of these are relevant to why it is sex-linked. I have also been impressed to see consistent correlations between amniotic fetal testosterone (FT) levels and measures of social development across 10 years of follow-up studies of a cohort of typically developing children we have been tracking, whose mothers all had amniocentesis during pregnancy (BaronCohen et al., 2005). An extreme biological determinism would be equally ludicrous, since there is no doubt that social variables can amplify and interact with such biological effects. Fine is of course obliged to try to find fault with these hormone studies, challenging, for example, whether FT in the amniotic fluid reflects FT in the brain. Again she overlooks that if we could measure FT in the brain in an ethical way, we would. FT in amniotic fluid is the next best ethical option, and it seems to be showing us that FT is associated with sex differences in the mind. Ultimately, for me, the biggest weakness of Fine’s neurosexism allegation is the mistaken blurring of science with politics. Her book reads as a polemic about the implicit political bias underlying the science of sex differences. However, this ignores that you can be a scientist interested in the nature of sex differences while being a clear supporter of equal opportunities and a firm opponent of all forms of discrimination in society. One endeavour need have nothing to do with the other. Fusing science with politics is, in my view, unfounded. I Icon Books; 2010; Hb £14.99 Reviewed by Simon Baron-Cohen who is at the Autism Research Centre, University of Cambridge 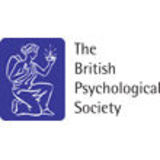 This is a preview of the November edition of The Psychologist, published by the British Psychological Society. To download the whole issue o...

This is a preview of the November edition of The Psychologist, published by the British Psychological Society. To download the whole issue o...