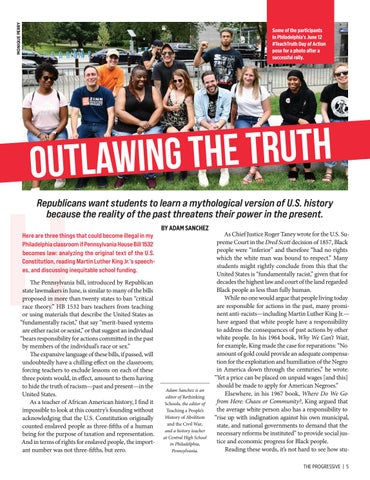 Some of the participants in Philadelphia’s June 12 #TeachTruth Day of Action pose for a photo after a successful rally.

h t u r T e h t g Outlawin Republicans want students to learn a mythological version of U.S. history because the reality of the past threatens their power in the present. Here are three things that could become illegal in my Philadelphia classroom if Pennsylvania House Bill 1532 becomes law: analyzing the original text of the U.S. Constitution, reading Martin Luther King Jr.’s speeches, and discussing inequitable school funding. The Pennsylvania bill, introduced by Republican state lawmakers in June, is similar to many of the bills proposed in more than twenty states to ban “critical race theory.” HB 1532 bars teachers from teaching or using materials that describe the United States as “fundamentally racist,” that say “merit-based systems are either racist or sexist,” or that suggest an individual “bears responsibility for actions committed in the past by members of the individual’s race or sex.” The expansive language of these bills, if passed, will undoubtedly have a chilling effect on the classroom; forcing teachers to exclude lessons on each of these three points would, in effect, amount to them having to hide the truth of racism—past and present—in the United States. As a teacher of African American history, I find it impossible to look at this country’s founding without acknowledging that the U.S. Constitution originally counted enslaved people as three-fifths of a human being for the purpose of taxation and representation. And in terms of rights for enslaved people, the important number was not three-fifths, but zero.

Adam Sanchez is an editor of Rethinking Schools, the editor of Teaching a People’s History of Abolition and the Civil War, and a history teacher at Central High School in Philadelphia, Pennsylvania.

As Chief Justice Roger Taney wrote for the U.S. Supreme Court in the Dred Scott decision of 1857, Black people were “inferior” and therefore “had no rights which the white man was bound to respect.” Many students might rightly conclude from this that the United States is “fundamentally racist,” given that for decades the highest law and court of the land regarded Black people as less than fully human. While no one would argue that people living today are responsible for actions in the past, many prominent anti-racists—including Martin Luther King Jr.— have argued that white people have a responsibility to address the consequences of past actions by other white people. In his 1964 book, Why We Can’t Wait, for example, King made the case for reparations: “No amount of gold could provide an adequate compensation for the exploitation and humiliation of the Negro in America down through the centuries,” he wrote. “Yet a price can be placed on unpaid wages [and this] should be made to apply for American Negroes.” Elsewhere, in his 1967 book, Where Do We Go from Here: Chaos or Community?, King argued that the average white person also has a responsibility to “rise up with indignation against his own municipal, state, and national governments to demand that the necessary reforms be instituted” to provide social justice and economic progress for Black people. Reading these words, it’s not hard to see how stuTHE PROGRESSIVE | 5 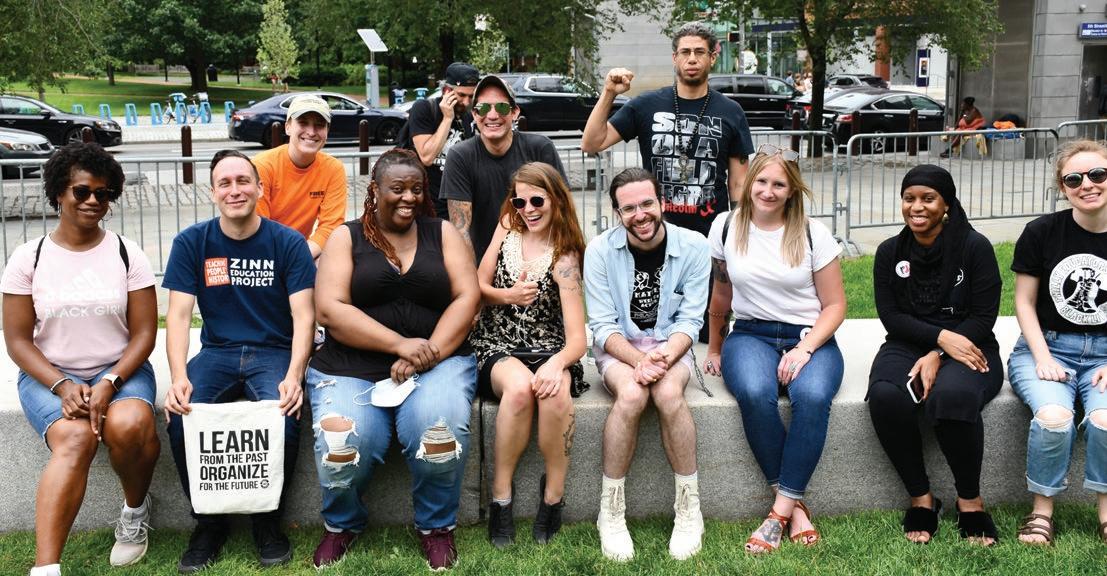 Republicans want students to learn a mythological version of U.S. history because the reality of the past threatens their power in the present. ########## Adam Sanchez 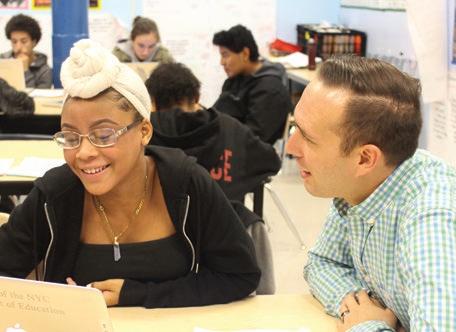 What Schools in Minneapolis Are Teaching About Race

Refusing to Lie, Regardless of the Law ########## The Zinn Education Project

BLAST FROM THE PAST 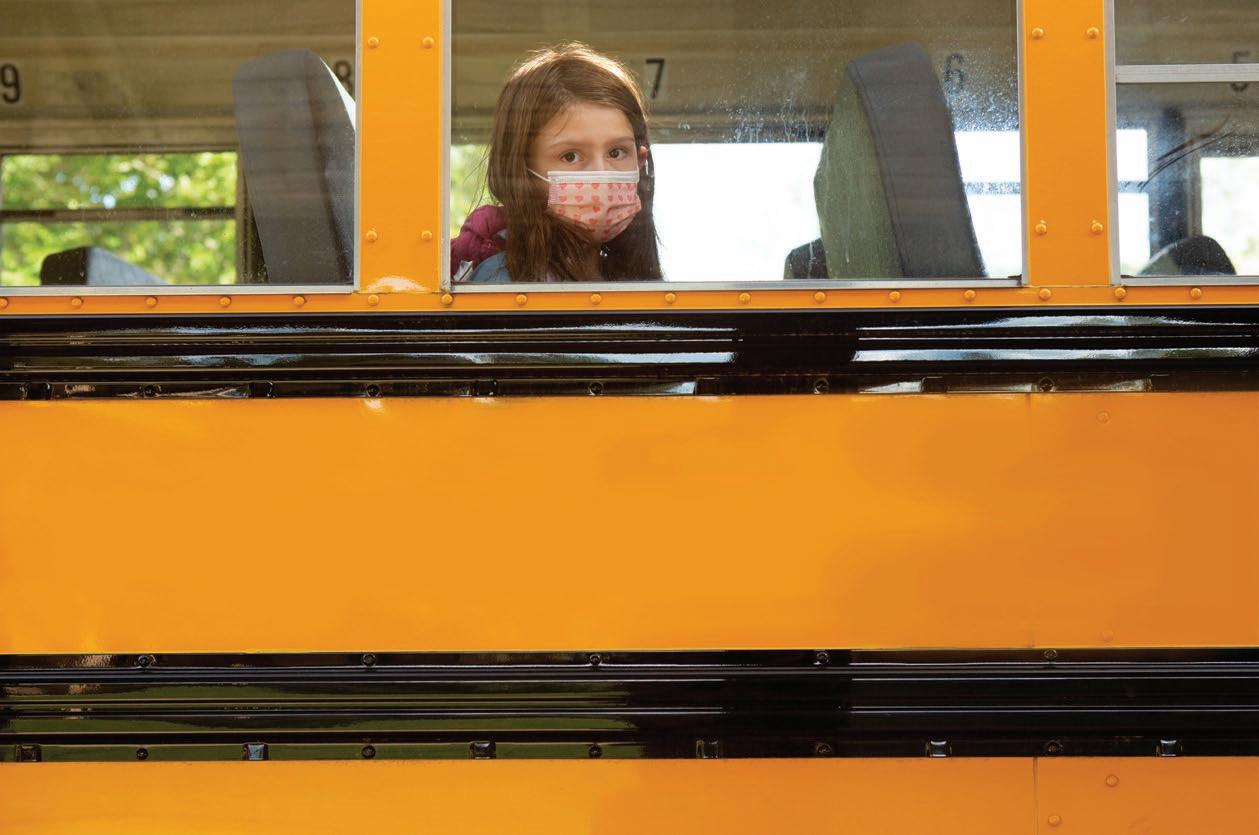 Educators are bracing for an uncertain fall semester. ########## Peter Greene 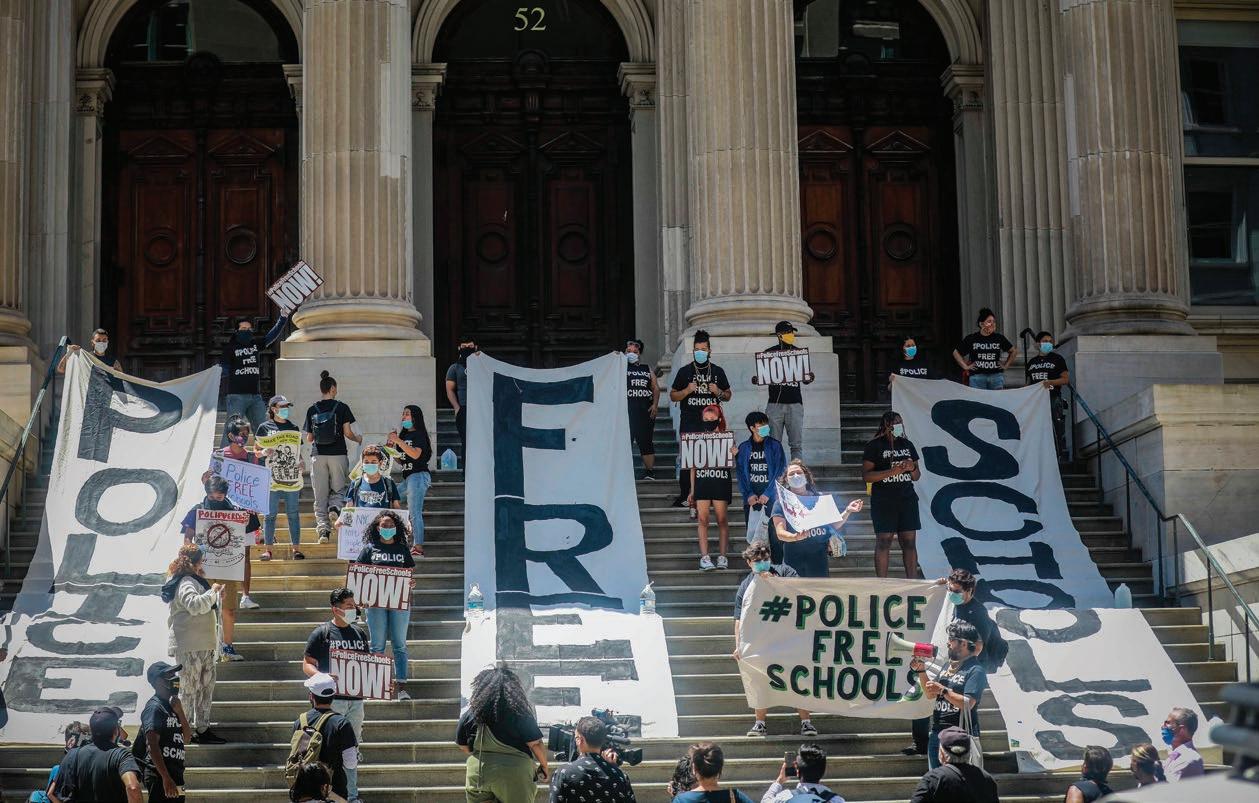 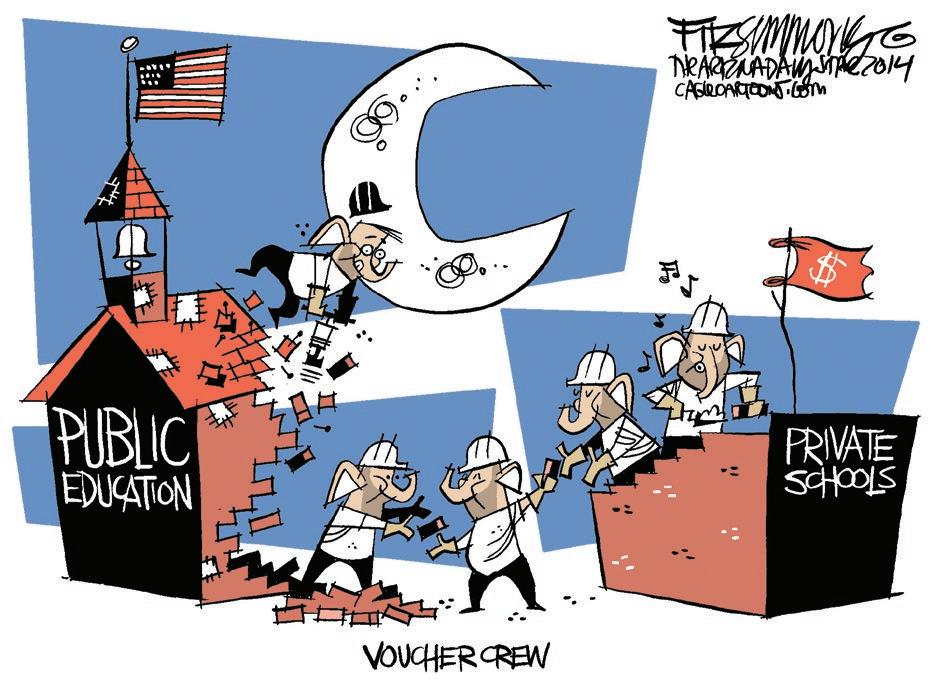 The Problem with Private School Vouchers

Harmful programs that redirect funds from public schools to private institutions are spreading rapidly across the country. ########## Jessica Levin

Welcome to Refugee High ########## A new book gives a portrait of students’ lives at one of Chicago’s most diverse high schools during Trump’s anti-immigrant campaign. ########## Elly Fishman

The Fight for School Equity

What we need is not to return to “normal,” but to shape progressive education policies to take marginalized students into account. ########## Jitu Brown and Beth Glenn 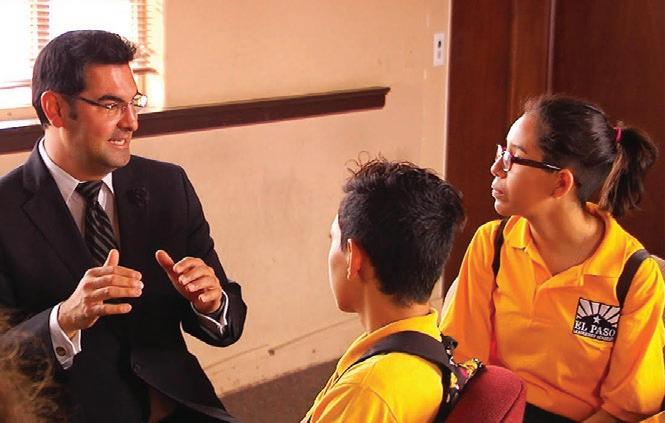 Make Schools a Catalyst for Change

Q: How Can Public Schools Emerge from the Pandemic Better Than Before? ########## Diane Ravitch, Michèle Foster, and Carol Burris