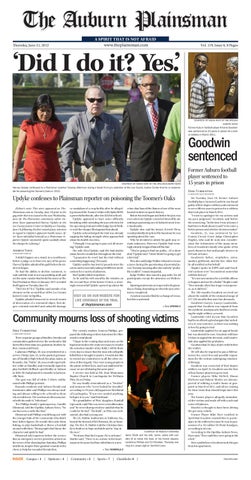 A SPIRIT THAT IS NOT AFRAID www.theplainsman.com

COURTESY OF VASHA HUNT OF THE OPELIKA AUBURN NEWS

Former Auburn football player Antonio Goodwin was sentenced to 15 years in prison for a trailer robbery in March 2011.

Goodwin sentenced COURTESY OF VASHA HUNT OF THE OPELIKA-AUBURN NEWS

Harvey Updyke confessed to a Plainsman reporter Tuesday afternoon during a break from jury selection at the Lee County Justice Center that he is responsible for poisoning the Toomer’s Oaks in 2010.

Updyke confesses to Plainsman reporter on poisoning the Toomer’s Oaks (Editor’s note: This story appeared on ThePlainsman.com on Tuesday, June 19, prior to the gag order that was issued in the case Wednesday, June 20. The Plainsman community editor Andrew Yawn approached Harvey Updyke at the Lee County Justice Center in Opelika on Tuesday, June 19, following the first round of jury selection in regard to Updyke’s apparent health issues. After Yawn identified himself as a Plainsman reporter, Updyke voluntarily spoke candidly about the charges he is facing.)

It didn’t happen on a stand, in a courthouse, before a judge or in front of a jury of his peers: Harvey Updyke admitted his guilt before the trial even began. He had the ability to decline comment, to wait until the trial, to not say anything at all, and yet the same candor that broke his story on The Paul Finebaum Show in January 2011 revealed itself again on Tuesday, June 19. “Did I do it? Yes,” Updyke said outside of an elevator on the second floor of the Lee County Justice Center in Opelika. Updyke pleaded innocent to several counts of desecration of a venerated object, first-degree criminal mischief and unlawful damage

or vandalism of a crop facility after he allegedly poisoned the Toomer’s Oaks with Spike 80DF, a powerful herbicide, after the 2010 Iron Bowl. Updyke appeared to have some difficulty breathing while attending the jury selection for his upcoming trial and while Judge Jacob Walker read the charges filed against him aloud. Updyke acknowledged the trial was already sapping his fading strength when approached about his health concerns. “I thought I was going to pass out all morning,” Updyke said. His wife, Elva Updyke, said she had doubts about how he would fare throughout the trial. “I guarantee he won’t last the trial without something happening,” Elva said. Updyke said he has lost 62 pounds since his arrest and is currently taking 18 different medications for a variety of ailments. But Updyke didn’t stop there. As he and his wife stood by the window on the second floor of the Justice Center, a seemingly remorseful Updyke opened up about the

VISIT US ON OUR WEBSITE FOR LIVE COVERAGE OF THE TRIAL at theplainsman.com

crime that fanned the flames of one of the most heated rivalries in sports history. Before his trial began and before his jury was even selected, Updyke convicted himself by admitting to poisoning one of Auburn’s most iconic landmarks. Updyke also said his lawyer, Everett Wess, would probably drop him if he found out he was speaking about the case. Why he decided to admit his guilt may remain unknown. However, Updyke had seemingly already resigned himself his fate. “They’re going to find me guilty… it’s a done deal,” Updyke said. “I don’t think I’m going to get a fair trial.” Elva also said Judge Walker refused to excuse a juror during the questioning of potential jurors Tuesday morning after she said she “probably couldn’t” remain impartial. Judge Walker also issued a gag order for all participants except the attorneys on Wednesday. Opening statements are expected to begin today or Friday, depending on when the jury selection is completed. A motion was also filed for a change of venue, but this was denied.

Three separate groups of families, friends and communities gathered over the weekend to bid farewell to their slain son, grandson, brother, father, cousin and friend. Ladarious Phillips, 20, was remembered at a service Friday, June 15, in the packed gymnasium of Handley High School, his alma mater, in Roanoke, Ala. “DaDa”, 20, was a multi-sport athlete while at Handley and eventually signed to play football ( fullback specifically) at Auburn in 2010. He had planned to transfer to Jacksonville State. The gym was full of white T-shirts emblazoned with Phillips’ portrait. Roanoke residents and Auburn friends and teammates alike said Phillips was always smiling and always willing to be a friend to those who needed one. The word most often associated with his smile is “infectious”. The Phillips family’s spokesperson, Camille Olmstead, told the Opelika-Auburn News, “No one has seen a smile like that.” Olmstead said Phillips would hang out with the younger kids of the community who didn’t have father figures. He would often take them fishing, to play basketball or throw a football around with them. “Most people don’t know the character and spirit he had.” Olmstead told reporters before the service that as emergency service providers arrived on the scene of the shooting last Saturday, Phillips told them, despite three gunshot wounds to his chest, to help his wounded friends first.

The victim’s mother, Jemicia Phillips, prepared the following written statement for Olmstead to read aloud: “I hope in the coming days and years, as the legal system does the work necessary to resolve the senseless murder of my child, I will be there every day to ensure that the man who allegedly killed him is brought to justice. I would also like to extend my condolences to all the other victims of this tragedy. They were young people in the prime of their lives, and I am saddened because we are all sharing the same pain.” A service was held at Mt. Zion Missionary Baptist Church in Loachapoka for DeMario Pitts, 20, on Friday. He was fondly remembered as a “brother” and someone who “never looked for (trouble)” according to 19-year-old Jaquavious Strickland of Loachapoka. “If you ever needed anything, he’d give it to you,” said Strickland. The grandfather of Pitts’ daughter, Randall Lipscomb, said Pitts was never a troublemaker, and “he never disrespected me and did what he could for his kid.” “Da-Kidd”, as Pitts was nicknamed, also had a young son. The J.E. Mathis Auditorium in Valdosta, Ga., hosted the funeral of Ed Christian, 20, on Saturday. The Rev. H. Mathis told the Christian family to hold on to hope and faith and to “stay in COURTESY OF REBECCA CROOMES the race.” “We know that (he) is gone. He is at home,” Gene Chizik and his wife, Jonna, stand with canMathis said. “There is no sorrow in his heart dles lit to honor the lives of his former players, anymore because God has called him to a new Ladarious Phillips and Ed Christian, Thursday evening at a prayer vigil on Samford Lawn.

On Tuesday, June 19, former Auburn football player Antonio Goodwin was found guilty of first-degree robbery and sentenced to serve fifteen years in prison for a robbery that took place in March 2011. “I want to apologize for my actions and my poor judgment,” Goodwin said before the sentencing. “In the time I was at home, I had time to think about it and I’ve become a better person and a better decision-maker.” Goodwin, 21, was sentenced by Lee County Circuit Court Judge Christopher Hughes, who said he took into consideration the testimonies of the many members of Goodwin’s family who spoke of his good character, but said people deserve to feel safe at home. Goodwin’s father, stepfather, sister, mother, girlfriend, and the Rev. Allen Hollie all testified on his behalf. Hughes spoke to ESPN and said Goodwin’s actions were “inconsistent somewhat with his history.” “It is not uncommon for a terrible offense to happen and not be a habit,” Hughes said. “One mistake often has tragic consequences, as it did here.” The 180 months Goodwin received are about the middle of the estimated range of 117-255 months that state law demands. Goodwin’s lawyer, Lauryn Lauderdale, argued that Goodwin was impaired from the synthetic marijuana he had been smoking the night robbery occured. Lauderdale told al.com that Goodwin had been offered a plea bargain that included a 21-year sentence, so there was nothing to lose by going to trial Lauderdale applied for an appeal bond, but was denied for now. Goodwin will have 43 days to appeal the decision, and Lauderdale also applied for probation. Goodwin had 21 days of jail credit before the verdict. He will also be required to pay a $500 attorney fee, court fees and possible reparations for the victims undergoing emotional therapy. Goodwin was convicted of first-degree robbery on April 13. Goodwin was the first of four former players to go to trial. Former players Mike McNeil, Shaun Kitchens and Dakota Mosley are alsosuspected of robbing a trailer home at gunpoint in March of 2011, and all are waiting for their trials that should begin later this year. The former players allegedly intimidated the victims and made off with a safe and some cell phones. Moseley is thought to have been driving the get-away vehicle. Former Player Mike Dyer testified in April that Goodwin wanted him to participate in the robbery because he was in possession of a .45-caliber Hi-Point handgun, according to al.com According to the Opelika-Auburn News, Dyer said, “They said they were going to hit a lick.” Dyer said believes Goodwin took the gun from his apartment. 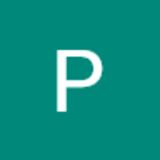