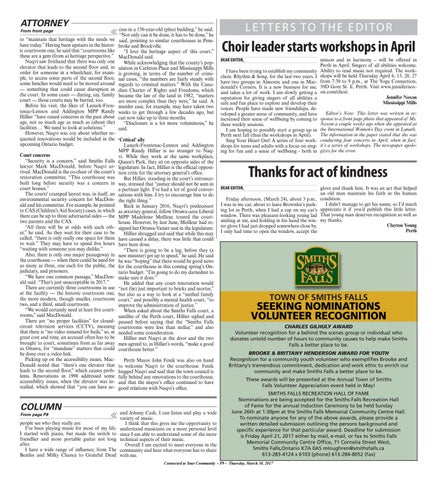 cess in a 150-year-old (plus) building,” he said. “Not only can it be done, it has to be done,” he said, pointing to similar courthouses in Pembroke and Brockville. “I love the heritage aspect of this court,” MacDonald said. While acknowledging that the county’s population in Carleton Place and Mississippi Mills is growing, in terms of the number of criminal cases, “the numbers are fairly steady with regards to criminal matters.” With the Canadian Charter of Rights and Freedoms, which became the law of the land in 1982, “matters are more complex than they were,” he said. A murder case, for example, may have taken two weeks to get through a few decades ago, but can now take up to three months. “Disclosure is a lot more voluminous,” he said.

to “maintain that heritage with the needs we have today.” Having been upstairs in the historic courtroom one, he said that “courtrooms like these are a gem (from a) heritage perspective.” Naqvi saw firsthand that there was only one elevator that leads to the second floor and, in order for someone in a wheelchair, for example, to access some parts of the second floor, some benches would need to be moved around — something that could cause disruption in the court. In some cases — during, say, family court — those courts may be barred, too. Before his visit, the likes of Lanark-Frontenac-Lennox and Addington MPP Randy Hillier “have raised concerns in the past about age, not so much age as much as (about the) facilities … We need to look at solutions.” However, Naqvi was coy about whether requested renovations would be included in the ‘Critical’ ally upcoming Ontario budget. Lanark-Frontenac-Lennox and Addington MPP Randy Hillier is no stranger to NaqCourt concerns vi. While they work at the same workplace, “Security is a concern,” said Smiths Falls Queen’s Park, they sit on opposite sides of the lawyer Mark MacDonald, before Naqvi ar- legislature. In fact, Hillier is the official opposirived. MacDonald is the co-chair of the court’s tion critic for the attorney general’s office. restoration committee. “This courthouse was But Hillier, standing in the court’s entrancebuilt long before security was a concern in way, stressed that “justice should not be seen in court houses.” a partisan light. I’ve had a lot of good converThe courts' cramped layout was, in itself, an sations with him. I try to encourage him to do environmental security concern for MacDon- the right thing.” ald and his committee. For example, he pointed Back in January 2016, Naqvi’s predecessor to CAS (Children’s Aid Society) cases, in which as attorney general, fellow Ottawa-area Liberal there can be up to three adversarial sides — the MPP Madeleine Meilleur, toured the courttwo parents and the CAS. house. However, by last June, Meilleur had re“All three will be at odds with each oth- signed her Ottawa-Vanier seat in the legislature. er,” he said. As they wait for their case to be Hillier shrugged and said that while this may called, “there is only really one space for them have caused a delay, there was little that could to wait.” They may have to spend five hours have been done. “waiting with someone you may dislike.” “There is going to be a lag, before they (a Also, there is only one major passageway in new minister) get up to speed,” he said. He said the courthouse — when there could be need for he was “hoping” that there would be good news as many as three, one each for the public, the for the courthouse in this coming spring’s Onjudiciary, and prisoners. tario budget. “I’m going to do my darnedest to “We have one common passage,” MacDon- make sure it does.” ald said. “That’s just unacceptable in 2017.” He added that any court renovation would There are currently three courtrooms in use “not (be) just important to bricks and mortar,” at the facility — the historic courtroom one, but also as a way to look at a “unified family the more modern, though smaller, courtroom court,” and possibly a mental health court, “to two, and a third, small courtroom. improve the administration of justice.” “We would certainly need at least five courtWhen asked about the Smiths Falls court, a rooms,” said MacDonald. satellite of the Perth court, Hillier sighed and There are “no proper facilities” for closed- paused before saying that the “Smiths Falls circuit television services (CCTV), meaning courtrooms were less than stellar,” and also that there is “no video remand for bails,” so, at needed some consideration. great cost and time, an accused often has to be Hillier met Naqvi at the door and the two brought to court, sometimes from as far away men agreed to, in Hillier’s words, “make a good as Ottawa, for “mundane” matters that could courthouse better.” be done over a video link. Picking up on the accessibility issues, MacPerth Mayor John Fenik was also on hand Donald noted that “there’s one elevator that to welcome Naqvi to the courthouse. Fenik leads to the second floor,” which causes prob- hugged Naqvi and said that the town council is lems. Renovations in 1998 addressed some fully behind any renovations to the courthouse, accessibility issues, when the elevator was in- and that the mayor’s office continued to have stalled, which showed that “you can have ac- good relations with Naqvi’s office.

people see who they really are. I’ve been playing music for most of my life. I started with piano, but made the switch to friendlier and more portable guitar not long after. I have a wide range of influence, from The Beatles and Milky Chance to Grateful Dead

and Johnny Cash, I can listen and play a wide variety of music. I think that this gives me the opportunity to understand musicians on a more personal level since I am able to understand some of the more technical aspects of their music. Overall I am excited to meet everyone in the community and hear what everyone has to share with me.

LE T TERS TO THE EDITOR

I have been trying to establish my community choir, Rhythm & Song, for the last two years. I have two groups in Almonte and one in Macdonald’s Corners. It is a new business for me, and takes a lot of work. I am slowly getting a reputation for giving singers of all abilities a safe and fun place to explore and develop their voices. People have made new friendships, developed a greater sense of community, and have increased their sense of wellbeing by coming to these weekly sessions.  I am hoping to possibly start a group up in Perth next fall (thus the workshops in April). Sing Your Heart Out! A series of four workshops for teens and adults with a focus on singing for fun and a sense of wellbeing - both in

unison and in harmony – will be offered in Perth in April. Singers of all abilities welcome. Ability to read music not required. The workshops will be held Thursday April 6, 13, 20, 27 from 7:30 to 9 p.m., at The Yoga Connection, 39D Gore St. E. Perth. Visit www.jennifernoxon.com/choir. Jennifer Noxon Mississippi Mills Editor’s Note: This letter was written in response to a front page photo that appeared of Ms. Noxon a couple weeks ago when she appeared at the International Women’s Day event in Lanark. The information in the paper stated that she was conducting four concerts in April, when in fact, it’s a series of workshops. The newspaper apologizes for the error.

Thanks for act of kindness DEAR EDITOR,

Friday afternoon, (March 24), about 3 p.m., I was in my car, about to leave Brownlee’s parking lot in Perth, when I had a rap on my car’s window. There was pleasant-looking young lad smiling at me, and holding in his hand the winter glove I had just dropped somewhere close by. I only had time to open the window, accept the

glove and thank him. It was an act that helped an old man maintain his faith in the human condition. I didn’t manage to get his name, so I’d much appreciate it if you’d publish this little letter. That young man deserves recognition as well as my thanks. Clayton Young Perth

SEEKING NOMINATIONS VOLUNTEER RECOGNITION CHARLES GILHULY AWARD Volunteer recognition for a behind the scenes group or individual who donates untold number of hours to community causes to help make Smiths Falls a better place to be. BROOKE & BRITTANY HENDERSON AWARD FOR YOUTH Recognition for a community youth volunteer who exemplifies Brooke and Brittany’s tremendous commitment, dedication and work ethic to enrich our community and make Smiths Falls a better place to be. These awards will be presented at the Annual Town of Smiths Falls Volunteer Appreciation event held in May! SMITHS FALLS RECREATION HALL OF FAME Nominations are being accepted for the Smiths Falls Recreation Hall of Fame for the annual Induction Ceremony to be held Sunday June 26th at 1:30pm at the Smiths Falls Memorial Community Centre Hall. To nominate anyone for any of the above awards, please provide a written detailed submission outlining the persons background and specific experience for that particular award. Deadline for submission is Friday April 21, 2017 either by mail, e-mail, or fax to Smiths Falls Memorial Community Centre Office, 71 Cornelia Street West, Smiths Falls,Ontario K7A 0A5 mloughren@smithsfalls.ca 613-283-4124 x 6103 (phone) 613-284-8052 (fax)