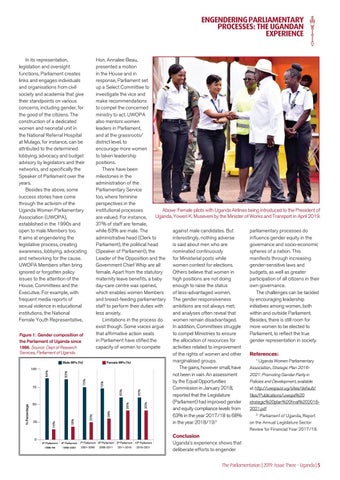 ENGENDERING PARLIAMENTARY PROCESSES: THE UGANDAN EXPERIENCE In its representation, legislation and oversight functions, Parliament creates links and engages individuals and organisations from civil society and academia that give their standpoints on various concerns, including gender, for the good of the citizens. The construction of a dedicated women and neonatal unit in the National Referral Hospital at Mulago, for instance, can be attributed to the determined lobbying, advocacy and budget advisory by legislators and their networks, and specifically the Speaker of Parliament over the years. Besides the above, some success stories have come through the activism of the Uganda Women Parliamentary Association (UWOPA), established in the 1990s and open to male Members too. It aims at engendering the legislative process, creating awareness, lobbying, advocating and networking for the cause. UWOPA Members often bring ignored or forgotten policy issues to the attention of the House, Committees and the Executive. For example, with frequent media reports of sexual violence in educational institutions, the National Female Youth Representative, Figure 1: Gender composition of the Parliament of Uganda since 1986. Source: Dept of Research Services, Parliament of Uganda.

Hon. Annalee Beau, presented a motion in the House and in response, Parliament set up a Select Committee to investigate the vice and make recommendations to compel the concerned ministry to act. UWOPA also mentors women leaders in Parliament, and at the grassroots/ district level, to encourage more women to taken leadership positions. There have been milestones in the administration of the Parliamentary Service too, where feminine perspectives in the Above: Female pilots with Uganda Airlines being introduced to the President of institutional processes Uganda, Yoweri K. Museveni by the Minister of Works and Transport in April 2019. are valued. For instance, 37% of staff are female, while 63% are male. The against male candidates. But parliamentary processes do administrative head (Clerk to interestingly, nothing adverse influence gender equity in the Parliament), the political head is said about men who are governance and socio-economic (Speaker of Parliament), the nominated continuously spheres of a nation. This Leader of the Opposition and the for Ministerial posts while manifests through increasing Government Chief Whip are all women contest for elections. gender-sensitive laws and female. Apart from the statutory Others believe that women in budgets, as well as greater maternity leave benefits, a baby high positions are not doing participation of all citizens in their day-care centre was opened, enough to raise the status own governance. which enables women Members of less-advantaged women. The challenges can be tackled and breast-feeding parliamentary The gender responsiveness by encouraging leadership staff to perform their duties with ambitions are not always met; initiatives among women, both less anxiety. and analyses often reveal that within and outside Parliament. Limitations in the process do women remain disadvantaged. Besides, there is still room for exist though. Some voices argue In addition, Committees struggle more women to be elected to that affirmative action seats to compel Ministries to ensure Parliament, to reflect the true in Parliament have stifled the the allocation of resources for gender representation in society. capacity of women to compete activities related to improvement of the rights of women and other References: 1 marginalised groups. Uganda Women Parliamentary Female MPs (%) The gains, however small, have Association, Strategic Plan 2016not been in vain. An assessment 2021: Promoting Gender Parity in by the Equal Opportunities Policies and Development, available Commission in January 2018, at: http://uwopa.or.ug/sites/default/ reported that the Legislature files/Publications/uwopa%20 (Parliament) had improved gender strategic%20plan%20final%202016and equity compliance levels from 2021.pdf 2 63% in the year 2017/18 to 68% Parliament of Uganda, Report 2 in the year 2018/19. on the Annual Legislature Sector Review for Financial Year 2017/18.