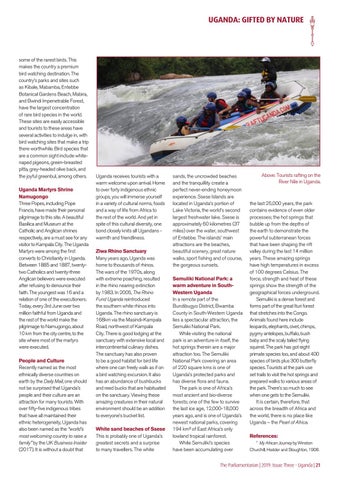 some of the rarest birds. This makes the country a premium bird watching destination. The country’s parks and sites such as Kibale, Mabamba, Entebbe Botanical Gardens Beach, Mabira, and Bwindi Impenetrable Forest, have the largest concentration of rare bird species in the world. These sites are easily accessible and tourists to these areas have several activities to indulge in, with bird watching sites that make a trip there worthwhile. Bird species that are a common sight include whitenaped pigeons, green-breasted pitta, grey-headed olive back, and the joyful greenbul, among others. Uganda Martyrs Shrine Namugongo Three Popes, including Pope Francis, have made their personal pilgrimage to this site. A beautiful Basilica and Museum at the Catholic and Anglican shrines respectively, are a must see for any visitor to Kampala City. The Uganda Martyrs were among the first converts to Christianity in Uganda. Between 1885 and 1887, twentytwo Catholics and twenty-three Anglican believers were executed after refusing to denounce their faith. The youngest was 16 and a relation of one of the executioners. Today, every 3rd June over two million faithful from Uganda and the rest of the world make the pilgrimage to Namugongo, about 10 km from the city centre, to the site where most of the martyrs were executed. People and Culture Recently named as the most ethnically diverse countries on earth by the Daily Mail, one should not be surprised that Uganda’s people and their culture are an attraction for many tourists. With over fifty-five indigenous tribes that have all maintained their ethnic heterogeneity, Uganda has also been named as the “world’s most welcoming country to raise a family” by the UK Business Insider (2017). It is without a doubt that

Uganda receives tourists with a warm welcome upon arrival. Home to over forty indigenous ethnic groups, you will immerse yourself in a variety of cultural norms, foods and a way of life from Africa to the rest of the world. And yet in spite of this cultural diversity, one bond closely knits all Ugandans warmth and friendliness. Ziwa Rhino Sanctuary Many years ago, Uganda was home to thousands of rhinos. The wars of the 1970s, along with extreme poaching, resulted in the rhino nearing extinction by 1983. In 2005, The Rhino Fund Uganda reintroduced the southern white rhinos into Uganda. The rhino sanctuary is 168km via the Masindi-Kampala Road, northwest of Kampala City. There is good lodging at the sanctuary with extensive local and intercontinental culinary dishes. The sanctuary has also proven to be a good habitat for bird life where one can freely walk as if on a bird watching excursion. It also has an abundance of bushbucks and reed bucks that are habituated on the sanctuary. Viewing these amazing creatures in their natural environment should be an addition to everyone’s bucket list. White sand beaches of Ssese This is probably one of Uganda’s greatest secrets and a surprise to many travellers. The white

sands, the uncrowded beaches and the tranquillity create a perfect never-ending honeymoon experience. Ssese Islands are located in Uganda’s portion of Lake Victoria, the world’s second largest freshwater lake. Ssese is approximately 60 kilometres (37 miles) over the water, southwest of Entebbe. The islands’ main attractions are the beaches, beautiful scenery, great nature walks, sport fishing and of course, the gorgeous sunsets. Semuliki National Park: a warm adventure in SouthWestern Uganda In a remote part of the Bundibugyo District, Bwamba County in South-Western Uganda lies a spectacular attraction, the Semuliki National Park. While visiting the national park is an adventure in itself, the hot springs therein are a major attraction too. The Semuliki National Park covering an area of 220 square kms is one of Uganda’s protected parks and has diverse flora and fauna. The park is one of Africa’s most ancient and bio-diverse forests; one of the few to survive the last ice age, 12,000-18,000 years ago, and is one of Uganda’s newest national parks, covering 194 km² of East Africa’s only lowland tropical rainforest. While Semuliki’s species have been accumulating over

Above: Tourists rafting on the River Nile in Uganda.

the last 25,000 years, the park contains evidence of even older processes; the hot springs that bubble up from the depths of the earth to demonstrate the powerful subterranean forces that have been shaping the rift valley during the last 14 million years. These amazing springs have high temperatures in excess of 100 degrees Celsius. The force, strength and heat of these springs show the strength of the geographical forces underground. Semuliki is a dense forest and forms part of the great Ituri forest that stretches into the Congo. Animals found here include leopards, elephants, civet, chimps, pygmy antelopes, buffalo, bush baby and the scaly tailed flying squirrel. The park has got eight primate species too, and about 400 species of birds plus 300 butterfly species. Tourists at the park use set trails to visit the hot springs and prepared walks to various areas of the park. There’s so much to see when one gets to the Semuliki. It is certain, therefore, that across the breadth of Africa and the world, there is no place like Uganda – the Pearl of Africa. References: My African Journey by Winston Churchill, Hodder and Stoughton, 1908. 1