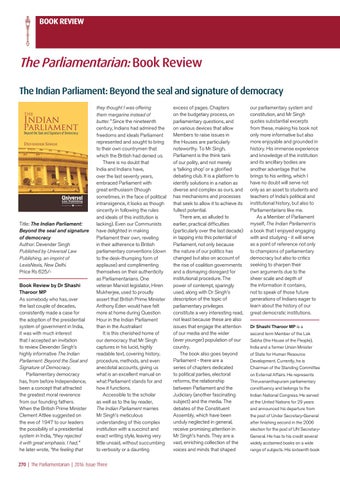 The Parliamentarian: Book Review The Indian Parliament: Beyond the seal and signature of democracy

Title: The Indian Parliament: Beyond the seal and signature of democracy Author: Devender Singh Published by Universal Law Publishing, an imprint of LexisNexis, New Delhi. Price Rs 625/Book Review by Dr Shashi Tharoor MP As somebody who has, over the last couple of decades, consistently made a case for the adoption of the presidential system of government in India, it was with much interest that I accepted an invitation to review Devender Singh’s highly informative The Indian Parliament: Beyond the Seal and Signature of Democracy. Parliamentary democracy has, from before Independence, been a concept that attracted the greatest moral reverence from our founding fathers. When the British Prime Minister Clement Attlee suggested on the eve of 1947 to our leaders the possibility of a presidential system in India, “they rejected it with great emphasis. I had,” he later wrote, “the feeling that

they thought I was offering them margarine instead of butter.” Since the nineteenth century, Indians had admired the freedoms and ideals Parliament represented and sought to bring to their own countrymen that which the British had denied us. There is no doubt that India and Indians have, over the last seventy years, embraced Parliament with great enthusiasm (though sometimes, in the face of political intransigence, it looks as though sincerity in following the rules and ideals of this institution is lacking). Even our Communists have delighted in making Parliament their own, reveling in their adherence to British parliamentary conventions (down to the desk-thumping form of applause) and complimenting themselves on their authenticity as Parliamentarians. One veteran Marxist legislator, Hiren Mukherjee, used to proudly assert that British Prime Minister Anthony Eden would have felt more at home during Question Hour in the Indian Parliament than in the Australian! It is this cherished home of our democracy that Mr Singh captures in his lucid, highly readable text, covering history, procedure, methods, and even anecdotal accounts, giving us what is an excellent manual on what Parliament stands for and how it functions. Accessible to the scholar as well as to the lay reader, The Indian Parliament marries Mr Singh’s meticulous understanding of this complex institution with a succinct and exact writing style, leaving very little unsaid, without succumbing to verbosity or a daunting

excess of pages. Chapters on the budgetary process, on parliamentary questions, and on various devices that allow Members to raise issues in the Houses are particularly noteworthy. To Mr Singh, Parliament is the think tank of our polity, and not merely a ‘talking shop’ or a glorified debating club. It is a platform to identify solutions in a nation as diverse and complex as ours, and has mechanisms and processes that seek to allow it to achieve its fullest potential. There are, as alluded to earlier, practical difficulties (particularly over the last decade) in tapping into this potential of Parliament, not only because the nature of our politics has changed but also on account of the rise of coalition governments and a dismaying disregard for institutional procedure. The power of contempt, sparingly used, along with Dr Singh’s description of the topic of parliamentary privileges constitute a very interesting read, not least because these are also issues that engage the attention of our media and the wider (ever younger) population of our country. The book also goes beyond Parliament - there are a series of chapters dedicated to political parties, electoral reforms, the relationship between Parliament and the Judiciary (another fascinating subject) and the media. The debates of the Constituent Assembly, which have been unduly neglected in general, receive promising attention in Mr Singh’s hands. They are a vast, enriching collection of the voices and minds that shaped

our parliamentary system and constitution, and Mr Singh quotes substantial excerpts from these, making his book not only more informative but also more enjoyable and grounded in history. His immense experience and knowledge of the institution and its ancillary bodies are another advantage that he brings to his writing, which I have no doubt will serve not only as an asset to students and teachers of India’s political and institutional history, but also to Parliamentarians like me. As a Member of Parliament myself, The Indian Parliament is a book that I enjoyed engaging with and studying - it will serve as a point of reference not only to champions of parliamentary democracy but also to critics seeking to sharpen their own arguments due to the sheer scale and depth of the information it contains, not to speak of those future generations of Indians eager to learn about the history of our great democratic institutions. Dr Shashi Tharoor MP is a second term Member of the Lok Sabha (the House of the People), India and a former Union Minister of State for Human Resource Development. Currently, he is Chairman of the Standing Committee on External Affairs. He represents Thiruvananthapuram parliamentary constituency and belongs to the Indian National Congress. He served at the United Nations for 29 years and announced his departure from the post of Under Secretary-General after finishing second in the 2006 election for the post of UN SecretaryGeneral. He has to his credit several widely acclaimed books on a wide range of subjects. His sixteenth book