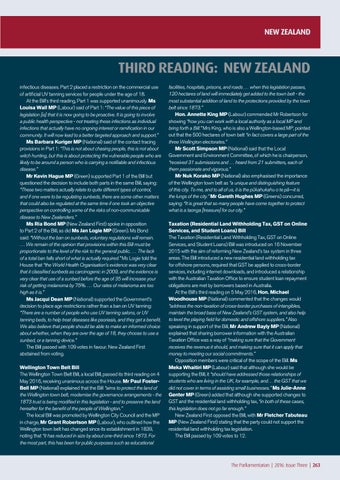 THIRD READING: new zeaLAND infectious diseases. Part 2 placed a restriction on the commercial use of artificial UV tanning services for people under the age of 18. At the Bill’s third reading, Part 1 was supported unanimously. Ms Louisa Wall MP (Labour) said of Part 1: “The value of this piece of legislation [is] that it is now going to be proactive. It is going to involve a public health perspective - not treating these infections as individual infections that actually have no ongoing interest or ramification in our community. It will now lead to a better targeted approach and support.” Ms Barbara Kuriger MP (National) said of the contact tracing provisions in Part 1: “This is not about chasing people, this is not about witch hunting, but this is about protecting the vulnerable people who are likely to be around a person who is carrying a notifiable and infectious disease.” Mr Kevin Hague MP (Green) supported Part 1 of the Bill but questioned the decision to include both parts in the same Bill, saying: “These two matters actually relate to quite different types of control, and if one were to be regulating sunbeds, there are some other matters that could also be regulated at the same time if one took an objective perspective on controlling some of the risks of non-communicable disease to New Zealanders.” Ms Ria Bond MP (New Zealand First) spoke in opposition to Part 2 of the Bill, as did Ms Jan Logie MP (Green). Ms Bond said: “Without the ban on sunbeds, voluntary regulations will remain. … We remain of the opinion that provisions within this Bill must be proportionate to the level of the risk to the general public. … The lack of a total ban falls short of what is actually required.” Ms Logie told the House that “the World Health Organisation’s evidence was very clear that it classified sunbeds as carcinogenic in 2009, and the evidence is very clear that use of a sunbed before the age of 35 will increase your risk of getting melanoma by 75%. … Our rates of melanoma are too high as it is.” Ms Jacqui Dean MP (National) supported the Government’s decision to place age restrictions rather than a ban on UV tanning: “There are a number of people who use UV tanning salons, or UV tanning beds, to help treat diseases like psoriasis, and they get a benefit. We also believe that people should be able to make an informed choice about whether, when they are over the age of 18, they choose to use a sunbed, or a tanning device.” The Bill passed with 109 votes in favour. New Zealand First abstained from voting. Wellington Town Belt Bill The Wellington Town Belt Bill, a local Bill, passed its third reading on 4 May 2016, receiving unanimous across the House. Mr Paul FosterBell MP (National) explained that the Bill “aims to protect the land of the Wellington town belt, modernise the governance arrangements - the 1873 trust is being modified in this legislation - and to preserve the land hereafter for the benefit of the people of Wellington.” The local Bill was promoted by Wellington City Council and the MP in charge, Mr Grant Robertson MP (Labour), who outlined how the Wellington town belt has changed since its establishment in 1839, noting that “it has reduced in size by about one-third since 1873. For the most part, this has been for public purposes such as educational

facilities, hospitals, prisons, and roads … when this legislation passes, 120 hectares of land will immediately get added to the town belt - the most substantial addition of land to the protections provided by the town belt since 1873.” Hon. Annette King MP (Labour) commended Mr Robertson for showing “how you can work with a local authority as a local MP and bring forth a Bill.” Mrs King, who is also a Wellington-based MP, pointed out that the 500 hectares of town belt “in fact covers a large part of the three Wellington electorates.” Mr Scott Simpson MP (National) said that the Local Government and Environment Committee, of which he is chairperson, “received 31 submissions and … heard from 21 submitters, each of them passionate and vigorous.” Mr Nuk Korako MP (National) also emphasised the importance of the Wellington town belt as “a unique and distinguishing feature of this city. To me, and to all of us, it is the pūkahukahu o te pā—it is the lungs of the city.” Mr Gareth Hughes MP (Greens) concurred, saying: “It is great that so many people have come together to protect what is a taonga [treasure] for our city.” Taxation (Residential Land Withholding Tax, GST on Online Services, and Student Loans) Bill The Taxation (Residential Land Withholding Tax, GST on Online Services, and Student Loans) Bill was introduced on 16 November 2015 with the aim of reforming New Zealand’s tax system in three areas. The Bill introduced a new residential land withholding tax for offshore persons, required that GST be applied to cross-border services, including internet downloads, and introduced a relationship with the Australian Taxation Office to ensure student loan repayment obligations are met by borrowers based in Australia. At the Bill’s third reading on 5 May 2016, Hon. Michael Woodhouse MP (National) commented that the changes would “address the non-taxation of cross-border purchases of intangibles, maintain the broad base of New Zealand’s GST system, and also help to level the playing field for domestic and offshore suppliers.” Also speaking in support of the Bill, Mr Andrew Bayly MP (National) explained that sharing borrower information with the Australian Taxation Office was a way of “making sure that the Government receives the revenue it should, and making sure that it can apply that money to meeting our social commitments.” Opposition members were critical of the scope of the Bill. Ms Meka Whaitiri MP (Labour) said that although she would be supporting the Bill, it “should have addressed those relationships of students who are living in the UK, for example, and… the GST that we did not cover in terms of assisting small businesses.” Ms Julie-Anne Genter MP (Green) added that although she supported changes to GST and the residential land withholding tax, “in both of these cases, this legislation does not go far enough.” New Zealand First opposed the Bill, with Mr Fletcher Tabuteau MP (New Zealand First) stating that the party could not support the residential land withholding tax legislation. The Bill passed by 109 votes to 12.