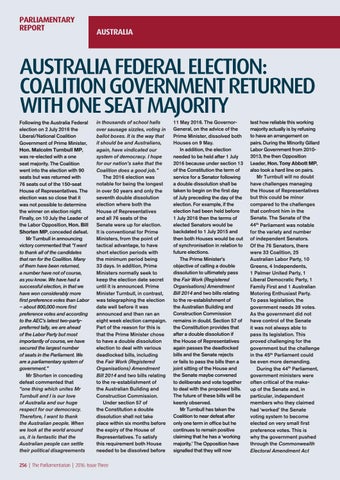 Following the Australia Federal election on 2 July 2016 the Liberal/National Coalition Government of Prime Minister, Hon. Malcolm Turnbull MP, was re-elected with a one seat majority. The Coalition went into the election with 90 seats but was returned with 76 seats out of the 150-seat House of Representatives. The election was so close that it was not possible to determine the winner on election night. Finally, on 10 July the Leader of the Labor Opposition, Hon. Bill Shorten MP, conceded defeat. Mr Turnbull in announcing victory commented that “I want to thank all of the candidates that ran for the Coalition. Many of them have been returned, a number have not of course, as you know. We have had a successful election, in that we have won considerably more first preference votes than Labor – about 800,000 more first preference votes and according to the AEC’s latest two-partypreferred tally, we are ahead of the Labor Party but most importantly of course, we have secured the largest number of seats in the Parliament. We are a parliamentary system of government.” Mr Shorten in conceding defeat commented that “one thing which unites Mr Turnbull and I is our love of Australia and our huge respect for our democracy. Therefore, I want to thank the Australian people. When we look at the world around us, it is fantastic that the Australian people can settle their political disagreements

in thousands of school halls over sausage sizzles, voting in ballot boxes. It is the way that it should be and Australians, again, have vindicated our system of democracy. I hope for our nation’s sake that the Coalition does a good job.” The 2016 election was notable for being the longest in over 50 years and only the seventh double dissolution election where both the House of Representatives and all 76 seats of the Senate were up for election. It is conventional for Prime Ministers, from the point of tactical advantage, to have short election periods with the minimum period being 33 days. In addition, Prime Ministers normally seek to keep the election date secret until it is announced. Prime Minister Turnbull, in contrast, was telegraphing the election date well before it was announced and then ran an eight week election campaign. Part of the reason for this is that the Prime Minister chose to have a double dissolution election to deal with various deadlocked bills, including the Fair Work (Registered Organisations) Amendment Bill 2014 and two bills relating to the re-establishment of the Australian Building and Construction Commission. Under section 57 of the Constitution a double dissolution shall not take place within six months before the expiry of the House of Representatives. To satisfy this requirement both House needed to be dissolved before

11 May 2016. The GovernorGeneral, on the advice of the Prime Minister, dissolved both Houses on 9 May. In addition, the election needed to be held after 1 July 2016 because under section 13 of the Constitution the term of service for a Senator following a double dissolution shall be taken to begin on the first day of July preceding the day of the election. For example, if the election had been held before 1 July 2016 then the terms of elected Senators would be backdated to 1 July 2015 and then both Houses would be out of synchronisation in relation to future elections. The Prime Minister’s objective of calling a double dissolution to ultimately pass the Fair Work (Registered Organisations) Amendment Bill 2014 and two bills relating to the re-establishment of the Australian Building and Construction Commission remains in doubt. Section 57 of the Constitution provides that after a double dissolution if the House of Representatives again passes the deadlocked bills and the Senate rejects or fails to pass the bills then a joint sitting of the House and the Senate maybe convened to deliberate and vote together to deal with the proposed bills. The future of these bills will be keenly observed. Mr Turnbull has taken the Coalition to near defeat after only one term in office but he continues to remain positive claiming that he has a ‘working majority.’ The Opposition have signalled that they will now

test how reliable this working majority actually is by refusing to have an arrangement on pairs. During the Minority Gillard Labor Government from 20102013, the then Opposition Leader, Hon. Tony Abbott MP, also took a hard line on pairs. Mr Turnbull will no doubt have challenges managing the House of Representatives but this could be minor compared to the challenges that confront him in the Senate. The Senate of the 44th Parliament was notable for the variety and number of independent Senators. Of the 76 Senators, there were 33 Coalition, 25 Australian Labor Party, 10 Greens, 4 Independents, 1 Palmer United Party, 1 Liberal Democratic Party, 1 Family First and 1 Australian Motoring Enthusiast Party. To pass legislation, the government needs 39 votes. As the government did not have control of the Senate it was not always able to pass its legislation. This proved challenging for the government but the challenge in the 45th Parliament could be even more demanding. During the 44th Parliament, government ministers were often critical of the makeup of the Senate and, in particular, independent members who they claimed had ‘worked’ the Senate voting system to become elected on very small first preference votes. This is why the government pushed through the Commonwealth Electoral Amendment Act