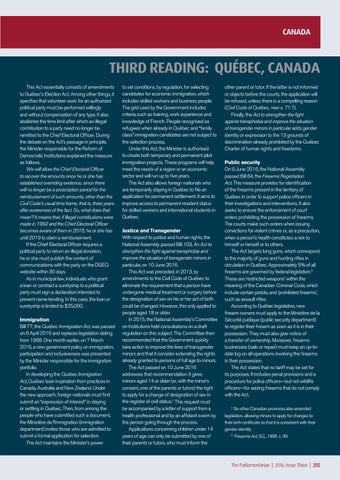 THIRD READING: QUÉBEC, Canada This Act essentially consists of amendments to Québec’s Election Act. Among other things, it specifies that volunteer work for an authorized political party must be performed willingly and without compensation of any type. It also abolishes the time limit after which an illegal contribution to a party need no longer be remitted to the Chief Electoral Officer. During the debate on the Act’s passage in principle, the Minister responsible for the Reform of Democratic Institutions explained the measure as follows. We will allow the Chief Electoral Officer to recover the amounts once he or she has established overriding evidence, since there will no longer be a prescription period for the reimbursement of such amounts, other than the Civil Code’s usual time frame, that is, three years after awareness of the fact. So, what does that mean? It means that, if illegal contributions were made in 1992 and the Chief Electoral Officer becomes aware of them in 2016, he or she has until 2019 to claim a reimbursement. If the Chief Electoral Officer requires a political party to return an illegal donation, he or she must publish the content of communications with the party on the DGEQ website within 30 days. As in municipal law, individuals who grant a loan or contract a suretyship to a political party must sign a declaration intended to prevent name-lending. In this case, the loan or suretyship is limited to $25,000. Immigration Bill 77, the Québec Immigration Act, was passed on 6 April 2016 and replaces legislation dating from 1968. One month earlier, on 7 March 2016, a new government policy on immigration, participation and inclusiveness was presented by the Minister responsible for the immigration portfolio. In developing the Québec Immigration Act, Québec took inspiration from practices in Canada, Australia and New Zealand. Under the new approach, foreign nationals must first submit an “expression of interest” in staying or settling in Québec. Then, from among the people who have submitted such a document, the Ministère de l’Immigration (immigration department) invites those who are admitted to submit a formal application for selection. The Act maintains the Minister’s power

to set conditions, by regulation, for selecting candidates for economic immigration, which includes skilled workers and business people. The grid used by the Government includes criteria such as training, work experience and knowledge of French. People recognized as refugees when already in Québec and “family class” immigration candidates are not subject to the selection process. Under this Act, the Minister is authorised to create both temporary and permanent pilot immigration projects. These programs will help meet the needs of a region or an economic sector and will run up to five years. The Act also allows foreign nationals who are temporarily staying in Québec to file an application for permanent settlement. It aims to improve access to permanent resident status for skilled workers and international students in Québec. Justice and Transgender With respect to justice and human rights, the National Assembly passed Bill 103, An Act to strengthen the fight against transphobia and improve the situation of transgender minors in particular, on 10 June 2016. This Act was preceded, in 2013, by amendments to the Civil Code of Québec to eliminate the requirement that a person have undergone medical treatment or surgery before the designation of sex on his or her act of birth could be changed. However, this only applied to people aged 18 or older. In 2015, the National Assembly’s Committee on Institutions held consultations on a draft regulation on this subject. The Committee then recommended that the Government quickly take action to improve the lives of transgender minors and that it consider extending the rights already granted to persons of full age to minors. The Act passed on 10 June 2016 addresses that recommendation. It gives minors aged 14 or older (or, with the minor’s consent, one of the parents or tutors) the right to apply for a change of designation of sex in the register of civil status.1 This request must be accompanied by a letter of support from a health professional and by an affidavit sworn by the person going through the process. Applications concerning children under 14 years of age can only be submitted by one of their parents or tutors, who must inform the

other parent or tutor. If the latter is not informed or objects before the courts, the application will be refused, unless there is a compelling reason (Civil Code of Québec, new s. 71.1). Finally, the Act to strengthen the fight against transphobia and improve the situation of transgender minors in particular adds gender identity or expression to the 13 grounds of discrimination already prohibited by the Québec Charter of human rights and freedoms. Public security On 9 June 2016, the National Assembly passed Bill 64, the Firearms Registration Act. This measure provides for identification of the firearms present in the territory of Québec in order to support police officers in their investigations and interventions. It also seeks to ensure the enforcement of court orders prohibiting the possession of firearms. The courts make such orders when issuing convictions for violent crimes or, as a precaution, when a person’s health constitutes a risk to himself or herself or to others. The Act targets long guns, which correspond to the majority of guns and hunting rifles in circulation in Québec. Approximately 5% of all firearms are governed by federal legislation.2 These are ‘restricted weapons’ within the meaning of the Canadian Criminal Code, which include certain pistols, and ‘prohibited firearms’, such as assault rifles. According to Québec legislation, new firearm owners must apply to the Ministère de la Sécurité publique (public security department) to register their firearm as soon as it is in their possession. They must also give notice of a transfer of ownership. Moreover, firearms businesses (sale or repair) must keep an up-todate log on all operations involving the firearms in their possession. The Act states that no tariff may be set for its purposes. It includes penal provisions and a procedure for police officers—but not wildlife officers—for seizing firearms that do not comply with the Act. Six other Canadian provinces also amended legislation, allowing minors to apply for changes to their birth certificate so that it is consistent with their gender identity. 2 Firearms Act, S.C., 1995. c. 39. 1