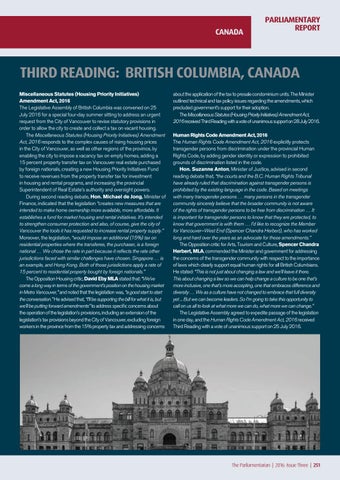 THIRD READING: BRITISH COLUMBIA, Canada Miscellaneous Statutes (Housing Priority Initiatives) Amendment Act, 2016 The Legislative Assembly of British Columbia was convened on 25 July 2016 for a special four-day summer sitting to address an urgent request from the City of Vancouver to revise statutory provisions in order to allow the city to create and collect a tax on vacant housing. The Miscellaneous Statutes (Housing Priority Initiatives) Amendment Act, 2016 responds to the complex causes of rising housing prices in the City of Vancouver, as well as other regions of the province, by enabling the city to impose a vacancy tax on empty homes, adding a 15 percent property transfer tax on Vancouver real estate purchased by foreign nationals, creating a new Housing Priority Initiatives Fund to receive revenues from the property transfer tax for investment in housing and rental programs, and increasing the provincial Superintendent of Real Estate’s authority and oversight powers. During second reading debate, Hon. Michael de Jong, Minister of Finance, indicated that the legislation “creates new measures that are intended to make home ownership more available, more affordable. It establishes a fund for market housing and rental initiatives. It’s intended to strengthen consumer protection and also, of course, give the city of Vancouver the tools it has requested to increase rental property supply.” Moreover, the legislation, “would impose an additional (15%) tax on residential properties where the transferee, the purchaser, is a foreign national … We chose the rate in part because it reflects the rate other jurisdictions faced with similar challenges have chosen. Singapore … is an example, and Hong Kong. Both of those jurisdictions apply a rate of 15 percent to residential property bought by foreign nationals.” The Opposition Housing critic, David Eby MLA stated that: “We’ve come a long way in terms of the government’s position on the housing market in Metro Vancouver,” and noted that the legislation was, “a good start to start the conversation.” He advised that, “I’ll be supporting the bill for what it is, but we’ll be putting forward amendments” to address specific concerns about the operation of the legislation’s provisions, including an extension of the legislation’s tax provisions beyond the City of Vancouver, excluding foreign workers in the province from the 15% property tax and addressing concerns

about the application of the tax to presale condominium units. The Minister outlined technical and tax policy issues regarding the amendments, which precluded government’s support for their adoption. The Miscellaneous Statutes (Housing Priority Initiatives) Amendment Act, 2016 received Third Reading with a vote of unanimous support on 28 July 2016. Human Rights Code Amendment Act, 2016 The Human Rights Code Amendment Act, 2016 explicitly protects transgender persons from discrimination under the provincial Human Rights Code, by adding gender identity or expression to prohibited grounds of discrimination listed in the code. Hon. Suzanne Anton, Minister of Justice, advised in second reading debate that, “the courts and the B.C. Human Rights Tribunal have already ruled that discrimination against transgender persons is prohibited by the existing language in the code. Based on meetings with many transgender persons … many persons in the transgender community sincerely believe that the broader community is not aware of the rights of transgender persons to be free from discrimination … It is important for transgender persons to know that they are protected, to know that government is with them … I’d like to recognize the Member for Vancouver–West End (Spencer Chandra Herbert), who has worked long and hard over the years as an advocate for these amendments.” The Opposition critic for Arts, Tourism and Culture, Spencer Chandra Herbert, MLA, commended the Minister and government for addressing the concerns of the transgender community with respect to the importance of laws which clearly support equal human rights for all British Columbians. He stated: “This is not just about changing a law and we’ll leave it there. This about changing a law so we can help change a culture to be one that’s more inclusive, one that’s more accepting, one that embraces difference and diversity … We as a culture have not changed to embrace that full diversity yet ... But we can become leaders. So I’m going to take this opportunity to call on us all to look at what more we can do, what more we can change.” The Legislative Assembly agreed to expedite passage of the legislation in one day, and the Human Rights Code Amendment Act, 2016 received Third Reading with a vote of unanimous support on 25 July 2016.