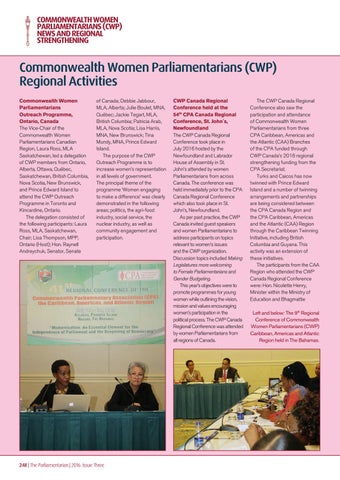 The CWP Canada Regional Conference also saw the participation and attendance of Commonwealth Women Parliamentarians from three CPA Caribbean, Americas and the Atlantic (CAA) Branches of the CPA funded through CWP Canada’s 2016 regional strengthening funding from the CPA Secretariat. Turks and Caicos has now twinned with Prince Edward Island and a number of twinning arrangements and partnerships are being considered between the CPA Canada Region and the CPA Caribbean, Americas and the Atlantic (CAA) Region through the Caribbean Twinning Initiative, including British Columbia and Guyana. This activity was an extension of these initiatives. The participants from the CAA Region who attended the CWP Canada Regional Conference were: Hon. Nicolette Henry, Minister within the Ministry of Education and Bhagmattie Left and below: The 9th Regional Conference of Commonwealth Women Parliamentarians (CWP) Caribbean, Americas and Atlantic Region held in The Bahamas.