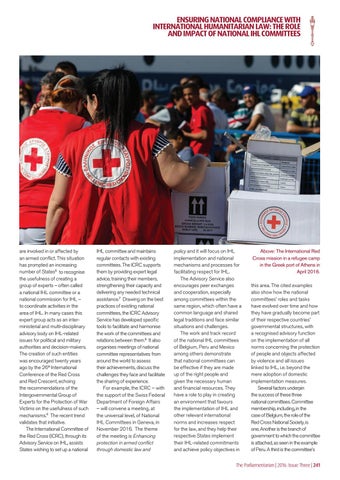 are involved in or affected by an armed conflict. This situation has prompted an increasing number of States5 to recognise the usefulness of creating a group of experts – often called a national IHL committee or a national commission for IHL – to coordinate activities in the area of IHL. In many cases this expert group acts as an interministerial and multi-disciplinary advisory body on IHL-related issues for political and military authorities and decision-makers. The creation of such entities was encouraged twenty years ago by the 26th International Conference of the Red Cross and Red Crescent, echoing the recommendations of the Intergovernmental Group of Experts for the Protection of War Victims on the usefulness of such mechanisms.6 The recent trend validates that initiative. The International Committee of the Red Cross (ICRC), through its Advisory Service on IHL, assists States wishing to set up a national

IHL committee and maintains regular contacts with existing committees. The ICRC supports them by providing expert legal advice, training their members, strengthening their capacity and delivering any needed technical assistance.7 Drawing on the best practices of existing national committees, the ICRC Advisory Service has developed specific tools to facilitate and harmonise the work of the committees and relations between them.8 It also organises meetings of national committee representatives from around the world to assess their achievements, discuss the challenges they face and facilitate the sharing of experience. For example, the ICRC – with the support of the Swiss Federal Department of Foreign Affairs – will convene a meeting, at the universal level, of National IHL Committees in Geneva, in November 2016. The theme of the meeting is Enhancing protection in armed conflict through domestic law and

policy and it will focus on IHL implementation and national mechanisms and processes for facilitating respect for IHL. The Advisory Service also encourages peer exchanges and cooperation, especially among committees within the same region, which often have a common language and shared legal traditions and face similar situations and challenges. The work and track record of the national IHL committees of Belgium, Peru and Mexico among others demonstrate that national committees can be effective if they are made up of the right people and given the necessary human and financial resources. They have a role to play in creating an environment that favours the implementation of IHL and other relevant international norms and increases respect for the law, and they help their respective States implement their IHL-related commitments and achieve policy objectives in

Above: The International Red Cross mission in a refugee camp in the Greek port of Athens in April 2016. this area. The cited examples also show how the national committees’ roles and tasks have evolved over time and how they have gradually become part of their respective countries’ governmental structures, with a recognised advisory function on the implementation of all norms concerning the protection of people and objects affected by violence and all issues linked to IHL, i.e. beyond the mere adoption of domestic implementation measures. Several factors underpin the success of these three national committees. Committee membership, including, in the case of Belgium, the role of the Red Cross National Society, is one. Another is the branch of government to which the committee is attached, as seen in the example of Peru. A third is the committee’s