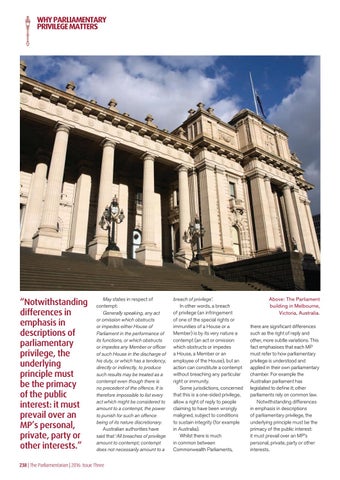 “Notwithstanding differences in emphasis in descriptions of parliamentary privilege, the underlying principle must be the primacy of the public interest: it must prevail over an MP’s personal, private, party or other interests.”

May states in respect of contempt: Generally speaking, any act or omission which obstructs or impedes either House of Parliament in the performance of its functions, or which obstructs or impedes any Member or officer of such House in the discharge of his duty, or which has a tendency, directly or indirectly, to produce such results may be treated as a contempt even though there is no precedent of the offence. It is therefore impossible to list every act which might be considered to amount to a contempt, the power to punish for such an offence being of its nature discretionary. Australian authorities have said that ‘All breaches of privilege amount to contempt; contempt does not necessarily amount to a

breach of privilege’. In other words, a breach of privilege (an infringement of one of the special rights or immunities of a House or a Member) is by its very nature a contempt (an act or omission which obstructs or impedes a House, a Member or an employee of the House), but an action can constitute a contempt without breaching any particular right or immunity. Some jurisdictions, concerned that this is a one-sided privilege, allow a right of reply to people claiming to have been wrongly maligned, subject to conditions to sustain integrity (for example in Australia). Whilst there is much in common between Commonwealth Parliaments,

Above: The Parliament building in Melbourne, Victoria, Australia. there are significant differences such as the right of reply and other, more subtle variations. This fact emphasises that each MP must refer to how parliamentary privilege is understood and applied in their own parliamentary chamber. For example the Australian parliament has legislated to define it; other parliaments rely on common law. Notwithstanding differences in emphasis in descriptions of parliamentary privilege, the underlying principle must be the primacy of the public interest: it must prevail over an MP’s personal, private, party or other interests.