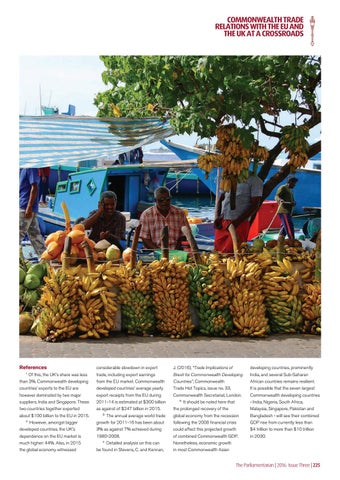 References Of this, the UK’s share was less than 3%. Commonwealth developing countries’ exports to the EU are however dominated by two major suppliers, India and Singapore. These two countries together exported about $100 billion to the EU in 2015. 2 However, amongst bigger developed countries, the UK’s dependence on the EU market is much higher: 44%. Also, in 2015 the global economy witnessed 1

considerable slowdown in export trade, including export earnings from the EU market. Commonwealth developed countries’ average yearly export receipts from the EU during 2011-14 is estimated at $300 billion as against of $247 billion in 2015. 3 The annual average world trade growth for 2011-16 has been about 3% as against 7% achieved during 1980-2008. 4 Detailed analysis on this can be found in Stevens, C. and Kennan,

J. (2016), “Trade Implications of Brexit for Commonwealth Developing Countries”, Commonwealth Trade Hot Topics, issue no. 33, Commonwealth Secretariat, London. 5 It should be noted here that the prolonged recovery of the global economy from the recession following the 2008 financial crisis could affect this projected growth of combined Commonwealth GDP. Nonetheless, economic growth in most Commonwealth Asian